Your Gender and Skin Color Have No Value 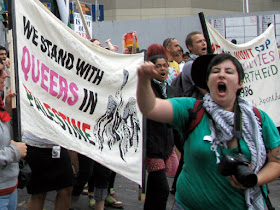 I try to stay in the real world.  It may not be nice but the rules are known and it is merocratic.  Typically if I work hard, I am rewarded hard.  I'm fully aware that things aren't always fair.  I am aware of the existence of luck and chance (both good and bad).  And I do not blame anybody but myself when I make mistakes or make successes.  But the best thing about living in the real world is it is sane.  It may not always go my way, but at least I understand WHY things are happening.  And by following this "real world political ideology" it confers upon me sweet and blessed sanity.

But then I got a peek into the world of academia.  A world where gravity does not pull down.  Your chromosomes do not determine your sex.  Being lazy should be rewarded.  And nearly all of its participants have NEVER set a toe  in the real world.  There's many a-strange things going on there, and the participants in academia are suffering from their insanity.  But one of the stranger things my buddy told me about in academia was a veritable and actual "hierarchy" among the liberal arts departments where the more disabilities you had, the higher ranked you were.

I'm sure most of you are familiar with the concept of this "Professional Whiners Arms Race."

And though most of us in the real laugh at this veritable bigotry, hatred, and insanity, the participants in academia take it VERY seriously.

You LITERALLY DO have more clout, more cache if you're a lesbian black woman who's disabled, than if you're a Latina straight woman (no matter how great your communist credentials).

As long as you can prove you are more of a mental, faux-disadvantaged nut case than the other guy...sorry...gal...sorry...zher, you will get preferential treatment in terms of hiring, made-work jobs, professional status, social standing, and, ideally, money.

But there is a message I would like to pass on into the world of academia.  The world of education.  The world of the media.  And any other insane world where people's gender, skin color, who they want to fuck, and what they identify as is viewed as being meritorious and valuable.

I'm going to say it again, in case you didn't get it the first time.

Traits, including yours', have no value.

And the reason traits have no value is two fold.

First, traits produce nothing of value.  Me being white, my buddy Richard being black, and my friend Kari being female produces nothing and offers nothing of value to anybody.  However, my buddy Kahn (gay) DOES produce something of value for society.  Not because he prefers to suck dick over bang pussy, but because he's an architect.  He builds beautiful (and safe) buildings that will house people, house businesses, provide something aesthetically pleasing for the public to look at, and save some money for the owner in energy efficiency.

I produce value in authoring a suite of books that, for what meager price I charge, will save you easily 100's of thousands of dollars in the future, not to mention decades of your life.  This is regardless of me being white or liking girls with big titties.

The real issue to understand with value is that it's a lot like beauty - it is not unto yourself.  It requires the acknowledgement and demand of other people.  You can't simply say "I'm beautiful" because it is other people (namely the opposite sex) that determine whether you are or not.  And "value" is the same thing.  Until you produce something of value that other people want, you are by all technical definitions a worthless human.

Second, you do nothing to earn your traits.  You're born with them.  Or perhaps you choose them.  But not one person in the world of academia's Disability Oppression Arms Race Industry has expended a calorie of energy "earning" their coveted traits.  They were simply born with them or lazily chose them.

Good for you. Your dad was black.  Your mom was black.  They fucked. And you came out.
No value.

Good for you.  You hate religion.  You're from a poor family.  You're a lesbian.  And you got a really neato tattoo to signify what it means to you.
No value.

Good for you.  You're a straight white male...BUT...you have the ADHDHDAspergerAustism-itis AND you can't shut up about being an atheist?
No value.

All of you lack the work, toil, challenge and effort it takes to actually ACCOMPLISH something.  To achieve something of greatness or just tangible worth.  And while you think you're being clever substituting your effortless traits in for hardship, toil, labor, and effort, it is in eschewing those things you deny yourself the galvanizing experiences that forge great people.  You don't start a business.  You don't employ people.  You do not pick fruit.  You don't even babysit.  You mentally masturbate over your traits (both real and imagined) because actually accomplishing something is too hard.  And thus you waste your life as an unmentionable and unaccomplished person.

What's really going on here is clear as day to anybody who isn't a low IQ moron or conformist.  You're all too lazy to work jobs.  You're all too sad and pathetic to carry your own weight.  But you can't very well come out and say, "we want the rest of you people to be our slaves so we don't have to work real jobs."  And so you make way for academia where the canard that "college students and college professors are smart" protects you from the non-critical-thinking person's eye.  American sheep vote in "more money for education" because you "just can't put a price on education" and you financially rape young American students of their tuition money for completely worthless and bogus degrees.  Even more vile you create and concoct entirely new and fabricated traits so even more people can get into the racket (it is no coincidence 435 genders and I would also contend ADHD, Autism, Aspergers, etc. were created so spoiled white kids from the suburbs could also play the victim game).  But the worst thing you do is cowardly hide your laziness and parasitism behind your traits, accusing anybody who accuses you of being a fraud an "ist" or an "ism."  Lucky for you most people are just too stupid too see through this Professional Victim Whoring, and those that do are often times too tempted by the easy work-avoidant life of being a professional victim whore themselves.

I am completely confident that the future will entail even more academics, students, and other work-fearing people.  I have no doubt academia will continue strong as you continue to endebt poor kids up to $150,000 for a degree in "Transgendered African Disabled Poetry" or convince Tanner "The SWPL" Swanson that he has social anxiety disorder, is disabled and is thus entitled to other people's money.  The sweet lie of a work-free life is very tempting and most Americans are too lazy and stupid to refuse it.

But there is a cost and it was what I referenced before.  Sanity.

To keep up the lie, especially in academia, not only do you have to spend an inordinate amount of time making it look like a profession, what microcosmic bits of genuine thought or intelligence have to be stretched out over a 4, 6 or 8 year degree.  Worse, if you wish to continue in academia, your thesis and "research" has to be on something new.  It's hard enough to write a thesis and do research, but it's impossible to do so on a topic of true nothingness.  Alas, if you read any syllabus or course description of any humanities or social science class it is a painfully verbose and euphemistic explanation of absolutely nothing.

But where the professional victim academic whores really drive themselves insane is where their fear of work is so strong, and their desire to be validated unsatiable, they will actually live the lie to the point of brain damage and insanity.  The Seattle councilman who actually thought sidewalk sprayers were "racist."  A 9 year old who thinks he's gay.  Professors who want genocide.  And an increasing number of professional victims who purposely make themselves ugly and mutilate themselves.  What minuscule, short, finite blip of life they had on the planet is not only a wasted one, but a tortured one.

But none of them for once thought their traits were of something of value or the reason for it.

Only the Professional Victim Whores of Academia and the fools that believe them think that.  And they pay a very dear price.
_________________________
If you enjoy truly thought provoking writing (aka "truth") like the above, consider checking out Aaron's other works below!
Podcast
Asshole Consulting
YouTube Channel
Twitter
Books by Aaron
Patreon
Amazon Affiliate
OlderBrother.com