Glorious Karl of Ushanka.us was kind enough to write a guest post.


Lost Trust, by Karl Ushanka
I’d like to think I have a good poker face. It has worked for me the few times I’ve sat across from Cappy. But if you pick up a copy of the second edition of my book, Trade the Ratio, you’ll see right through me. In Chapter Two I list, in 56 pages, the many old and several new reasons for considering an investment in precious metals. Thirty-nine of those pages are on the subject of lost trust. Want to guess what motivates my financial planning, including my silver and gold purchases?
I have lost trust in institutions that should never have lost my trust. From corporations, to all levels of government to quasi-government entities, these organizations have accelerated their race to the bottom in recent years. I have been reduced to only trusting friends and family, and to trusting the one-ounce silver American Eagle coin I’ve been carrying in my pocket for the past six years still weighs one ounce.
One could chalk this attitude of mine up to age-induced cynicism. No doubt that is a factor. But the degree with which these institutions have fallen is only lost on those within, and those blissfully ignorant. Unfortunately for us, they make up the majority of voters and they will win once they nominate a viable presidential candidate. Is there a bottom? If so, what will it look like when we reach it? Specifically, what can we do now to protect our assets when the looters take over?
I’m not the first to explore this concept. Aaron was out in front with this topic six years ago with Enjoy the Decline. He presented the topic of Non-traditional Retirement Plans in Chapter Five:
“While they may not provide benefits like matching, tax deductions, and an absence of capital gains, non-traditional investments may still prove to be the wiser investment. They are harder to confiscate, they will keep their value during an economic melt-down, they will have higher rates of return than any kind of “Solyndra,” and even if an economic doomsday scenario doesn’t play out, they at least serve the function of insurance.”
The Captain started his list of nine non-traditional retirement investment options with gold and silver. In Trade the Ratio I show how one can both hold these preferred assets and achieve a modest ROI by trading the silver-to-gold ratio. Loss of trust is the constant in these books, as is the realization that our world is not what it once was. 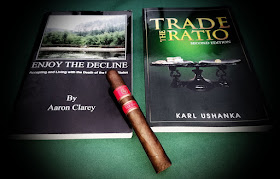 Instead of rehashing the examples from my book, here are two trust-losing events that have happened in the four months since I published my second edition: Mueller and the NRA.
We now know that the Mueller investigation lasted two years and was led by one of the most trusted investigators in DC. We know it cost the tax-payers over $25 million. We know that not a single FBI agent, of the 40 FBI agents who participated in the investigation, resigned in protest. The investigation risked the legitimacy of an elected president. We know it factored in the level of cooperation from the other side of every domestic and foreign policy debate and negotiation – all at a cost to us. And, as of last week, we now know that every person involved knew in October 2016 that the investigation was based on a politically motivated lie – a dossier paid for by the opposing political party.
We now know the FISA judge accepted the phony dossier without asking for independent verification, and authorized the FBI to run surveillance on an incoming president and his team. Every FISA warrant with any political nuance is now questionable. The integrity of every FISA judge is forever in question. To regain its standing, the FISA Court must be reorganized, starting with a full purge of existing personnel.
We now know the media had access to the dossier and knowledge of the investigation from the start. We now know the media would leak details of this classified information in order to then run stories on these leaks on their networks 24/7. Not that we would ever assume journalistic integrity exists, but now those on the other side have even lost trust in the media.
There is no one in the FBI that can restore trust in that organization. It is full of posers and quota-hires who put politics and pension above oath and duty. It must be dissolved. To save the FBI, to save us, we must burn it and scatter its ashes.
Because no congressional investigation will right this wrong, we suffer the realization that our representatives do not represent us. Because no attorney general’s investigation will right this wrong, we now realize the rule of law is optional. Jail time, if any is ever ordered, will not right this wrong because the participants all chose the risks and are proud of their efforts. Nor will it deter their fans from trying it themselves. To them it was a noble calling.
No FBI agent will ever command the same respect a Bureau agent received during the Cold War. Every FISA court decision, no matter how important it is to our national security, will be in question. And now even leftists will join us in suspecting the media is a tool of the elites rather than a so-called fourth pillar of democracy. In fact, the only positive from this investigation is the undeniable fact that President Trump is, by far, the purest man to ever hold the office.
Trust these clowns? Nah. I’ll just keep clinging to my Bible, my guns and my bullion.
The NRA is rotten to its core. A few weeks ago, then-NRA President Col. Oliver North announced he was leaving the organization. This week we find out why - the organization is in financial trouble and has a serious leadership problem.
At least part of the NRA’s financial problems have been caused by the CEO and long-time face of the NRA, Wayne LaPierre. He racked-up $542k in stupid expenses. These include $39k in a single trip to a clothing store, and more than $200k in one month of air travel. We wouldn’t know this if an NRA insider hadn’t leaked the expense reports.
But it is not just LaPierre. NRA President, Carolyn Meadows, says the “entire board is fully aware of these issues. We have full confidence in Wayne LaPierre.” But Meadows doesn’t stop embarrassing herself there. Like the untrustworthy fraud that she is, she is upset “some people would resort to leaking information to advance their agendas.” Fuck her.
Previously a member, I always bragged that that NRA was the only lobbying group in the United States whose members didn’t view themselves as victims. It has had the largest membership of lobbying firms, now at five million. It has its shortcomings, the primary one being their priority of hunting and marksmanship over other forms of shooting sports and activism. But now their behavior has attracted the attention of the NY Attorney General’s office, which is looking into the NRA’s tax-exempt status. Thanks Wayne. Thanks Carolyn.
What bothers me is the NRA’s mission. It is the most noble: To protect the Second Amendment. It is no secret that the Second Amendment protects, and makes possible, all the other parts of the Constitution. Which makes LaPierre’s actions, and the rest of the management team’s callousness, unforgivable. They were trusted and supported by American patriots, and they discarded that trust. Their mismanagement might not qualify as a crime, but their actions have betrayed many, and perhaps given the gun-grabbers the edge in the next gun-control debate.
Betrayal is as old as man, but the pace and severity seems to be accelerating. It hasn’t touched you or me yet, but someday soon we will be told to “be patient, as we restore your account balance,” or “the FBI will not allow this to happen again,” or “we’ve made some mistakes in the past but we (the same people) will do better going forward.” Ya, thanks. But as part of enjoying the decline I’ve decided to sit here with my cigar and my poker face, and remove part of my life from a system that looks more fragile and more corrupt than ever before.
Captain Capitalism at 8:37 AM