Corporate Donations to BLM vs. Government Spending on the Black Community

As you may have noticed I don't do as much writing as I used to. This is in part due to writing the majority of a rather large book, a month-long cancer scare, the coronavirus, and the consequential podcast it spurred - "Good Morning Coronachan."  Throw in at least 3 consultations a day for Asshole Consulting, and there just isn't enough time left in the day to get to penning serious pieces of economic and political thought.

But I did want to write quick piece because it needs writing.  And when I say "needs writing," I do not mean that it needs to be brought to society's attention. Society never listens.  It needs to be written for posterity's sake and so we can reliably predict where yet another leftist idea will fail.  And that latest leftist idea that is doomed to failure is corporate donations to the NAACP, BLM, justice initiatives etc.

The short version is this - does the totality of all these corporate donations even hold a candle to the trillions of dollars the US federal government has spent on the black community over the past 50 years?

I do not have the time to go and calculate precise numbers but some back of napkin calculations boil down as this.

The largest donations from the largest corporations are coming in around $5 million (though amortized over 5-10 years).  Let's just assume all corporations in the Fortune 1,000 donate $5 million each, though very few are coming even that close. That adds up to a whopping...

To give liberals and leftist a visual demonstration, I've put together a chart because I know most of you truly do not know the difference between a trillion and a billion. 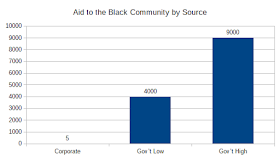 Obviously, if the multiple trillions of dollars has not closed the:

gaps between black and whites, this pittance of a fart of $5 billion will do absolutely nothing the same.  It may enrich some black activists who sit on the boards of these non-profits, but it will not do one damn thing to tangibly improve the lives of black people in the US.

It is here I behoove anybody of any political or racial stripe to be intellectually honest with themselves and acknowledge what this laughable joke of "corporate donations" are - Marketing.  Placating.  Danegeld.  Virtue-signaling.  These corporations do not care about black people, they care about themselves and are capitalizing off of a tragedy to profit.

It is also here I further behoove anybody of any political stripe or race to ask if trillions in money hasn't helped the plight of black people, would trillions more help?  Or is there something else causing the various health/wealth/income disparities between blacks and other Americans that first needs to be accurately diagnosed before we further commit resources to tackling this problem so that it might be effective?

Sadly, I know the answer - nobody actually cares about improving the plights of blacks.  People just see trillions of dollars (black people included) and it blinds them to long-term, permanent solutions that would raise black standards of living.  However, if any of you have the courage and bravery to actually look past "more money" and apply a critical eye to black poverty with the goal of ending it, you can find a much cheaper and effective solution here.

Best of luck and as always, enjoy the decline. 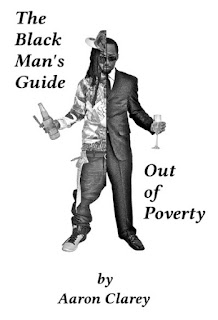 Captain Capitalism at 7:21 AM