Why are Sports Fans Such Idiots? 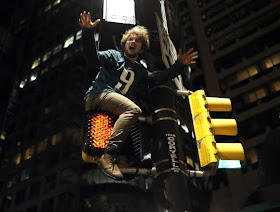 I've explained it before, but it bares worth repeating again.  For even though the Philadelphia Eagles have won the Super Cup, their fans have still decided to riot in the streets of Philadelphia.  So pour yourself a drink, light up a cigar, and get in a comfy chair as the Ole Captain explains to you the phenomena (and idiocy) of sports fans.

First, realize that if you are reading this blog you are smarter than the average bear.  This is not an opinion.  This is not speculation.  And this is not me trying to butter you up.  If you're reading a blog about economics, finance, philosophy, cryptocurrency, and western civilization on purpose, then you are not a dummy.  You are not stupid.  You very likely have an IQ above 115.  In short you are smarter than 80% of the population, the dumber half of which is so dumb and so far removed from you intellectually you simply cannot relate to them or understand them.

Second, most of my readers here have lives.  You have a STEM degree.  A profession.  Perhaps you have a family that is still nuclear and intact.  You do not have half-siblings or step-parents.  And when you have free time you spend it with family and friends, or perhaps on hobbies that are of intellectual interest.  You might play in a band. You might like to read. Some of you hunt, fish or hike.  Others rebuild classic cars or restore houses.  The point is if you have some down time, you typically dedicate that time towards some kind of constructive and rewarding activity that either improves you as an individual or brings you closer to family, friends, and loved ones.

Third, you have hustle.  You don't sit on your ass all day.  You probably have some kind of regimen or work out schedule.  You watch what you eat and at least make attempts to eat healthy.  And that says nothing about the efforts you put towards your education, career, entrepreneurial endeavors, or hobbies.  Yes, you might take a rest.  Yes, you might get hammered over a weekend.  But the lions share of your time is not idle be you at work or at play, as you are always aiming to improve your life.

Finally, you think.  You have independent thought.  You probably are suspicious of religion.  You don't believe what your teachers, professors, and now media personalities tell you about politics and the world.  You know enough not to watch filth like "The View" or reality TV or day time TV.  And you know a fancy sports car, a McMansion, or brand name clothes will NOT bring you success or happiness.  You get sick watching daytime TV and don't bother watching the "Grammys" or the "Oscars" because your life is just too short to be wasted on such pointless, meaningless things.

and take their COMPLETE OPPOSITE

and that my friends is your average sports fan.

A person who is;

Stupid (or horrifically conformistly average)
Has no point or purpose in life
Is lazy
And is easily susceptible, if not perfectly susceptible to indoctrination, brainwashing, and conditioning.

Now, even though it's impossible for people with an IQ of 115 or above to understand what it's like to be one of these people, just try.  Put yourself in their shoes.

You're not smart enough to have a profession or a career that is going to amount to much.  Worse, you're not smart enough to avoid life-crippling mistakes that will essentially enslave you to people smarter than you.  So as you flail about in community college, culinary school, or cosmetology class, you make sure to get pregnant or your girlfriend pregnant, while incurring $50,000 in student loans.  Of course, you're not independent minded enough to resist the marketing and brainwashing thrown at you by corporations and marketeers.  So you borrow even more money to buy cars, trucks, clothes, and trips you can't afford.  Making this situation not worse, but now IMPOSSIBLE, you're lazy.  You don't want to work hard to pay off those debts.  You don't want to work hard to become an accountant, a carpenter or an engineer.  And you certainly don't want to hit the gym and the treadmill that might actually make you an athlete or physically appealing.

And so what's the ultimate end result?

You are forever stuck in life being a loser with no point or purpose in life and nothing to look forward to.  You are forever financially crippled because you didn't use a condom or get an abortion.  And you are forever in debt because you're too damn lazy to work a second job or get an education that would make the first one suffice.  Oh, and by the way, you're overweight and ugly, which doesn't prevent you from achieving excellence in life, but it just adds insult to an already injured life.

There's just one problem - you're not going to die tomorrow.

If you were to die tomorrow, this misery would end.  The bill collectors calling. Explaining to employers why there's three bankruptcies on your credit report.  Getting pissed off because your co-worker got a $1.25 per hour raise and you only got a $1.00 raise. Not having enough to retire before you're 70.  Choosing between food or a Ram truck payment.  Oh and those student loans you got for that strip mall cosmetology school.  ALL of it would "poof" just go away.  But unfortunately you're going to live to at least 60 and you need to have something to give your otherwise meaningless life some meaning.

But what can lazy, dumb, conformist people do to give themselves a point and purpose in life?

Well the key problem is with the word "do."  That requires hard work, toil, thought, of which the majority of American sports fans are either incapable of doing or consciously choose not to do.  So what we need is an effortless way to give these otherwise worthless people some kind of worth in their lives.  Something that they can take pride in, even though they themselves would not expend a single calorie of energy achieving some sort of accomplishment.  And whereas religion used to fit this role nicely, going to church requires you wake up early on Sunday and go someplace you really don't want to go.

Whether it's football, baseball, basketball, or hockey, "sportsball" is incredibly attractive to the millions of lazy, unintelligent, conformist, pointless people that account for at least half of Americans today.  Their lives are helplessly destroyed beyond repair.  They either lack the intelligence or work ethic or both to get out of it.  But if you can get them to live vicariously through the achievements and accomplishments of others, they will gladly fork over a significant portion of their garnished paycheck for tickets, jerseys, training camps, cable packages, light beers and wings!  You can even get the taxpayers to WILLINGLY subsidize these various sportsball franchises to the tune of billions of dollars a year.  All a sportsball franchise has to do is set up shop in a large town, speak about hometown pride and how much they like "City X," sponsor some kiddie programs, get the local news to run some horrific "sports news shows," give away some shirts and some banners, and the agencyless sheep will line up from a 300 mile radius to give you their time, money, and tears.

But to truly understand why sports fans are such idiots, particularly when they are violent or ecstatic when "their" team wins or loses, it's key to realize what is truly driving their irrational emotion, be it anger or happiness.  It's because they have absolutely nothing else going on in their lives.  They have NOTHING of value in their lives.  Their lives are so void of meaning and purpose they fill this hole with the athletic performance of other people who have nothing to do with them and don't even know these people exist.  You may not comprehend why a guy cries when the Chicago Cubs win a world series, but that is his second coming of Jesus.  You may not understand why a guy screams at a television (often times destroying it) because his team didn't toss the sphere into the ring, but that is his entire life.  You cannot view sports fans from the perspective of reason and rationality.  You must view them from the perspective of the absolute lack of anything of value going on in their lives.  And if you do you see why their otherwise sad, pathetic, and irrational behavior makes sense.

I'd like to say the day is coming that these people will slowly wake up and realize that every sports game ever played has had absolutely no effect on the real world, let alone their lives.  That it doesn't matter if the Bulls beat the Golden Knights in extra innings or not, because your life does not change come the morn.  That sports is supposed to be for fun and entertainment, as well as the admiration of athleticism.  Unfortunately, there are so many sad, pathetic losers out there that sports is all they have.  And if they didn't have that, their minds would not be distracted and they would have to fully face the utter nothingness that is their lives.