How California's "Cal-3" Initiative Will Expose the Left's True Nature 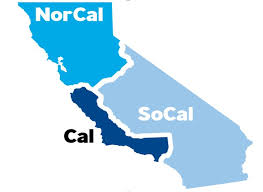 The nation should pay attention and pay attention closely to California's "Cal-3 Initiative," because it will be one of the rare moments an entire political party will expose its true nature to the world.  This is a rare sight, even rarer than last year's total solar eclipse, because most political parties have to hide their true nature, lest moderate voters find out what their true agenda is and vote them out of power.  In this particular case, "Cal-3" - the initiative to split California into three separate states - will force the American left and democrat party to show Americans their true colors.

How will this happen?

Well the left faces a paradox when it comes to California.  It claims California, specifically the cities, are leftist political, economic, and sociological successes.  They have banned bags, have emissions standards, pay for illegal aliens' education, and a whole host of other socialist merit badges that renders these municipalities "socialist utopias" in their minds.  But these socialist successes are the coastal cities of California, not the ignorant, heathen interior of the state that wishes to secede.  And the Californian left LOATHES the "ignorant, CIS gendered, white hick scum" that populate said interior.

So here's a question any moderate...or any American for that matter...should ask themselves:

If the left is so confident in its policies AND it detests the conservative scum in the interior of California, wouldn't they WANT to divorce themselves from the rest of the state?  According to them those rural and suburbanite ignoramuses are only holding the intellectually superior left back from achieving their true utopia.  Besides, I know I WOULD LIKE to get rid of leftists out of my state/city/county/country, so why wouldn't the left want the same?

And here is where their hypocrisy (and a complete debunking) of their socialist ideology lies.

Deep down inside the left knows it needs those "no good dirty, hickish, ignorant, suburbanite scum" because the left is completely financially dependent on them.  They don't want to admit it.  They don't even want to admit it to themselves, but the professional left knows an entire "theoretical leftist utopian state" of social workers, guidance counselors, politicians, teachers, environmentalists, non-profits directors, welfare recipients, students, and other varied sorts of parasites cannot survive without an economic host to tax and live upon.  The California coastal cities, and their socialist utopian dream, NEED the people they hate the most.  The reverse is not true as conservatives do not need socialists because hosts do not need parasites.

This is going to create an interesting situation for California's leftists.  They're going to be forced to tacitly admit to the world they need the rest of the state more than the state needs them.  This is doubly terrifying for them because it will also prove their "socialist ideology" (which is all these people have) is unsustainable, unfeasible, and simply wrong.  But ultimately if the left votes against Cal 3, it shows what they truly want - the continuing of the partial enslavement of other people.  And if the voting public can make that connection people will vote in droves for Cal-3 and kick California's coastal cities out into their own little socialist beds they made for themselves.  So what's a leftist to do?

Well one thing they can do is come up with red herrings that have nothing to do with what Cal 3 is fundamentally about (sovereignty, freedom, and the right of people to choose).  One such measure is already underway where these morally-better-than-you leftists are citing environmental concerns as to why they need to keep sucking off your taxblood you shouldn't break up California.  You can expect more cowardly moves like this to obscure their real reason in keeping Californians enslaved to the socialist coastal towns as the vote approaches.

But the biggest thing leftists can do is simply "nothing" because I have some good news for my fine Californian democrat friends.  And it's what has been saving the democrat party since the JFK years!

Americans, especially Californians are ignorant, low IQ morons.  And nobody is going to be paying attention.

In addition to convincing millions of people to commute and enslave themselves into traffic-congested leftist municipal hell holes, I have to tip my hat to the left in another regard.  You have done a SPECTACULAR job in brainwashing a full three generations to become non-thinking conformists who simply...don't think.  At best they spew simplistic, feelings-based leftist talking points they've been conditioned to in K-College, but most are more concerned about what's happening on Game of Nice Chairs, their addiction to social media, or what the latest idiocy is in sportsball.  And to think the average American idiot, let alone his inferior Californian cousin, is going to be smart enough to make the connection between the left voting against Cal 3 and their continued economic enslavement of working Californians is laughable.

So don't worry California leftists.  Your socialist fiefdoms and slave plantations are safe.  The slaves aren't even smart enough to realize how California welfare spending has resulted in California traffic, so you have a green light to vote against Cal 3.  Nobody is smart enough to see what's really going on.
______________
If you liked this article consider passing it along to a friend or sharing on social media!
Also visit Aaron's other cool sites below!
Podcast
Consulting
YouTube
Books
Patreon

Captain Capitalism at 9:29 AM