The Case for California Communism 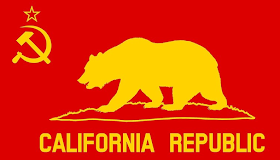 Even before the news that Governor Newsom decided to arbitrarily decree that California would ban the sale of gas cars by 2035, I was of the mind that California was already a quasi socialist state.  Combined with it's regulations, high taxes, and overall mental attitude that its political class/the state should not only own everything, but dictate what its citizens should think, say, or do, the State of California is the closest thing the US has to a socialist country.  But instead of fighting it, I argue we should take a lesson from our (in hindsight -very wise) forefathers and allow for "The Great American Experiment" where individual states can do what they want.  And of the now-50 states that we have, some of them - including California - should try communism, just to see what happens.

Against communism most of you may be, there is some incredible wisdom in letting some states go commie.

First, you never know.  Communism might work this time in spite of it failing every single time before.  And if politicians and social scientists can find a way where nobody has to work and we can all be infinitely wealthy, by all means, try it out on a population of 40 million Californians before applying it to 320 million Americans.  And if successful, share your secrets to success and end poverty not only in the US, but the world forever.  You'll be the biggest heroes in human history and will have genuinely advanced society more than any humans in the past.

Second, failing that (which it will fail), why force the entire country to participate in this experiment when the track record of communism is so horrific?  More often than not, communism kills and impoverishes its participants, faster and more effectively than a hot war.  It's a drug like meth that has done nothing but destroy the lives of those who get addicted to it.  But instead of trying to argue with the average American idiot that they shouldn't take this drug, let's grab the 40 million guinea pigs of California, force them into communism, and see what happens.  Lets see what lab results occur when we give a state full control and ownership over its citizens, before rolling it out for the remaining 49 states.  I've always laughed at the occasional story where a "communist" or "commune" restaurant opens up, only to collapse a few short years later when none of their customers pay and their employees never show up for work.  And I've pointed this out to people advocating communism saying, "Look, you guys can't even run a taco shop, what makes you think you can run a state?"  I think a test group of 40 million datapoints would be more convincing than a mere one off socialist restaurant financed by government grants.

Third, I can't think of a state that deserves socialism more.  California with its Californians have been sanctimonious, arrogant, faux intellectuals who have pushed their politics not only on its citizens, but the rest of the country.  Be it through its large presence in the house of representatives, to the tech giants of Silicon Valley lecturing us via virtue-signaling over their platforms, video games, and movies, California and Californians think they know better.

Well???  Prove it.  Stop talking about going full socialist and do it at your state, county, and local levels.  Vote in communists, confiscate all private land along the coast, nationalize all the farm land in the valley, take ownership of Google, Yahoo, Apple, and the entire tech sector, and implement whatever other non-financial communist policies you want like environmental laws, recycling laws, thought laws, educational laws, sex-relationship laws, everything.  If we're going to do this, let's do it right and do it 100% so we know what happens to a country when communism is implemented.

"They say you're an expert with explosives!  START PROVING IT!"

I am not so much talking your local farmer or your small time restaurantier.  I'm talking the big, large, corporations headquartered in LA and Silicon Valley.  Most of the business owners are leftists, and not just leftists, but use their companies to advocate and push for socialism.  Through the media, Hollywood, or social media, every day the rest of America gets to hear your sermoning and lecturing about how the rest of the country should be socialist AND how noble and caring your company is for advocating the same.

Well then the Mark Zuckerbergs, the Hollywood studio owners, and the Tim Cooks of the world should gladly give their companies to the State of California, forfeit their own personal assets as well, and start walking the walk they're advocating for when they're talking their talk.  Those assets are the only and best shot of California raising the funds to implement a socialist society, and the very first people that should be dragged up to Sacramento to be told they're forfeiting their companies and assets to the State are those business owners who've been fellating the State and socialism this entire time.

Idealistic as this sounds, understand this is already happening to a certain extent and is why I'm telling California to "just go for it."  California's taxes makes it the largest defacto shareholder of all private industry in the state.  Its state and local regulations make its non-financial world the Orwellian nightmare come true that many socialists want (consent forms for sex, hyper regulation, indotrination at the schools, etc.).  The people want socialism.  And even your business leaders are advocating for it.

So what's stopping you California?

For once we have the opportunity to see a real and large state implement communism without a shot being fired.  You have a "bold leader" in the form of Gavin Newsom who is obviously willing to implement communism.  And a population that is for it too.  Furthermore, it has been the dream of millions of social scientists, government workers, an ordinary American liberal arts majors to see socialism realized in the United States.  Welllllll???  We're waiting!

Naturally, I know this will fail.  Naturally, if Californians put their money where their mouths are, they will destroy their economy, society, and make the whole state look like feces-adorned San Francisco.  It will be the worst peace-time failure of an American state in all of US history.  But just like a child doesn't know eating too much ice cream will make him sick, you need to let these modern day petulant little children get what they want as there is no other way to learn.  And thus, instead of forcing communism on the rest of America, not to mention we could all save ourselves DECADES of life and time arguing about economics in the future, let's have it out right now.  Let's see California implement socialism.  Let's see what happens.  By all means gorge on all the communist ice cream in the world you want.  It will be the most productive economic experiment ever conducted in America and the entire country, even California, is bound to benefit from it.
_________________

Hey cool Gen Z'er kids!
Want to end up like the Millennials?
No?????
Well make sure you don't by reading the book below! 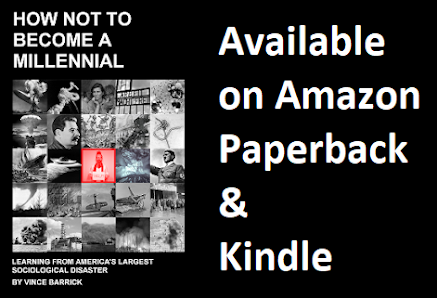 Captain Capitalism at 8:56 AM