Only Blacks Created Stuff in America

I don't know how long this will last, but I found it interesting that when searching for a mural of American inventors, Bing's search algorithms went ape-shit affirmative-actiony and produced this for an image search.

I took a screen shot for posterity. 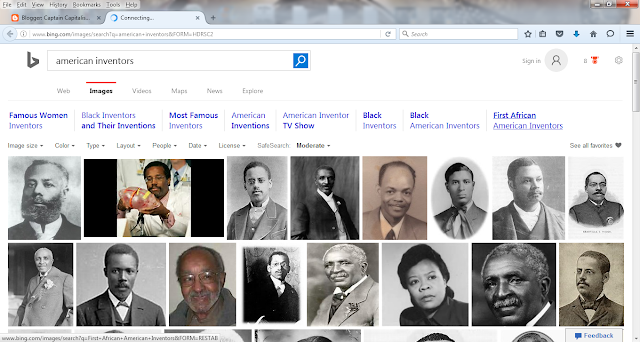 At first I thought "Bing was Broken," but then it dawned on me with the universal and omnipresent push to plug diversity, minorities, etc., between academia, the media, and the government, I would not be surprised that the logical search algorithm assumes you are looking for black American inventors and not the traditional American inventors.

Regardless, touche leftist, multiculturalist, revisionist, marxists.  Touche!
Posted by Captain Capitalism at 10:23 AM

Blacks have been the recipients in three of six award categories: eleven in Peace, two in Literature, and one in Economics.

They have invented and produced very little. Period.

Another reason for me not to use Bing (the first and foremost being that it's a Micro$oft product).

I don't know about Bing, but when you do the same search in Google (even more leftist), you get something only mildly better. When you click the images, the title usually mentions "African-American Inventors." Though the first image, entitled "Famous American Inventors," shows a picture of Franklin, Graham-Bell, and Samuel Morse.

Unless things have changed, Google's results are responsive to site hits, so as to say, the most site hits get that site image to the top of the search-results list. This leads me to believe that it's simply more popular, probably due to leftist cultural domination nowadays, to narrow one's search of inventors to the African-American diversification aspect of it. As good as the Internet is, there are more leftists even in cyber world. I guess you could also say the WWW is not immune to the Curse of the High IQ demographic issues (catering to the mean).


i am not suprised. i did a search on "famous white guys in history" after wanting to comfort myself with a little reality after aunt jemima was put on the 20 and jackson was thrown in the ashbin and my search apparently decided i really wanted to know about famous blacks; i didn't have one link of famous white guys. i would figure i'd at least get white guys.

(and you know that jemima will be what the 20 is going to be called. pure brilliance. if they are looking to divide the nation further; mission succeeded).

Google is the same.

Several references to BET running a "Blacks in science" series, but that should not distort everything. Always nice to see the social engineering in process.

When I did it a few token white guys came up...

google - traditional white girl and look at the images.

All the search engines are Fubar.

Took until the 7th row for me to get a white guy, and row 22 before I had a row that wasn't majority black.

I think it's time to switch search engines.

We've been over this before: the search engine is catching the "American" part of "African-American." No conspiracy here, sorry.

leeholsen: The 20 will be known as the "tubby". And there will be much gnashing of teeth.

Its affirm ative action when black people invent stuff? Are you guys really that illogical?

Even with the over-the-top PC search engine - nearly ALL "American Inventors" are images of MEN..

So it gets *that* part correct at least.

They can't even dig goddamm well on their own yet.

Apparently, no members of any other ethnic group invented anything at all.

Bing seems to include "African-American" in "American" searches.

If you want to eliminate the "vibrancy" search "American inventor -african".

Blacks DID invent ragtime and jazz.
But that's been universally known for quite some time and has no relation to any PC "diversity"/"minority" movements.

Try using "white" or "black" respectively instead of the P.C. terms when you run searches like that. You'll actually get results closer to what you're looking for. Apparent search engine algorithms aren't functioning under P.C. criteria.