Bored as I often am in a car I'm not driving, I was surfing teh interwebz and it dawned on me,

"What the heck happened to Conan O'Brien's ratings after he opened his yap and decided to lecture the country about banning AR 15's."  And so off I went searching for the data and found it.

The answer?  Not much: 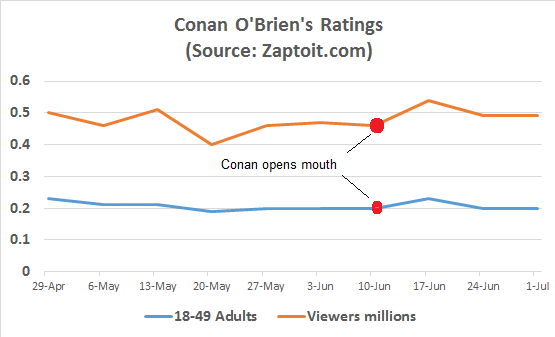 While I was expecting a rather large drop, the truth is his little sermon actually boosted his ratings among both total viewers and the (I guess the "precious" or "important" in the TV world) "18-49 year olds."

Though temporarily.  After his little attention-whoring political stint, things went back to normal for Conan.

This further cements two theories I have about people and their behavior.

One, any news is good news aka "Did they spell my name right?"  I have personal experience with this as the single best week in my entire career for boosting readership and subscribers came in the same week I received the most death threats - when I theorized Mad Max would be a feminist SJW lecture.  This sent the tabloid world into a tizzy and boosted my permanent readership by 20%.

Two, conservative, republicans, libertarians, and even pro-gun folks are just a bunch of pussies when it comes to boycotting.  I would have thought Conan had at least an apolitical market.  And thus an assault on the 2nd amendment would have taken a noticeable and permanent toll on his ratings.  Apparently not because, like Target, you conservative, SWPL republicans just can't be inconvenienced in your life to go without your precious late night CoCo.

In the meantime, I don't want to hear any complaints about the media, actors, Hollywood, Target, etc. from the Suburbanite Right.  You're all too soft and pansified to sacrifice the simplest of things for freedom.
Posted by Captain Capitalism at 10:33 AM

apple, starbucks, target, ..any others?

It is usually very tacky and stupid when comedians weigh in on heavy social issues, particularly social issues that have little comedic potential; such as gun control. A rare exception is George Carlin, whose comedy is largely based on politics.

I lost a great deal of respect for Chris Rock after he became Obama's anti-gun spokesman after Sandy Hook. It was cringe-worthy to watch an otherwise funny comedian squirm and struggle to be pseudo serious while talking about dead kids and gun control. It was quite a failure.

I would have thought Conan had at least an apolitical market. And thus an assault on the 2nd amendment would have taken a noticeable and permanent toll on his ratings.

I was always under the impression that the devout audience for late-night shows consisted of people without purposeful lives, and this no convictions about anything (e.g., bored housewives, the chronically unemployed, etc). Thus it doesn't surprise me that a normally "controversial" issue didn't even register with them.
Apparently not because, like Target, you conservative, SWPL republicans just can't be inconvenienced in your life to go without your precious late night CoCo.

Wonder how many people he lost the first time they waded into the debate, when his co-host made a dick of himself on social media?

That's like, all the people in comas who can't change the channel..

Alternately, it didn't drop his ratings among people like myself because I don't watch him to begin with, and the first I've heard of his little rant is you telling me about it here.

Banning guns isn't the answer to solving gun violence. If anything, it'll make it worse. The problem is, that those that are going to commit violent crimes aren't going to follow the law the same way that law abiding citizens are, it's ridiculous that "banning guns," would stop illegal gun crimes. This is the same with drugs. Even though drugs are outlawed, people still find a way to get drugs.

Check your assumptions. What percent of Conan views identify as capitalists or supporters of the second amendment? I'd say based on the response - very few. I suspect most of his viewers fall into the category of "I don't know, and I don't want to know." sadly I have no data - and I just can't raise enough interest in Conan to look for any.

Considering I maybe watch 1-2 hours of the idiot box a week, I am amazed that a no talent hack like Conan still has a teevee show with 500K viewers? Who are these people?

I doubt my boycott will be effective, since I started boycotting Target when they pulled their gun cleaning equipment from their shelves 30 years ago. Yes, they used to have gun rugs, Hoppe's number 9, etc.

Welcome to the club, however late you may be.

I also think Starbucks smells like vomit, and never cared for Apple. But then again, I'm an old fart.

I'm with Ryan. Didn't even know about this. But Target is different. Haven't been in it and won't let my family in it. They truly are forcing the issue. Only way to deal with that is to not provide them a revenue stream.

"Two, conservative, republicans, libertarians, and even pro-gun folks are just a bunch of pussies when it comes to boycotting"

Cappy you miss the point of Conservative behavior. Cons don't boycott, they buycott. They go into support mode for what they think is essential. A prime example is when Libs suggested depriving Chic-k-fila out of sales. The Cons went on a buying spree of purposely going to the company. Sales went up 15% during the period.

Hard to stop watching something I don't watch to begin with.

Target's business has tanked since the bathroom controversy

I definitely stopped watching Conan after that idiotic rant. I know he has to pander to his liberal bosses and he's a flaming limousine liberal himself, but I reallllly don't like people telling me false information.