Is There Another Housing Bubble?

Because of the news and talk and social media and anecdotal stories about the return of NINJA loans, people have been asking whether there was another housing bubble and whether we could expect another crash.  So, since this has become an increasingly common question, I decided to put some research into it and the answer is

The primary measure by which we gauge whether or not housing prices are sane is the "price to rents" ratio.  Very much like a "price to earnings" ratio for stocks, the price to rents ratios does the same thing by comparing the value of a house versus the rents it can generate.  And if we look at this ratio today we can see that though a touch above historical averages, housing prices are nowhere near a bubbly as they were in 2006: 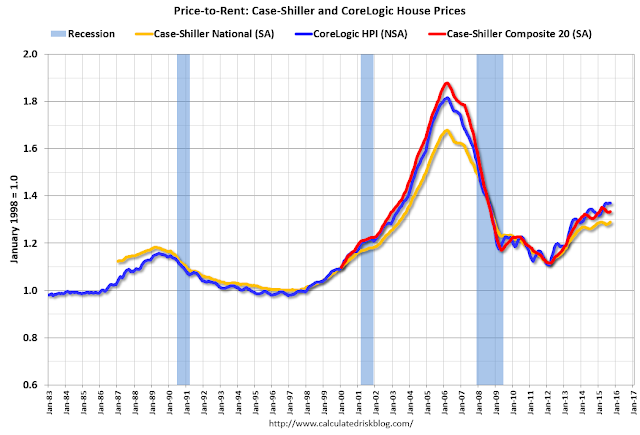 Normally I would stop here because this would provide the definitive answer, but whereas the above chart looks at the demand for housing that drives values (rents), I also like to look at the other side of the economic equation - supply.  And here, once again, we are nowhere near the insane levels of supply we endured in the mid 2000's: 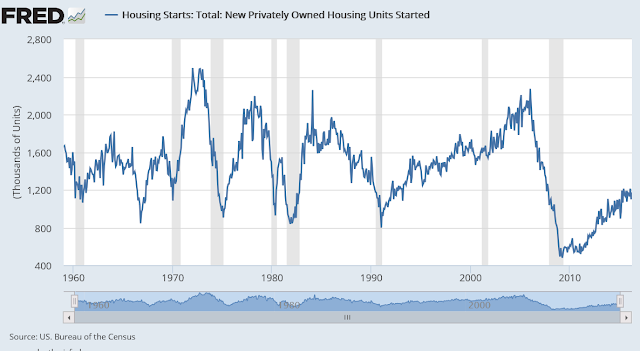 So while yes, there is technically a bubble, I would not be freaking out just yet about an imminent housing collapse like we saw in 2007.  I would be more worried about the collapse of our currency than the collapse of housing prices at the moment.
Posted by Captain Capitalism at 10:44 AM

As someone in the housing industry, it feels like 06/07. Clients behavior is the same. I also don't trust your graphs. Most urban areas the prices have recovered beyond 2007 levels and gone well past, it is rural and ghetto areas keeping your charts down. I have in the past month started to sense a change in the air though, just like the summer of 07. I might be wrong, but on the front lines I would have to disagree with your assessment.

The bigger problem is that if price to rent went to 1.0, there would be bigtime credit collapse that would have to, once again, get mopped up by the rest of us. But that's alright, I don't mind paying for everyone else's shit over and over again.

Matthew, good point. It is really a local issue. I wouldn't be surprised in particular cities (again, Miami, LV, Phoenix) are pushing those insane limits again.

Mate, there is no bubble in the USA.

There is in Canada (Vancouver), Australia (Sydney, Melbourne) and New Zealand (Auckland)