Truth, as you know, is very unpopular today amongst the youth, the left and anybody whose entire life upbringing and self-worth has been based in lies. It's a topic I like to delve more into because I find it fascinating how resilient the human brain is to truth and reality when if you think about it, it's insanity to be resilient to "truth and reality." It's like saying, "I disagree with gravity." Or, "I don't like how electricity works." My favorite though is this trend where couples are bringing up their children "gender neutral" when it's quite plainly obvious whether their child is a boy or a girl. But never let facts (or a child's well-being) get in the way for psychotic, self-absorbed, political zealots in their pursuit of an unsustainable political religion.

You know, those stupid fly over towns where idiots live and carry guns.

Well gee whillikers and shucks howdy! The Commie towns have only experienced an increase of 10% in their economies since 2001 and those stupid morons in the sticks 30%. 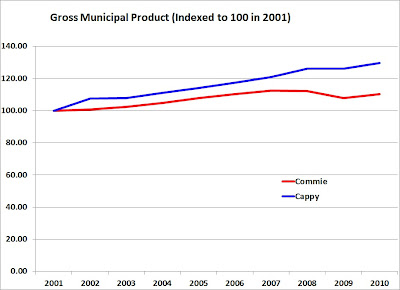 Admittedly there were other towns I probably could have included, but this was just a quick 1-2 I pulled together (failed to include Houston...but I can't think of a lot of "Conservative Towns." Most are pretty commie).

Regardless, you hipsters in those big "cosmopolitan" towns enjoy the decline.

Us stupid fly over hicks will enjoy the incline with all of our stupid oil and low taxes and everything.
Posted by Captain Capitalism at 1:25 PM

Perhaps what you need to do is create a municipal commie index and then you can create some interesting charts.

But bro..
We are redefining things to mean what people FEEL they are.
War is peace.
Freedom is slavery.
Ignorance is strength.
Gender is about your feelings.

Agreed, but we'll see how long that lasts. I mean, a guy who jumps out of a plane with no parachute can at least believe for a couple minutes gravity doesn't matter.

Is it possible for me to enjoy the benefits of Fargo, Rapid City and Sioux Falls without actually having to live there?