A Spectacular Failure of a Father 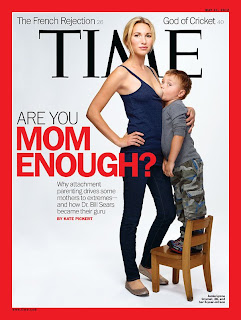 Blame feminism all you want, this is more of a damning conviction of the lack of real men in this country.

The Captain would have put his foot down a LOOOOONG time ago before anything like this would have happened with his theoretical wife.  Not to mention there is no way in hell I would let my child, ESPECIALLY A BOY, have this hanging over his head upon entering middle school.  This would be immediate grounds for divorce in the Cappy Cap home.

I predict she'll cheat on her husband, that's if she hasn't already...heck, I wouldn't be surprised if it isn't even the husband's kid.
Posted by Captain Capitalism at 10:12 AM

No way in hell is that kid only three years old.

Just this week I told my wife she better start setting some harder boundaries with our almost five year old because of what am Momma's boy he is, or he was going to end up a messed up beta wimp. Need to knock that stuff off to some degree early on or the development patterns are permanently entrained.

Extended breastfeeding is nothing new. It was once quite common in different cultures, parts of the world to breastfeed for several years. Eventually breastfeeding for extended periods went out of style and mothers who could afford formula saw it as a sign of their privilege to avoid breastfeeding their own kids.

Not "attachment parenting" is all the rage and some women want breastfeed their children for years on end again.

Just goes to show how anything can be thought of as a fad.

By age 3, your kid should be done. Biologically, that is the max range of when lactase enzyme production begins to shut down anyhow, unless you have the gene for lactase persistence, which by no means indicates a need to continue breastfeeding.

I BF'd my kids to one year each and beyond as they wanted it, but once started on solid and given the opportunity to drink pumped milk out of a cup, they chose the cup and the solids over nursing every time. BF'ing is important but it does have to end at some point (that being usually before 2 years of age is reached, and for the benefit of kid and mom alike). Even in cultures where breastfeeding until all teeth have come in (indicated readiness to chew meet and starchy tubers), it ends once the kid has adjusted to a new diet. This appears to be a SWPL/21st Century Problems phenomenon, wherein mothers are sooooo intent on proving their natural-mama-against-the-grain style they will breastfeed kids up to 8 years old just to differentiate themselves from plain old proles.

Why, oh why oh, does everything become a status symbol?

Duly noted, but this isn't the 1100's and it isn't some sh!thole third world country. This is the United States of America. We're entitled to our own morays and culture and in this country the majority of people do not breastfeed toddlers. And no I'm not going to respect "diversity" or "other cultures," as I'm sick of it and for once I'm standing up for my own (which has done pretty darn good by historical standards).

Beyond that, my main complaint is not the extended breastfeeding. I couldn't care what they do in their home. My complaint is the lack of modesty and a complete absence of a male influence with no regards to the consequences. But hey, if the country wants to go down this route, I'm all for it.

Just let me get my fold out chair and light up a cigar as I watch and enjoy the decline.

Maybe she's setting him up to be picked on by every classmate with access to Google in ten years. That way she can play "Mama Bear" and get her kicks screeching at the school administration for allowing her son to be bullied.

If you want to be a sick pervert and breastfeed your 3yro kid, be my guest. But to promote it on the cover of Time magazine...that's when I pray for Sen. Joe McCarthy's return to purge America of these gutter-rat Communists.

"My complaint is the lack of modesty and a complete absence of a male influence with no regards to the consequences."

If she's married--and I'm going to assume she is--then I'm sure her husband is aware of the fact that his wife is on the cover of a major magazine with her breast in the mouth of their son. There is no reason to assume that there is a 'complete absence' of a male influence--as if no man would ever allow his son to be breastfed until for 3 years.

"Duly noted, but this isn't the 1100's and it isn't some sh!thole third world country."

Not yet, but they're working really hard at it. Is Jerry Springer Lead Editor at Time?

Correct, phsycially there IS a "male."

However, there is NO, NONE, 0% male/manly influence.

A man would draw the line and say,

"The hell if you're going on the cover of Time Magazine with our child while breasfeeding."

A person who happens to have male genitalia, but not an ounce of true masculinity would let this woman do what she did.

I await for girls of that kids age to grow up and ask in their 20's "where are all the real men?" Just like they're doing today.

Extended breastfeeding is just the tip (no pun intended) of the "attachment parenting" trend iceberg that gives overly entitled self-righteous granola moms the feeling that they are doing the best thing by their child by allowing them to do whatever they want, whenever they want. It's called permissive parenting, it’s called lazy. I personally predict a gigantic split in the coming generation- as children with permissive parents have to deal with those with parents that actually care about their child's future- meaning they teach self-discipline, sacrifice and self reliance. The latter children are going to eat the 'attached' children alive.

HBO's Game of Thrones (and Martin's novels) are chock full of examples of women going mad without their husband's influence.

First you have Cersei, raising a 14 year old sadist to be the next king, who can't see beyond her own nose - at one point she pulls her son out of a battle where he was safer than most, causing a massive disertion, and endangering the whole city. She can't recognize her allies, lashing out at them.

Then you have Catelyn who shatters her son's military alliance, when she trades a powerful captive General for her two ~10 year old daughters.

And of course you have Lysa, utterly paranoid, who breastfeeds her 8 year old, sickly child.

And don't get me started on our actual monarchs. First we have Diana, who figures divorce is no big deal, and now we have Harry's new slut who flashes her ass on camera, and walks around like the man in the relationship. Gross.

Just imagine showing that, to someone back in the 1950s. Talk about a social decline.

I think the ring in the photo is on her pinky. You can see her thumb, and the ring is on her fourth (non thumb) finger.

3 years olde? My derriere. Kids lying to her aboot his age. Roosh would be proud.

Looks like a great got milk commercial to me..

This is nothing more than the dying MSM screaming for attention.

Just because she's wearing a ring doesn't mean that she's married -- this photo was staged, after all; and cover photos (like TV sitcoms) of MSM print rags are biased towards lefty IDEAS of 'reality', NOT the actual world. (Besides, this is the Photoshop era.)

And if wise people have learned anything, it's that looney leftist 'progressives' (I HATE that term -- what is "progressive" about them?!) have no idea of what the actual world is like outside of their little biased enclaves of LA, NYC, or DC.

More here at her blog:

Those depleated breast cannot possibly be producing breast milk. This is soooo wrong. Looks more like child pornography. This big boy is definitely damaged goods for all future relationships. She's probably getting off on it. Disgusting!!! Get a man and stop molesting your son in the name of breastfeeding.