Settle in young junior, deputy, aspiring, official or otherwise economists!  For we're going to have a quick lesson in economics that will help advance your understanding of this here US economy.

The "Inventory to Sales" ratio is a seemingly boring measure.  It takes the inventory of all the companies in the US and divides it by all those companies' sales.  You might ask, "why would they do this?" and the reason is very simple:

The reason this ratio has a decent track record of predicting recessions is because it measures future demand for labor.

Well to produce inventory companies need to hire labor.  And as these products are sold, the inventory goes down, requiring said inventory to be replenished, demanding further labor.  But if demand is low or sales are down, that inventory has a tendency to build up.  And when inventory builds up that is bad news for employees because with excess inventory why would you hire any additional labor?  Worse, if you have too much inventory, you might as well lay people off because you don't even need to replenish your inventory.

And so to measure this relative demand to inventory they came up with the inventory to sales ratio.  And it's not good: 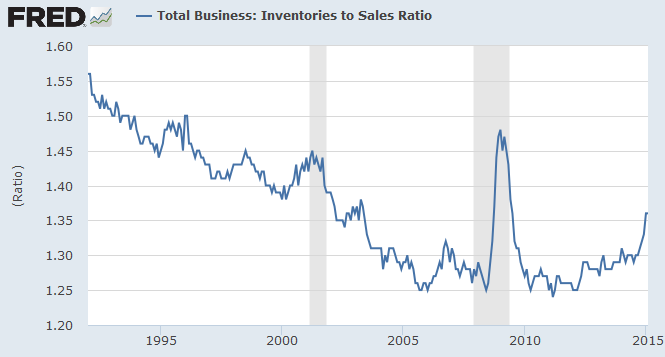 But what is particularly concerning is the recent trend upward in the past 2 years, along with a spike in the past 3 months.  Technically speaking, this is the second worst spike in the ratio's history and rarely does the economy NOT fall into recession when inventories build up this much.

Some of this has already come to fruition.  GDP for the first quarter of 2015 was a paltry .2%.  Labor force productivity is down this month.  And job growth is sclerotic.  But we haven't technically entered recession territory yet. Why?

Well, many people in this realm of the internet would claim we never recovered from the Great Recession.  And such cynicism is validated when you look at labor force participation, lower wages, and the lack of booming economic growth that usually follows a bust.  However, while we effectively may be in what "feels" like a recession and politicians brag about "green shoots" (but never full grown trees) in this economy, there is another reason we just "aren't crashing" like logic and reason would suggest.

The US dollar is the world's reserve currency.

In having the world's reserve currency this allows us to borrow and spend like Greeks, but without suffering any of the nasty economic consequences.  This allows the government to keep taxes artificially low, while pumping the economy full of government spending.  The result is a stale, uninspiring, and "blah" type economy where the real producers and innovators in the economy are not incentived to produce GDP, but steroid government spending artificially inflates economic growth figures.  Throw in the fact said government money (be it social spending or Federal Reserve QE) ends up NOT in genuine investments, but asset bubbles (housing, stock market, education, etc.) and now you can see why we have an economy with effectively 0% real economic growth, but a stock market that is on its way to trebling from it's 2008 lows.

The problem this presents to economists, however, is one of prediction.  By all measures and means we should be in recession. And if we were to take away the broken-window-fallacy spending of Obama's entire tenure, I almost guarantee you we never left the Great Recession.  But now that the government has limitless spending due to our reserve currency status, it can artificially pump up GDP, masking the real economy.

Ergo, I am predicting recession next quarter.  But don't expect to see two serious negative quarters of economic growth.  Like Japan the US will spend the next 20 years never giving its people incentive to produce GDP, but never letting the economy go into full blown recession.
Posted by Captain Capitalism at 11:21 AM

It's a little spooky you just wrote this article. I just recently saw the S&P 500 (1980-2015 chart) and thought to myself, "It's about time shit hits the fan. Maybe Cappy has written something about it."

Hi Aaron, thought this was a well thought out and very accurate post.
Keep up the good work. Also, I bought our 14 year old son a copy of Worthless, it is hilarious and outstanding. Changed his world view.
Regards,
Ralph

I think that with all the corruption and the fake vitality by gov. fiat force we ought to expect on 0% on the dot but a negative growth rate, since producers and innovators are being stifled. We know what you meant, no expansion, but furthermore we must have contraction. The question is can it get worse without a complete meltdown and gov. collapse. Nobody knows. This sure feels like a depression to me, but I see people acting normal, rush hour to and from work. The bread lines are virtual. I don't understand why things don't look bad out my window, on people's faces, unless it is because sheeple expect so little of what I expect and much of what we actually have. So I am left with tentative disguise, not sure what else I could be missing. I'd sure like to see sheeple suffer and this cultural rot get recycled with a renewal process that would make my life not suck. I wish I were a dumb ass sheeple. Ignorance is bliss.

Cheap oil should stimulate rest of economy, but gov't has incentivized against that.

1-3% GDP growth ain't great, but on an inflation adjusted basis it beats most of the g-20 nations. We;re never goign to get back to 40's era growth and that's not really a big deal. Law of large numbers and diminishing returns. It's just harder to grow an economy that is 10x larger at the rate it was growing when it was 10x smaller

Captain, just what would it take to finally tank the markets (let's say stocks, bonds, REITs)? Even if two consecutive quarters of negative growth appear, we might only see a correction like last October. I say 20% down at worst. We're in an artificially low interest rate environment (which can be maintained indefinitely?) and as you've mentioned before, people still throw money into their 401Ks like zombies. But valuations just can't go up forever, right? A bear market must happen eventually.