The Little Economy That Coudln't

"Malaise" is how I will forever describe the economy under the Obama administration.  Not because he's a socialist, and not because of any ideological difference, but just because that's what it's been.  Malaise.  RGDP growth has averaged 1.8% under Obama which is less than half of what it used to be during those evil and hated 40's-60's.  Even that hated Bush Jr., with the lion's share of The Great Recession's economic contraction in his figures, posted a 2.0% average growth rate.  But then I decided to pull up one of those old, boring economic charts I occasionally like to look at:

And you just can't help but toss your hands up into the sky, for it looks like the malaise will continue.

Inventory to sales, though boring, is a ratio I like to look at because it's telling about what you might be able to expect in our economic future.  Specifically, it is the ratio of corporate inventories to their sales and this ratio shows how much "stuff" corporations have on hand relatively to how quickly they're selling it (sales).

A decreasing ratio is a good omen for the economy in that if sales are up, that means there's demand for more goods.  Additionally, if sales are high relatively to low inventories, that is doubly good in that it implies corporations will have to hire more people to make more goods.

An increasing ratio however, is a bad sign.  That means either sales are low, inventories are high, or a combination of both which means low demand AND companies are likely to lay people off to eat through excess inventories.

Historically, you'll notice two things about the inventory to sales ratio.  One, you can see it spike right before recessions, and, two, a general downward trend (as inventory management techniques have constantly been lowering the amount of inventory relative to sales).  But during pretty much ALL of the Obama administration this ratio has been going up, especially so these past two years. 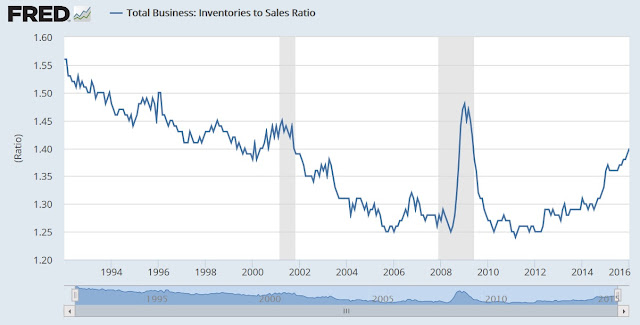 This isn't to say that I'm going to predict recession starting tomorrow.  Nor, is this to say employers are going to start cutting back on employees next week.  The truth is since the TARP bail outs, QE-X, and the fact the US has the world's reserve currency, neither our markets nor economy is functioning how they should, and predicting them is even more laughably impossible than it was before.  But I will take one huge gamble.  There isn't going to be any booming economic growth nor massive hiring sprees we experienced under Reagan in 1983 or Clinton in 1998 in the near future.  The malaise will continue until Obama leaves the presidency, and even then no real recovery will happen unless President Trump and an agreeable congress decide they want to aggressively pursue policies that result in a booming economy.

Regardless, for any of you millennials or young Gen X'ers that wanted that white picket fence, a nuclear family, and a stable career that could provide for them all, think again.  That American dream will not be available to you.
Posted by Captain Capitalism at 10:12 AM

You're correct to point out how notable it is to see increasing inventories in the face of constant efforts to reduce inventories as a way to reduce costs. This does not bode well.

The baltic dry index is looking horrid as well. Unless we can return to a manufacturing economy at least on a partial scale, I do not see us economically recovering . Glad to see you support Trump, watchout for a stray bullet to land between his eyes, potentially from the secret service.

But you may be cherry picking data - choosing a chart that agrees with your hypothesis and ignoring the strong data such as consumer spending, credit conditions, the low unemployment rate (which I know excludes ppl out of the labor force), profits & earnings, and exports.

Us GDP growth is back to where is was in the early 90's and early 2000's. Not that great, but not recession. And higher than Japan and probably all of Europe.

Given how much larger the US economy is, It don't see it returning to 40's or 50's era growth even under the most optimal conditions. Most of the low hanging fruit has been picked. But also, inflation was much higher in the 40's and 50's, so real GDP growth isn't that much higher, as shown below:

The chart you gave only goes back to 1992. I would need more data to know if rising inventories are a leading indicator or spurious.

"... and even then no real recovery will happen unless President Trump and an agreeable congress decide they want to aggressively pursue policies that result in a booming economy."

So what would you think is the most probable means to achieve a booming economy?

As an old Boomer I lived thru the Reagan economy and what we had then is nothing like we have today. Reaganesque like solution won't make it this time.

It seems like the general theme of the economy with Obama has been stability. Though that probably has more to do with the Fed.

Problem is, after the worse recession in 80 years, "slow and steady" isn't usually what one looks for.

Says who that the economy is not functionning like it should ?

Then what makes you think that the government can change the laws of economics ?

I know that force and aggression is frowned upon by you libertarians because it's the only thing efficient in the hands of the masses to undo what is being done to them economically. Your non-aggression principle only serves to keep the rich rich and the poor poor.

But force and aggression is part of nature and you cannot wish it away. If you're going to appeal to nature you will have to take it all and not just cherry pick the parts that serves you while omitting the parts that don't. It's in human nature to use force to gain an economic advantage in a zero sum game.

If we include force and aggression in the picture then it all makes sense and things are working exactly like nature wants it.

I understand that your truncated world view is frustrated by the government's use of force. But according to Fermi's statistics and Jack Donovan, force is never evenly distributed. There will always be a strongest and a weakest.

The government has the strength necessary to frustrate your incomplete economic model and the only way you can impose your model is through force by becoming even stronger than the government. I dare you to try.

Economists should serve in the military and gain combat experience before they practice economics.

Only then would they understand why real world economies never function exactly like their models on paper.

The reason is because, by natural law, there will always be people that live by the sword.

In other words, Clarey, impose YOUR model by the sword or shut up and stop complaining. There is no in between.

Uh oh, a little millennial anarchist is without his pacifier!
Too bad Cappy believes in the non-aggression principle and is perfectly happy letting the Americans destroy their own country. He needs something to entertain himself.

I don't worry about the broad economy, only my personal situation. Doing fine, thanks.

One bright spot in 2016 is the inventory-to-sales ratio of Glorious Hat. Hat sales are booming thanks to the Democrats embracing soft-communism by running Hillary and Bernie. Watch for a "Help Wanted" guest post by Karl - coming soon!

And to add to the Captain's warning - it took three years for Reagan's policies to show traction. And that was after only four years of the second worst president in US history.

I wonder if any of the increasing inventory has to do with an aging population. I have a good secure job with a high wage, but I don't spend that much money on "stuff" anymore because I have all the "stuff" I need. Instead I have a very high savings rate as I plan for the next phase of my life.

Malaise is a good definition for it. As long as the government continues massive deficit spending, and the fed continues with abnormally low interest rates to prop things up, there won't be any booming markets anytime soon. The economy is setup to discourage saving and investment and encourage consuming and spending. People are congratulating Obama on low 4.9 unemployment figures but they don't even look at the fact that labor participation has dropped 4 points under Obama as well.