It confirmed something that everybody knew;

Correlations came in around -.3.

What got me about this data is that very few Republicans, Libertarians and other varied sorts of capitalists knew of this data and would largely rely on anecdotal evidence to support capitalism as the optimal economic system. Sure, they'd use logic. Or cite the utter and dismal record of communism in the glory days of Stalin, Chairman Mao, or modern day Kim Small Jong Il. But never really went out to see, "well, what tends to happen when countries are taxed at a higher rate."

Anyway, so I updated the figures with the most recent OECD data and, well, yeah, communism still sucks. Sorry dems and libs. When you argue against the truth, well, it's uhh...kind of hard to win. 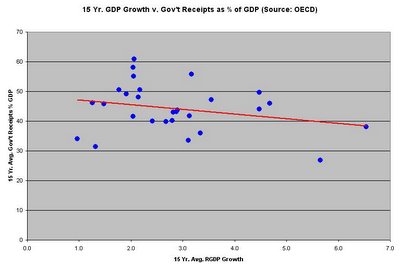 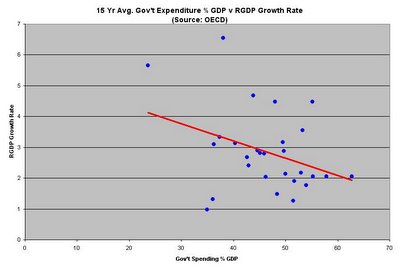 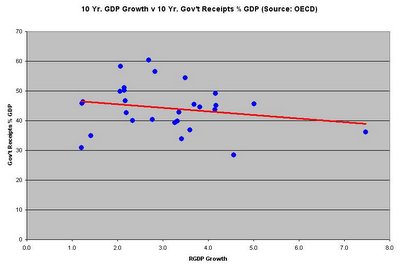 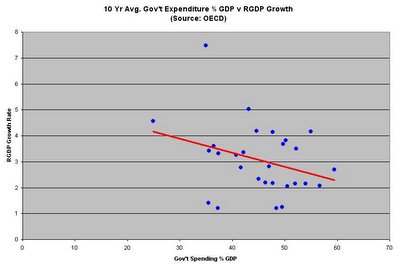 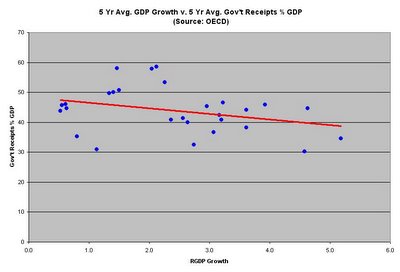 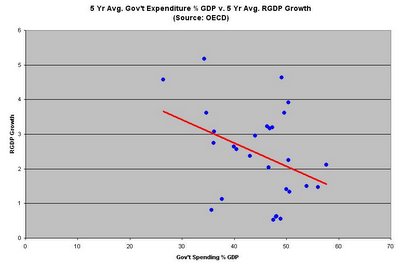 Posted by Captain Capitalism at 6:05 PM

Derek Jensen said...
This comment has been removed by a blog administrator.
4:57 PM

What is the p value of the coefficient on the first chart?

Cripes Jensen! It's been like 10 years since i took stats and my subscription to mini-tab ran out in '95. I'm sure it's not statistically significant, there's only 27 or so data points. That being said, that's all the data that we have to run such a correlation. Out of the 176 countries, only the OECD has reliable and long enough data to run those correlations

I can only guess that it is Slovakia

Ok, so I dusted off my old college stats book and looked up P-value.

The data set for the first chart has a p-value of .49. Not statistically significant.

I'll have to check the outlier on that one later. It could be Slovakia, although I think it's probably Ireland.

Captain, you are correct. With only 27 data points, and assuming a 95% confidence level, the minimum correlation coefficient that would be statistically significant is approximately .375. Anything less than that could, emphasis on could,be attributed to random chance.

Great web site. I will be visiting often

I used a t-test calculation (used to know this stuff much more thoroughly in my youth). I was under the impression a P-value of .49 would be the cumulative of the two tails?

Why are liberals such sticklers about confidence intervals and statistical significance when it comes to proving capitalism works, but not when it applies to second hand smoke and cancer rates?

In general I would speculate because it advances their cause and is to their benefit.

However in OneLiberal's case, he knows enough about stats I'd speculate he's pursuing a masters/doctorate in sociology or something akin to that. I'd also speculate that OneLiberal is not necessarily the brainwashed fool you might make him out to be, but perhaps a liberal that actually takes the time to research the stuff first...which would be the first one I've ran into and which would also guarantee he'd inevitably turn into a capitalist.

My stickler for statistics has to do with my job, implementing Lean Manufacturing, Six Sigma and DFSS at American companies in the hopes of keeping Americans employed in the manufacturing and service industries, nothing to do with my political positions. Besides, I always remember the quote that is variously attributed to Voltaire, Mark Twain, and Harpo Marx: "There are lies, damned lies, and statistics".`

You will join the Dark Side.

As a design engineer who for 25 years designed weapons of death and destruction, I like to think that I came out of the dark side...

None the less, great blog and I will be back!