Women of the World Unite...If You're Not Sick

Found this chart whilst doing research to see if oil is the main reason Norway has been doing so well (it is). It shows days of work lost to inactivity (health, sickness, PTO, etc.) for various OECD countries and they break it down by age and sex. 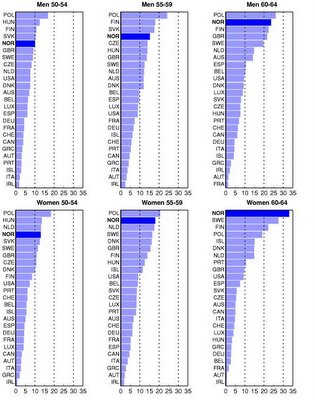 I don't believe. You didn't source the data.

Now, most people would accept what I've posted here as true as I cited the OECD. Most people would say, "Oh, the OECD. Reputable organization. And given he was looking for oil information in Norway the context of this research wasn't biased to find out why women make less than men."

But no, this SOB wants the exact URL and then should that URL change over the years, he wants it changed too.

Now, as I was saying, this argument that women make less because of sexism and blah blah blah, is largely one to benefit women unfairly painting them as a victim (which seems to be a popular tactic by the left nowadays). Just some more information to show you why I don't bother listening to those idiots.

Again people, economics is not that hard. The harder and smarter you work, the more wealth you have. And damn could I go for a redheaded Irish girl with a doctorate in economics and an aptitude in playing Halo.
Posted by Captain Capitalism at 3:40 PM

And damn could I go for a redheaded Irish girl with a doctorate in economics and an aptitude in playing Halo.

Not only are they not sick. They are financilly prudent, and had a nice North Sea Oil discovery, which boosted their economy a bit.

I think one of the main things is that they are financially prudent, hard working and honest.