Two Charts from the U of Berkeley

My Sister is a communist at the U of Berkeley in California where she is pursuing her doctorate in Bio Chemistry and her lab wanted me to throw these two charts up there; 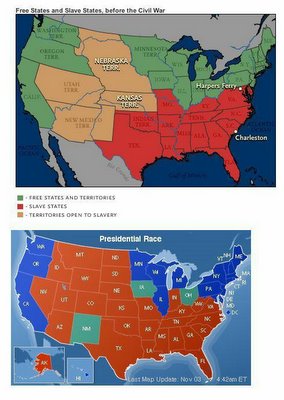 I suppose I am to take from this graph that all Republicans today want slavery as there must be a correlation between voting patterns in 2004 and slave legality in 1862. I guess I'm supposed to also forget the fact that it was the Republican party that waged a civil war to free slaves. But that's just what I'm guessing. 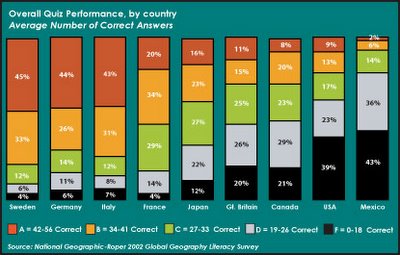 The irony here is that no doubt the majority of Berkeley academians voted down the California proposition last week to require teachers work 5 years before they get tenure. Last I recall California was ranked 46th in the country in terms of education and accounts for a plurality of our population.
Posted by Captain Capitalism at 11:41 AM

Not only that but 1 out of 3 high school students in California drop out of high school according to a television commercial. The teachers must be doing a superb job, let's give 'em tenure from the first beginning and save the suspense.

What I love is how the Californians don't realize that they get to sleep in the bed they've made.

You Chief Economist of Goldman Sachs yet or what?

I am an unhappy citizen of California, and I realize the bed we have made. I voted Yes on Props 74-77. They seemed like such rational propositions, but the people opposing them advertised lots of false information. I don't think tenure should exist, period. A review every six months should be required. If you are doing your job, it is not a problem. You should look forward to your review.

I take part responsibility, because I have not found a way to get across to people that we need to stop spending wildly, that money won't fix the schools, and many of the other problems that keep us from flourishing.

Keep ridiculing us. We need to change our ways.

It's called Capital and Intellectual Flight.

You and the few capitalists out there can't fight the overwhelming odds of socialism out there.

Communists. :| How can you allow your sister to be a Communist?

To get that data owuld take more time than I have here and I just basically pissed away a bunch of time crunching numbers today only to find the data inconclusive.

No, my sister is not a bona fide communist. She's just suffering from brainwashing in academia. Of the opinion that all it takes is smart people and if we "just gave education more money" some how all the world's problems would go away.

When she starts making $80,000 out of college and sees $40,000 of it go to taxes to pay for that fine educational system they got in CA, she'll actaully take the time to look at the budget and she'll come around.