Everything Wrong With MGTOW

In one simple picture. 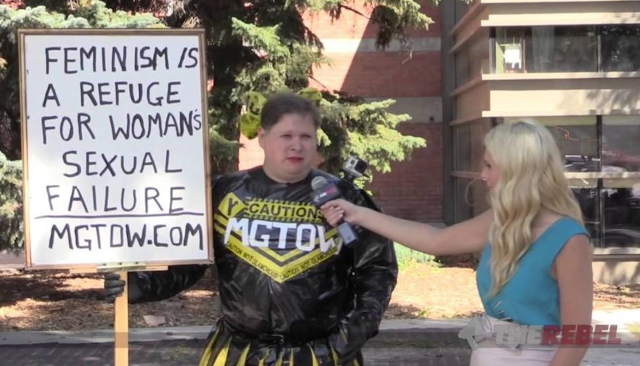 I'm going to be brief on account it's Friday and I think we've gone over these topics before, but I think a convenient, consolidated recap here will prove helpful:

1. How Much of it is "Ugly Feminist Who Can't Find a Man" but Reversed?

One of the things that tipped me off to the fake MGTOW movement was the nature of the problems and complaints men had about women.  It was confirmed once I started hearing concepts like "Incel" and "TFL."  And though you could not "totally" confirm as they hid behind avatars of 17th century philosophers, medieval knights, and anime characters (though I'm guilty of that), you could just tell they were men who did not keep themselves in shape, were not attractive, and instead of doing something about it, rather take the easy route and (just like feminists) shame and lecture women for "liking the bad boy alpha with muscles, money, and a motorcycle."

Real MGTOW's have more important shit going on in their lives than to protest a feminist protest.  And we certainly do not have the time to make a body of armor out of ducktape to do so.  This poor soul obviously still cares about what women think as he spent lord knows how many hours of his precious life to do this.  The mere fact he's trying to bring attention to "MGTOW" shows just how much control women still have over him.   Closely related to this...

3.  Crusaderism/Lack of Purpose and Agency in Life

Again, real MGTOW's are out there doing shit with their lives.  They are not going to protest...well...feminists protesting.  They will have a hobby, a craft, friends, a business venture, some books to read, a family to raise, mountains to hike, landscapes to paint, girls to nail, even video games to play.

This guy and many other "MGTOWs" do not.  They have nothing more going on in their lives than to mire themselves in how they've all gone MGTOW which is no different or lacking in accomplishment than Laci Green claiming she's "pansexual."  Inevitably the "GTOW" has to become part of MGTOW.  And since that takes effort, sadly, I'd estimate 30% of self-proclaimed MGTOW's (primarily the cultists on the internet) never do.  And sadly they never really join the remaining 70% of their authentic MGTOW brothers.

Ultimately, however, the problem is that MGTOW by its nature is a silent movement, a philosophy, a quiet choice.  YOu simply "go ghost" and live your life a different way.  This leaves the academians, the theoreticians, the wanna be's who pound away at keyboards and throw vitriol on YouTube.  Worse, it leaves the likes of the above (who by no means defines MGTOW's) define them to the outside world.  And ironically, it accomplishes the EXACT OPPOSITE of what the crusaderist arm of the MGTOW's want as society doesn't take them seriously, but mocks them and writes them off.

Anyway, today I'm going to hit the gym, bang out some miles, listen to the Ancient War podcast, practice a speech I have coming up, go swing dancing with my girlfriend while having dinner with friends, then I'm going to prepare my truck for a roadtrip out east to visit fellow fans and bloggers.

I will not be donning plastic homemade armor and protesting a feminist protest.
Posted by Captain Capitalism at 11:14 AM

I bet they "wouldn't go their own way" if a lady gave them the time of day. Same with feminazis.

I could be wrong, but is he wearing makeup?

This guy has no idea what's going on. If there's one thing that women are, it's sexually superior to men(as far as performance is concerned) and also more desirable to want to have sex with(i still dont see how women can stay with a fat, hairy guy unless he's got a fat wallet but you can still have fun with a fat girl if the boobs are proportional).
It's up to him to not give a care about it.

I think you are correct about silently going about the business of being a man. This has been my creed for a long time. This past summer I put 7000 miles on the victory going all over America and Canada in extreme conditions, and it suited me well. True gentlemen need not advertise their choices, but they should be aware of the true nature of our modern anti male culture and how to thrive in it.

I admire the courage of the man in the picture.

That dude in the photo is totally trolling.

Dude looks like everything a MGTOW shouldn't be with one exception , he's got guts enough to stand up in meat space. That's worth a chunk of respect in my book.

All good points but I have to suspect that the photo might be a visual troll. That is way too extreme and plays right into the groups that want to dismiss MGTOW as a joke. Or he might just be an absolute gomer, but the setup there is too much. Tape clothes?

Yeah, women are sexually superior but you'd be surprised how much power men have in countries where both sides are playing ball. With 80% of women in the US opting out in favor of Haagen-Dazs, the power of a young women who has long hair and can at least recognize a squat rack is just so far out of hand.

MGTOWs remind me of the civil rights movement - a dynamic in which a faction of Black people have a co-dependent relationship with whites, and employ the agency of white liberals. These people have nothing going on in their lives and, thusly, have no value. I thank the good Lord for Black nationalism.

The man in the picture is obviously a feminist shill/plant/stooge, paid by the VICE magazine journalist, to make MGTOW look bad. MGTOW do not protest against feminists at all, let alone dressed in superhero costumes and lipstick, because MGTOW are men with dignity and self-respect. Protesting at feminist rallies dressed in superhero costumes is something that is only done by MRAs (like Fathers4Justice) and other morons who still erroneously believe that women give a damn about the plight of men. In fact, MGTOW do not talk to women at all (about men's issues), because they are smart enough to understand that all women are amoral manipulative psychopaths who experience pleasure seeing all men suffer and die.

To emphasise, the entire distinction between MGTOW and Men's Rights Activists, is that Men's Rights Activists are Activists, as the name implies, and MGTOW are not. The whole reason MGTOW is a distinct philosophy is because some Men's Rights Activists realized after decades of arguing against feminism, that activism is not effective because most men, and all women, do not care about men. Men (like Aaron) who defend women are part of the male dominance hierarchy and will piss on other men for female acceptance; and engaging with women in any rational, logical way is utterly futile.

The source of that photo is this video. The interview starts at the 3:13 time and lasts under one minute.

Love the "cool kids never complain" arguments that assume MGTOWs are losers. We're not a movement any more than cord-cutting was a movement, just a bunch of people reaching the same,logical conclusion within temporal proximity. Totally spontaneous.

Of course MGTOWs want sex, just like cord-cutters want cable, but that doesn't mean we can be exploited because we want something.

Calling a MGTOW a loser ignores that he refuses to play your rigged game in the first place. When MGTOWs post to feminism tags, they're called stalkers.

MGTOW is the natural outcome of the PUA movement. The PUA can be rejected because he risks rejection. Since MGTOWs ask for nothing from women, they can't be "shot down," and women cannot stand it, because a MGTOW is just a rejection-proof PUA.

MGTOW will probably grow and become as large and influential as the feminist movement. Eventually, MGTOW will become like the herbivore movement in Japan - there will be a large class of men that aren't starting families, getting married or pursuing careers.

You really think there's no such thing as INCEL? Oh right... you've never been married.

That's why I'm not a mgtow. I've just decided my life is better with no wife or kids. Had the chance 3 times and been in many failed relationship. I will occasionally date, mostly just for something to do.

I don't hate women and if I ever found the right one I might change my mind. However since I don't really look anymore it seems unlikely.

Mgtows, MRA's, etc. They do some good but I get annoyed when they are all whiny and try to shame women into changing their behavior. A true mgtow wouldn't care what women think or do.

I wish women the best as long as they don't try take my money or my job.

The podcast reference was nice! I've developed quite an interest in history recently as I'd like to draw possible parallels to what's going on today, so that was a nice resource to be linked to. Thanks!

I don't consider myself a mgtow, mainly because I refuse to live in the way some in the "community" think is the way mgtows should think, act, live and believe. Last I checked, it was supposed to be going MY way, not THEIR way.

I may be more of a BTDTHA (been there, done that, had enough).

To be fair, wasn't it you, Aaron, who once said only maybe 1-2% of women tops are even marriage material? My experience, although anectdotal, seems to bear that out.

While I could entertain the possibility of some sort of relationship, and do have someone showing interest, after the last one I wouldn't want to combine finances or share living space again. I saw firsthand just how much the legal system is on women's sides in relationship disputes.

I got out with my life, possessions and skin intact, but until we have a more even handed legal system, I won't put myself in a position for their abuse again.

If TPTB want to fix marriage, then they should fix divorce and the legal system first.

Meanwhile, I have better things to do.

Sorry ladies: this prize of a man has gone MGTOW and is no longer on the market. Your loss....you'll just have to fine someone less manly.

LOL- Laura Southern is pretty damn cute and intelligent. If she came onto him in a believable way he'd be pussy-whipped in 30 seconds.

So this sorry incel dude represents MGTOW? You won't find any MGTOWs at a protest FFS.

It really is scraping the bottom of the barrel to make a weak larger point.

To: Aaron Clarey aka Captain Capitalism
I am glad to see that you calmed down about MGTOW men and even more so about VGTOW men. The best way to look at MGTOW men and even more so VGTOW men is more women for the men who want to bother with women. This is especially true with VTOW men. I know you have nothing against MGTOW men especially if they were PUA men first, but don't have anything against VGTOW men as it means more women and more opportunities for the men who try.
Sincerely,
doclove

You once said that there are no ugly people, only lazy people. While I don't fully agree with you because some people are truly truly deformed and crippled by defective DNA etc.

This guy's "ugly" problem seems to be mostly FAT. Eating less and exercising more would definitely solve his problem.

Being not ugly, he might have a lot more chances with women and not be a mgtow anymore.

wtf is this shit