I See Cartel, Not Competition

Usually, it is said that women are very competitive with each other.  Women would prefer NOT to have women bosses in that there is competition.  Women are always competing with each other for men.  Heck, if you ask why women dress the way they do, it's not even for men - it's to compete against other women.

But while i'm sure there are strains of competition among the fairer sex, I unfortunately see more cartel-like behavior than competition.

For those of you who don't know a "cartel" is a group of companies that act like a monopoly.  For example OPEC is a cartel of different countries that produce oil.  Their intention in forming the cartel is to maximize profits.  They do this by acting as a team, and not competing against each other.  You can also see this when Lucky Luciano formed "organized crime."  Beforehand the various crime families were fighting each other for territory.  Luciano realized working together the different crime families would not only have lower deaths, but increased profits.

Regardless, cartels are deemed "bad" because they invariably result in higher prices for the consumer.  This is why we have trust-busting and anti-trust legislation and usually break up monopolies - so many companies are competing against each other constantly improving quality and lowering prices.

I don't see that however in the "highly competitive" arena of women.

One chart if you will: 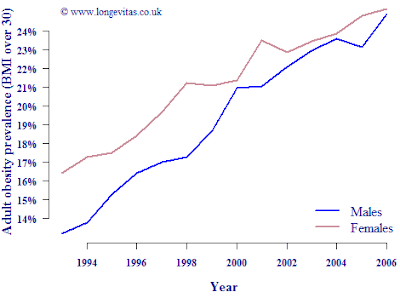 Admittedly both sexes are just as guilty, but what this chart shows me is that there is definitely no competition going on between women in the pursuit of men.  If there was the pink line would be trending downward, not upwards. Further cementing my case women are cartelling and not competing is when you combine this with their prohibitive attitudes towards dating, courtship, and marriage, not to mention their insanely long and unattainable "requirement lists" of men. Women, unconsciously or not, are keeping the supply artificially low in order to command the highest price.  No man is good enough for them, despite clamoring for "why can't I find a good man" and "where have all the good men gone?"

However, there's a funny little thing about cartels.

Sometimes a member of the cartel will "cheat."  Meaning they will break away from the group and act in their own best interests.  An example would be the oil embargoes of the 70's.  OPEC managed to drive gas prices sky high in severely limiting the supply of oil.  Prices got so high, however, members of the cartel were VERY tempted to produce a "little more" oil than they were supposed to, thus netting them significantly increased profits.

I ask the question, "why aren't some women doing the same thing?"

The reason I ask was I was discussing with a friend of mine about how simple it would be for women to snatch a man today.  All they have to do is:

That's it.  That's how low of a quality product the cartel has made.  All an individual girl has to do is these five basic things and she will pretty much blow away all of her cartel sisters.  She can snatch a man, just like that.  It would be like being asking an adult to compete against 1st graders in a 2 mile run and the prize would be $5,000.  HOW CAN'T YOU COMPETE???

This is not a question about, "how come you don't want super awesome guys like us?"  It's more of a question of why, with it being so easy to compete, don't you?  If "finding a man" means that much, how hard is it to hit the treadmill, lose 10 pounds, show up on time, not play mind games, and just follow those five commonsensical rules?

Alas, I'm an economist.  Not a social-pscyhologist.  And thus, I'll just sit here bemused wondering why OPEC isn't selling more oil at $450 a barrel.
Posted by Captain Capitalism at 7:57 AM

Opec found that if they raised the price of oil too high, oil consumers would look for and even start to actively develop alternate sources of energy.

Western women are about to find out the same thing. As we men know, it's actually already happening, but the wymmyns are still in denial.

As I've said before, these types of entries of yours are my favorite.

Cartels ALWAYS cheat. I learned this in basic econ. While the cartel is in competition with its customers, each member is still in competition with the other members to maximize their own gains. OPEC has never been able to get their target price through manipulation. market supply and demand Drives oil prices.

It's already happening. I'm 20 and have been reading manosphere blogs for the past two years, and try put everything I learn into action. When another girl ask what's my secret to dating is I tell her about the manosphere and whatch the transformation. First I make sure she's the kind of girl who deserves a great guy. I also try to tell the guys I've dated about the manosphere. I've been really surprised by how many of them lack the desire to even get informed, and there are lots of uninformen men out there!

Women by and large don't want just any man or even a good man.

Finding a good man is trivially easy for any woman who

- is not actually physically repulsive,

- knows how to dress appropriately for the occasion (as men understand the concept),

- has some basic life skills,

- is not agnonizingly boring to talk to.

But your model has a flaw. You're assuming women compete with other wmen for mens' affection (or resources).

Actually they're competing with other women to impress them with the caliber man they can find. A man with good moral characer who has and can keep a job and has basic home skills (ie not a complete, disgusting pig) is not very impressive. It's like two year old shoes - a great fit but not going to impress the other girls.

it's safe to assume that any woman who seems to be nice or kind is simply putting on an act in the hope of ensnaring a sucker to fleece.

Ever hear of the crabs in the bucket mentality? Basically if one crab is in a bucket it can climb out easily. You put two or more in there and they all pull each other down and none of them ever get out of their peril.

That's the mentality of women. The minute a sister sees the light and does things right to improve herself...shame will come from the harpies, the feminists, and all the other brainwashed cows.

I'd marry that woman you described in a heartbeat. I think I can simplify it even more for women.

Be an asset, not a liability.

I think the clearest examples of cartel behavior in modern society are labor unions.

They attempt to drive up the price of labor by restricting the supply, and when people are tempted to "cheat" by undercutting the union, (either by working for less or working during a strike) rather than the cartel falling apart as it would in a free market, it maintains its position by violence against the "cheater."

Union violence isn't just some weird side effect of herd behavior; it's absolutely essential for a union to maintain its power and position.

One small nit to pick:

Quote:
"This is why we have trust-busting and anti-trust legislation and usually break up monopolies - so many companies are competing against each other constantly improving quality and lowering prices."

This is insidious progressive propaganda justifying ad hoc manipulation by captured regulators. Surely you are familiar with both the Austrian and Public Choice critiques of anti-trust: