According to DudeBroWallStreetFratBoys the Stock Market is Never Overvalued

A new generation is upon us and I know this not only because of common sense and basic demographic information, but because there's been a recent spat of college age/20 somethings who have critiqued my earlier work about the stock market being overvalued.  Naturally, my criticisms go back to even before the financial crisis, but this was when most of these finance-majoring DudeBros were all of 10 years old.  And now, equipped the little, microscopic, and misleading information that comes with a degree in finance today, these know it all FinanceMajoringDudeBros are going to set the ole Captain straight about how his predictions have not come true, and that they are going to somehow be smarter and better than their baby boomer and Gen X bailed-out bankster counterparts.

So let's beat this dead horse one more time.

There are two measures we use to gauge whether a stock is worth the price.  Price to Earnings (or the "PE" ratio) and the Dividend Yield.

The PE ratio is simply that - the price per share divided by the earnings per share.  It shows you what you are paying in stock price per dollar in earnings.  The higher it is the more overvalued a stock is and vice versa.

The dividend yield is the same concept, except we flip the numerator and denominator AND replace earnings with dividends (because you technically only receive dividends, not the total earnings per share of the company).  Instead of a ratio (like the PE) you get a "yield" or "percent rate of return" on your investment.

And so when we look at both you can PLAINLY see that the market is severely overvalued. 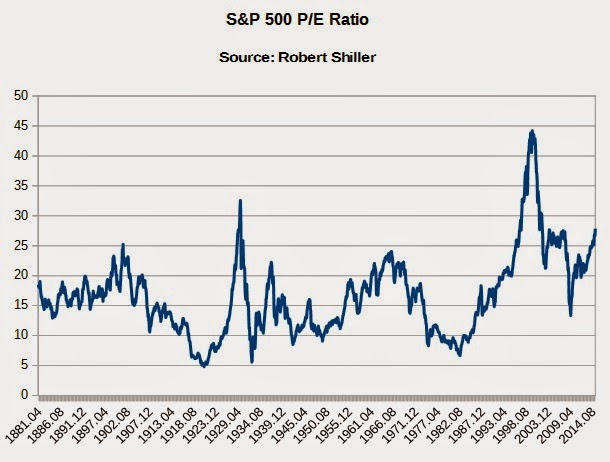 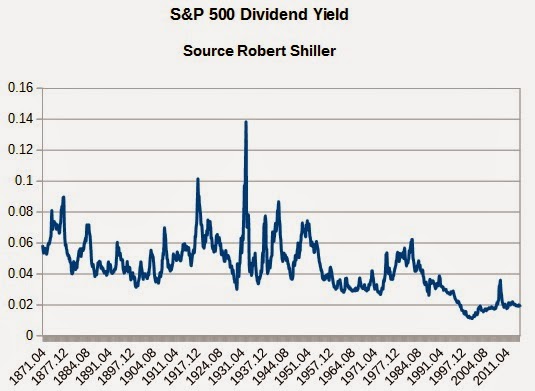 The historical average PE for the S&P 500 has been 15.  It is now trading at 27.  If you are a DudeBroFratBoyGoldmanSachsFutureBailoutRecipient, ask yourself a simple question.  Is it worth paying nearly $800 for the PS4?  Is it worth paying $7/gallon in gas?  And is it worth paying $50,000 for a new AVERAGE sedan?  Because paying a PE of 27 for a share of stock is no different.

The dividend yield is even worse.  The historical average for the dividend yield has been 5%.  You could expect to receive a 5% annual rate of return in the form of dividends.  Today it is 1.8%, a 277% overvaluation.

Of course, before we pick on future DudeBroFratBoysofAmerica we have to look at ourselves in the mirror.  For while the DudeBroFinanceMajorsofEternalDudeBroness merely parrot what they're told by their charlatans posing as business professors, at least they're not investing in the stock market because they're poor college kids.

The same cannot be said, however, for the millions of obedient, conformist, non-thinking Americans who year after year throw trillions of dollars into their precious 401k and IRA retirement programs.  For they are the financially-illiterate zombies that do not take their advice from the likes of Shiller or Schiff, but the 24 year old HR generalist who "strongly recommends" investing in the company's 401k plan *tee hee!*  And in doing so inflate the stock market beyond all sane and reasonable measures of valuation, not to mention price out younger generations (if they are smart enough to read articles such as these).

The point is that there are three major things driving stock prices higher than their fundamental warrant.

With the Fed printing off money so it can buy treasuries, mortgages, and other unwanted securities off of the banks' hands, the recipient banks of these monies invariably invest said monies in the stock market driving up prices.

With interest rates very low, it becomes profitable for corporations (ie-shareholders and executives) to borrow at these low rates and repurchase the company's shares.  This drives the value of their shares up more than the interest expense the company would have to pay on its debts.  Of course, this leveraged buyout ignores whether it's worth paying a PE of 27 for its own shares, further fueling the bubble, AND it ignores what would happen if the economy were to tank while they have so much debt on their books, but hey!  We drove the stock price (and thus our stock options) up another 200%, and that's all that matters!

This is the deadest piece of the horse I've beating since 2004.  Why, oh why, did the government just magically decide it was "the stock market" that would serve as the primary vehicle for 300 million Americans' retirements?

Why not property?
Why not private businesses?

Matter of fact, what business was it of the government's to provide tax incentives for people to invest for retirement anyway?

Pfa!  Who cares, it was "well intended" and that's all that matters.  Distortion of the stock market be damned.

In the end, the same mentality that occurred in 1998 for the DotComs, in 2006 for the housing market, an in 2009-present for the education bubble is reappearing again today in the stock market.

and my all time favorite

"This time it's different."

And while yes, this time it is different (as the Fed has now made the stock market a place that is a viable long term hedge against inflation, NOT a place to invest in an actual company), let us be clear. It's precisely the exact same shit that happened before.  And the reason it keeps happening so frequently is because the exact same people it happened to before are too damn ignorant and uneducated about economics, not to mention stupid, to learn from their past experiences.

It drives nearly every real economist in the world to pour a glass of scotch and enjoy the decline.
Posted by Captain Capitalism at 5:46 AM

Always educational and always appreciated, even if you are pretty sure you've covered it before. You can flog that carrion any time.

Since they do not teach any real economics which is that of the Austrian variety, what else can you expect but functional stupidity?

Even the Chicago School are bunch of commies. If they are truly free market, why a central bank issuing notes backed by nothing yet these same entities insist on keeping gold on hand?

The PE ratio is not 27. it's 17-20, depending on the source. The playstation analogy doesn't really work because the playstation can only lose value , whereas the underlying business behind a stock becomes more valuable. Earnings are growing at roughly the same rate stock prices are rising. You have to understand there is nothing out there that gives risk adjusted yields even close to what the SP& 500 or nasdaq has to offer. A 5 yr bonds yields 1% , or 1/13 of the yield of the S&P 500.

Cap,
I would like to add foreign investors. The U.S. has had a chronic trade deficit since 1976. Some of the money we use to buy foreign goods stays overseas some as actual physical currency as the U.S. dollar is still the reserve currency of the world. Most of it comes back to the U.S. not to buy goods or services or even direct investment but to buy financial instruments.

Grey, are you going to believe you or Dr. Robert Shiller?

Captain, You're showing the Shiller P/E 10 ratio based on average inflation-adjusted earnings from the previous 10 years.

Just a nitpick but both you and Grey are right. You're just looking at different graphs. See the link

I'm stuck investing 3% of my salary in the stock market because my state requires it of teachers.

I'm stuck having about $50k in the stock market because it's in my IRA and I would pay out the a$$ to take it out.

However, about six months ago I cashed out everything I could take without penalty, bought gold (yes, through Franklin Miles), paid off some debt, and started putting the money I had been investing each month into a savings account while I figure out what to do with it. Right now I'm thinking that the two best options are either pay down the mortgage (invest in real estate) or put it in an envelope in the safe since I assume people will still accept it barring a major collapse of the system.

PE ratio in itself cannot tell you whether a business is over or undervalued. All businesses are going to be valued at a multiple of their earnings, and what matters is if that multiple makes sense with respect to the underlying asset, not how it compares to other assets in other businesses.

If Tesla trades at some ridiculously high PE ratio, does that mean that it's "overvalued"? Who knows. Maybe Tesla has potential to go huge. But if you do know, don't hesitate to put your money where your mouth is. But if predicting whether a stock is over or undervalued relied entirely on reading their PE ratio, portfolio managers and large swathes of the finance industry would be out of a job.

Now, I'm not an EMH extremist like some people, but if you check Fama's Nobel prize lecture, you'll see in all honesty that he makes some good points about Shiller's purported prescience. E.g. :

I'm a 25 year old communication studies grad ( I know) and I am currently training in U.S. Army AIT. At present, I place 15% of my income into a TSP (military 401k) account and another 10% into my savings account. My question: if the stock market is grossly overvalued and many 401k's are essentially worthless, what can I do to better appropriate my money to secure my financial future?