What did I tell you people? 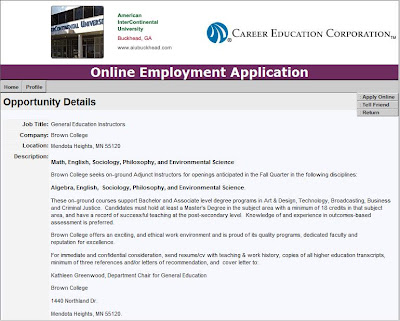 Posted by Captain Capitalism at 8:22 AM

With all due respect, Cap, what do you think Algebra is like at the post-secondary level? In my first year Algebra courses we were doing systems of linear equations, matrix algebra, vector spaces, and trig. That's non-trivial math.

I'm not sure what you're saying here. Algebra covers a lot more than the basic x + 2 = 4 solve for x stuff. I can't find any actual course descriptions on their website, but they offer courses in computer graphics which can require a lot of college level math--mostly algebra.

and people doubted you.

Algebra, with matrices, FOIL, trig, you name it, should be learned by the 9th grade.

Not taught in the 14th grade.

The Captain is right. These courses are NOT advanced math. It is basic algebra which students usually take in ninth grade.

This is a "remedial" course for people who didn't learn their Xs from their Ys in high school. Brown "College" is a proprietary school which admits people who didn't or shouldn't have graduated high school. I used to be a Dean at one of these colleges. Some of them can't grasp basic math functions. Algebra is rocket science for them.

BTW, algebra classes are begun in 1st grade or kindergarten. Remember 2 + box = 3 and you had to fill in the box? That's algebra.

If I remember correctly and it's been 40+ years, that I had Algebra I in 9th grade, Algebra II in 10th, Geometry in 11th and Trig and Analytic Geometry in 12th.

Didn't have calculus until college.

I took three semesters of Calculus in college and graduated with a Chemistry degree.

I didn't remember having matrix math anywhere in my education before, but perhaps I was brain damaged. Anyway, I had a very quick crash course in them.

So i'm a bit baffled about the Cap's comment about learning all this in 9th grade.

Was that a bit of hyperbole?

BTW, I've been in the computer sciences business now for 30 years and I've never had to use calculus (or matrices) ever.

The type of algebra they're talking about doesn't get any more advanced than pre-calculus.

Well, Brown College doesn't post their course syllabus online, so unless one of you has a copy that you're not sharing, we're all making random assumptions to suit our preconceived notions.

Brown offers a video game design program, and having worked in the field I can tell you that understanding transformation matrices and real trig - not the basic version they teach in high school - is absolutely essential for designing a game rendering engine.

Brown could also just be teaching their students how to use a DarkBasic IDE or clicky-clicky on Blender. I don't know, but the important point is neither do any of you, unless you have the course syllabus for the program.

No, Daniel, Cappie and I have both worked for this type of "college" and we know EXACTLY what type of students go their and what kind of classes they take. We're not guessing at anything. These schools are following the business plan of the University of Phoenix, a multi-billion dollar business. The Academy of Art University and Le Cordon Bleu are two very prestigious proprietary schools in San Francisco. Other chains include Corinthian, Argosy, DeVry, Everest, ITT Tech, Wyotech, Heald, Western Career College, etc.

Their degrees are not totally worthless, only mostly so. Most have no accreditation. Some have only regional. They are not bad, per se, but they are absolutely nothing like traditional college or traditional students.

They charge enormous tuition, pretty much capping out Stafford Loans, PLUS loans, grants, and whatever else a student can earn. Note on Brown College's website there is no mention of tuition costs either - only links on how to complete a FAFSA. It refers students to the Admissions Advisor which is another name for Salesman. These salesmen are slick talking chain smokers or hot women with big tits. They get paid commission for each person they drag in. They literally get convicted felons, homeless people, $5 whores and crack addicts to sign up.

The college I was a Dean at worked very hard to help kids succeed. It was partly their mission and mostly their paycheck. These schools push retention very hard. The Federal rules on attendance were strict. If you missed two weeks of classes for any reason, you were disenrolled. They also work hard at placement because defaulted student loans come back at them.

Most kids failed or quit. Some were dragged through. Others were smart and could go anywhere. Our IT Security kids were mostly very bright. Our Accounting program was also challenging, but none of them were headed for Big 6.

But when we say Algebra, we literally mean X + 30 = 67, solve for X. There are no math classes at these schools above algebra. They are for all the lost souls who were let down by poor environments, apathetic or destructive parents, horrid public education systems, and their own lack of intelligence and motivation.

They get an Associate of Applied Science (AAS) or, at best, an AA. There are a few of these schools that grant a BA, but few if any are accredited.

At graduation, these kids and their families go nuts because they are usually the first college graduates in their families. It's a small step forward, but highly significant for them. Most of them get low paying jobs and struggle to repay $50K in student loan debt. A few go on to a real college, but most of the credits don't transfer which tells you how lowly they are regarded.

This is Brown College, not Brown University.