The Real Reason for the "Fast and the Furious" Franchise's Success

Just one thing people miss about why the Fast and the Furious franchise was so successful. 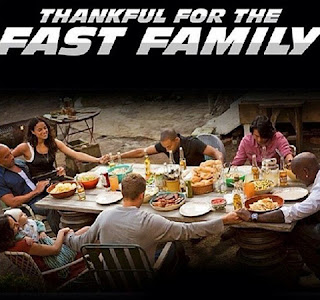 I'm going to go out on a limb here and draw a couple lines.

The youth that are attracted to the FATF series are also of a generation now brought up by my completely worthless and dysfunctional generation, or the equally dysfunctional baby boomer generation who had children later in life.  Whether late boomer or early x'er, they have something in common:

Don't know if you've seen any of the FATF movies, but there aren't any parents.  There are no parental figures.  Matter of fact, every movie is a story of young adults having to make their way in life, and the only way they know how is through the underground or by illegal means.

Is there even a "wise uncle" that could pass as a father figure?

It is 100% parentless youth that can only find refuge, surrogate family, and meaning in other equally abandoned metaphorical orphans.

Are the movies horrible?

Will their car chases ever match "Bullitt?"

These kids wanted a fucking family.  And if they can't get it in the real world, they'll live vicariously through the movies dreaming they might have the shot at putting together a surrogate one with a ragtag band of rejects and miscreants.  They might have meaning, they might have belonging, and they might serve a purpose, even if it is illegal.

Of course, the series and acting is absolutely horrible for TFATF (no disrespect to Paul).  But what is worse is what's driving kids to see such an otherwise horrible and pointless movie series.
Posted by Captain Capitalism at 7:30 AM

This analysis perfectly applies to Firefly as well.

...also the appeal of shows like Firefly, Angel, Buffy, Star Trek, and really any show that attains a cult following - they are all about people coming together and forming a family. What do Browncoats love about Firefly? When they all eat together at the dinner table.

I never really thought about this in this context. Excellent point/post.

This also applies to the Gang component as well. I've hears gang members constantly refer to themselves as a family.

I don't know about FATF films being terrible, but the point is good.


That just proves what I've thought for quite a while....the strongest instinct in humans is to "belong to something". Whether its a gang or a cult; the "belonging" will override any moral or common sense.

How about ICP. Those retards openly call themselves "The family"

Sorry, Anonymous, but Shepherd Book in Firefly is definitely a father-figure.