Obama by the Numbers - Debt and Deficit

Continuing on with our empirical series of measuring the performance of the presidents' economic performances, we look today at debt and deficit.

And this is such a slam dunk I don't really think we need to delve too much into the details.

Without a doubt, Obama is the biggest spend-a-holic making Reagan's deficit spending in the 80's (which the left at the time screamed bloody murder) look like austerity v. 2.0. 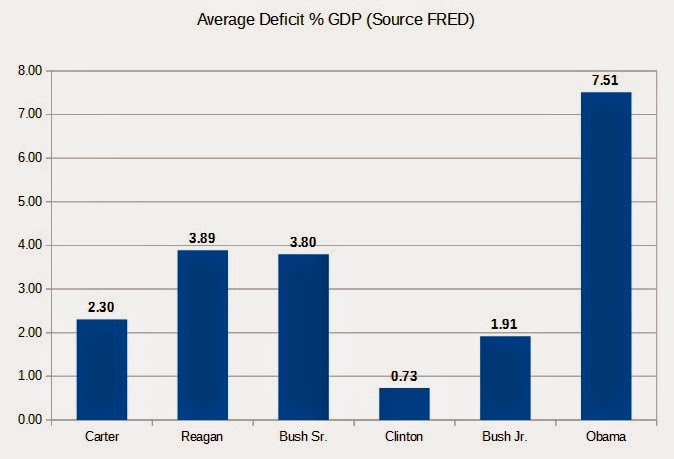 The natural economic criticism would be that with the world's largest Keynesian stimulus, why the poor economic performance that is on par with GW's?  It's like taking five Viagra pills and only lasting 3 minutes.  Of course, cynical economists such as myself know when you piss away the stimulus on the dregs of society for Obama Phones, make-work government social programs, unneeded community centers, global warming research, and single-mom mania, it shouldn't be a surprise the money wasn't invested in capital goods, manufacturing, or any real investment, resulting in zero future economic growth.

Naturally, when you piss away deficit money, you do two things.  One, increase the amount of debt, and two, you do NOT grow GDP.  This then results in an increasing amount of debt relative to the actual economic production being produced: 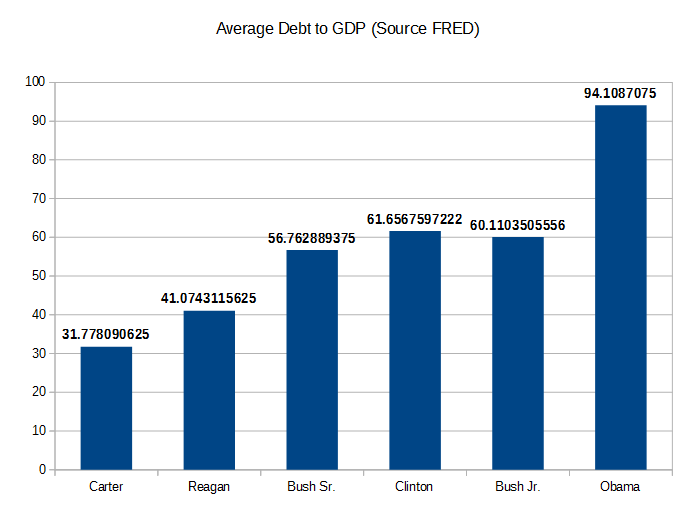 Of all the statistics we could look at the presidents, it is this one, debt and deficit, that not only defines the Obama presidency, but one of the few ones I would claim is completely owned and the fault of the president.  Conservatives at least berated Bush for his (then) egregious spending, but the left is completely silent at the crippling deficit spending of Obama, because like him, they are ideologues and in general hate this country.  Any spending that goes to them and their causes AND harms the country's finances at the same time is a two-fer in his and their eyes.  Call me cynical, but I'd glad change my tune if I saw proof of the left actually loving this country, rather than hating it and trying to destroy its culture and traditions.
Posted by Captain Capitalism at 12:48 PM

He had no idea about what happened under previous administrations.

On the other hand... did you see what happened with whatever that thing was that happened in that other state to distract you?

It should be even higher, considering the economy since 2009 is a phony economy based on stimulus and beancounting voodoo.