I then posed the challenge to create the argument why government spending in its entirety (most of which really is theft) should be DEDUCTED from total GDP.  Keynesians have logically and traditionally argued that government expenditures on goods and services should be considered part of GDP in that they DO indeed result in additional goods and services being created.  However, us slightly higher-caliber of economists know that there is something fishy about just "assuming" government spending translates into higher economic output and thus higher standards of living.  So allow me to explain.

First, there is the broken window fallacy that many of you are familiar with.  Missiles and bombs built here in America only to be exploded on the Iraqi population does NOT indeed improve standards of living here.  Over-paid government contracts handed out to connected cronies in Washington DC to do make work job to "improve diversity" or "study connectedness" does NOT improve standards of living.  Ergo, you can assume the "G" in the C+I+G+(E-I) formula in GDP is most likely completely overstated.

Second, how does one account for the theft euphemistically called "income transfers?"  The Keynesians rightly point out that income transfers do NOT result in additional GDP.  Parasites (and that's what they are) receive money in exchange for NO labor, NO production, and NO economic product.  Ergo, no increase to GDP.  However, while Keynesians would argue that there is no increase in GDP and "that's it," I would argue that the money blown on "income transfers" is a lost potential of economic productivity.

In a free market where there would be no parasites, that money would "command" genuine economic production from somebody.  Ergo, the $3 trillion we piss away annually (never mind local and state budgets) on theft/income transfers COULD HAVE GONE TO PURCHASE/DEMAND GENUINE ECONOMIC PRODUCTION.

When we do this, the results are interesting.

It takes a keen eye, but what we suspected all along was true.  During the depths of the recession TRUE economic growth was much worse than what the obfuscation of government spending attempted to convince of other wise. 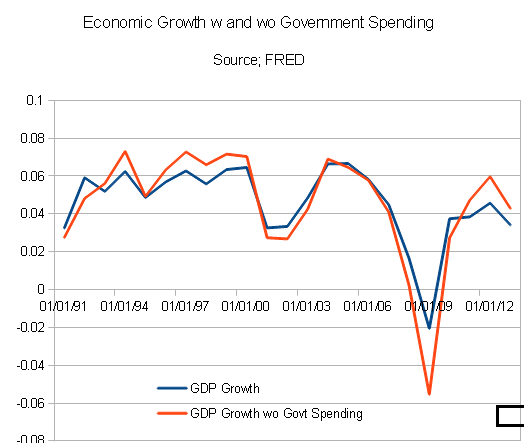 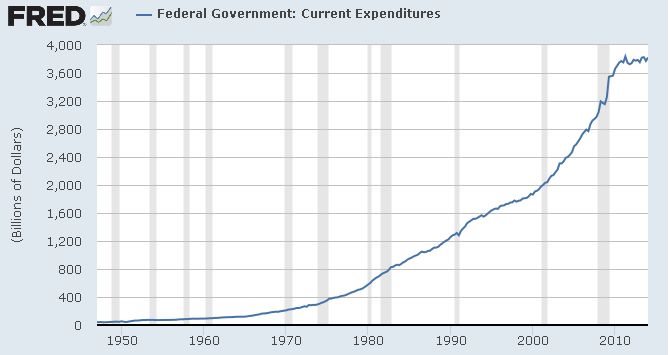 What this shows is an important lesson for any real economist or person who desires to be intellectually honest.  It doesn't matter what president is in office and what his political affiliation is.  It only matters what POLICIES are effected by the entire government.

If you look at the chart you'll see that the ONLY president to reside over any modicum of fiscal discipline was President Clinton.  There (again, partially enforced by a Republican congress) the OVERALL government restrained spending and enjoyed an economic Dotcom boom.  This resulted in a non-government economy growing at a rate much faster than government spending AND a drastic reduction in our nation's debt.  But since Bush Jr, and most certainly Obama, you see economic growth below governement spending and the resultant crushing national debt.

The recent restrain of government spending is a good thing and a sign of genuine hope that has never really existed in the Obama presidency. I would like to say that if current trends continue private sector economic growth will outpace government spending and the US would inevitably pay off its debts, outgrow the national debt, and we'd be on our way to a glorious future.

Sadly a visit to your:

will tell you this is merely a fleeting economic condition and our general plunge into 3rd World-ism will continue.

Enjoy the decline!
Posted by Captain Capitalism at 8:51 AM

Once when the income is stolen, and a second time when that money drives prices up for purchases.

Money that did not benefit the earners is competing for the same goods.

Twice? More like the infinite addition of twice... four, six, eight... At least one addition or multiplication per generation.

From the income stolen side:

Less incentive to work on the first generation of victims.

Even less incentive to work on the second generation, and so on.

Once the inheritance tax is exercised, incentive to work and have it even more stolen, even more lessened.

When the producing have to listen to the inheritance tax discussions as now is happening in Finland, more distrust to the system, more loss of incentive.

On the side benefitting the transfer:

Less incentive to produce, on the first generation.

the first generation has more time, and is getting paid extra for babies, so more babies.

And then the entitlement feeling kicks in.

It's a geometrically growing problem, and I think we are at the point where the hockey stick corner has been reached.

A leftist couple, calling me crazy for saying that socialism cannot work until all women are of the same beauty and same good character as men will want to be with the better women, and this competition will always lead to inequality.

When their kids were in preschool, they had to pay for the school, on top of paying 40-50% progressive taxes, and they were financially strained, even if they were high earners.

Listening to them complain that a stay at home dad, stay at home mom, were getting the kid's play school payed by the government on top of rent help, welfare, children aid welfare was a thing to enjoy the decline!

another friend who one day was angy at me calling out the foreigners not doing anything but playing football and popping out kids, complaining that a man in his family, popped four kids and has more disposable income than him, who has three and is also a high earner,

Things to notice, and Enjoy the decline!

Sorry, I meant to say "at least twice".

There is a chance the money will be spent on a service instead of a good. At which point it only adds to inflation.

But yea, the misery is usually recursive.

I'm totally confused. If government spending has stagnated under Obama, where does the 17+ trillion dollar debt come from?

Robert,
Well, that's easy. Government spending 'may' have 'stagnated', but the tax receipts have fallen (due to people not having a job, and not spending money)

So government borrowing (to cover the gap) has increased. That, plus the 'bailouts', plus the aggregate US debt from things like Reagonomics, and WWII, and any other damn thing where the bill hasn't yet been settled. These things all add up.

And because it's easier to exchange one debt instrument for another, rather than exchanging it for 'money', the aggregate debt can grow to staggering heights.

I especially agree with the insight, "It only matters what POLICIES are effected by the entire government."

The purpose of the government is to spend money (by carrying out policies). We should be analyzing governments by how efficiently they do that.

But voters do not do that. They listen only to what politicians SAY rather than what they DO.

The average voter is not able to make distinctions based on the effectiveness of government.

I have found that the average person understands very little about how government actually spends money. And how effective it is at carrying out its policies.

It can be that the 'rate of increase' of spending can level off. But as long as you are spending more than you are taking in, (i.e. running a deficit) the debt will increase.

One other thing, as your debt increases, a larger and larger percentage of your income will be consumed in paying off interest.

@Dutch Masters and @Anonymous - thanks for the replies. Does that mean that the bailouts were not considered part of "government spending"? If not, what are they debited to?