In the past three years I've had the fortunate luck to be able to travel.  Admittedly within the US and on a shoe-string budget, but still, travel none-the-less.

As you travel you start to notice some common recurring themes or "traits" during your travels.

Like how you constantly end up with a Kia Rio rental because you're cheap.

Or how you strategically plan your travels around Wal-Mart because your plans change and you need new gear to meet your changing plans.

However, out of all of these "eccentricities" of American Bachelor Travel (TM) there is one that keeps popping up in my travels that I've decided to document henceforth.

The Hotel Desk Picture is a recurring visual I see every time I travel.  It is an empirical testament to what happen during the trip which tells a story unique to that particular travel.  It first started when I was in Grand Junction, Colorado about a month ago.  There, without me knowing it, was the perfect set up for the "Hotel Desk Picture."  I had driven from Minneapolis to the western reaches of Colorado.  I was at a shady hotel, but the ideal hotel.  This resulted in me putting my loaded pistol on the bedside table, but not without me first putting my laptop on the lonely beige desk in front of the window.  The combination made me feel like Hunter Thompson wherein I could write all I wanted on my laptop (whilst looking into the multi-colored cliffs of the Rocky foothills), and reach for my gun in the statistically improbable case a leftist sent a hitman after me in these western remote regions a la "No Country for Old Men."

I didn't write anything like Mr. Thompson, and no leftist goon made an attempt on my life.  But after that I have henceforth decided to take a photograph of the desk or bedside table during my travels to document what I (personally) think is a pretty cool phenomenon.

.For example, this is my latest "Hotel Desk Picture" 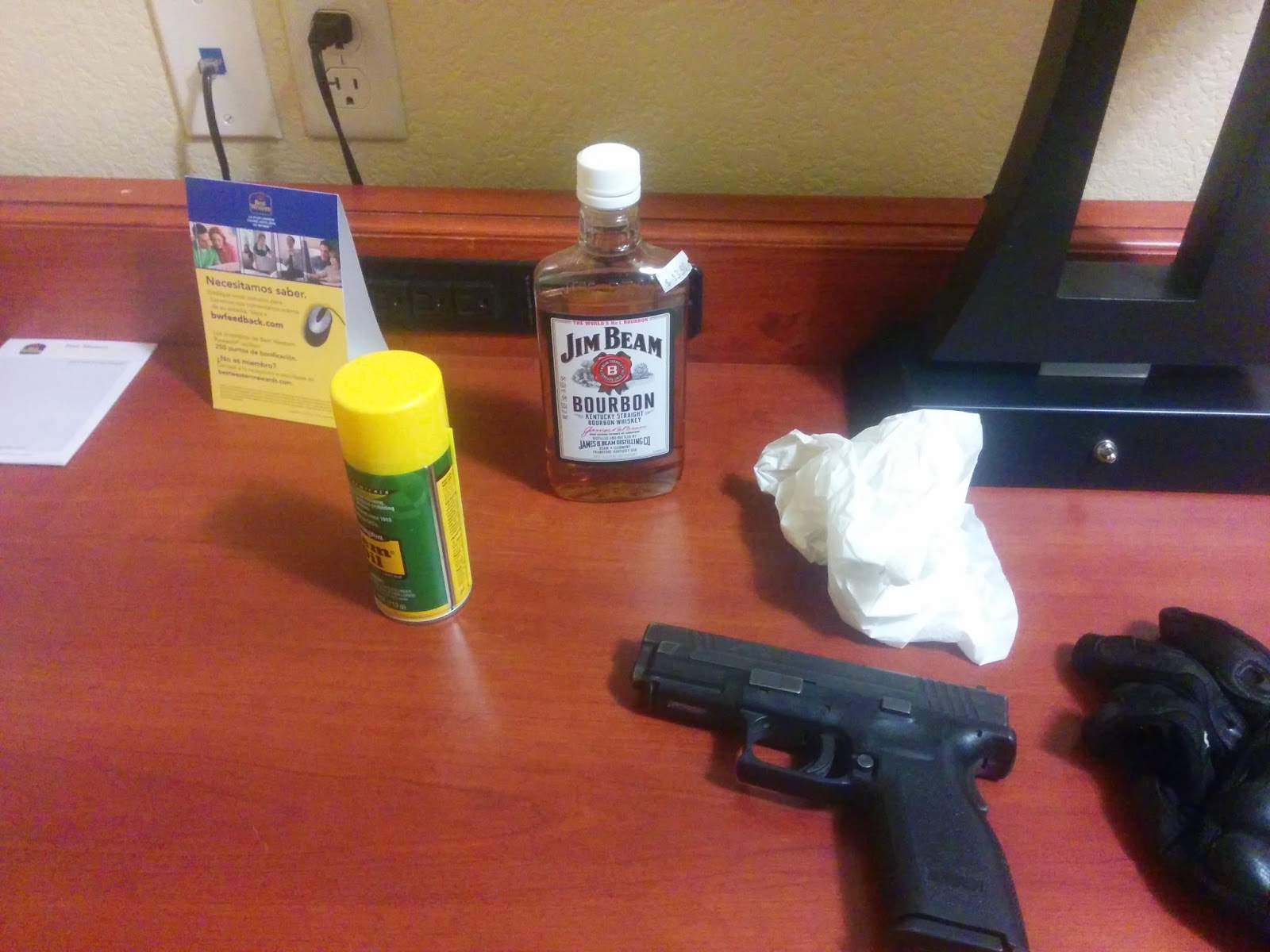 The picture tells a thousand words, but let me cut them down a bit.

1.  The Jim Beam is there because I had driven a motorcycle through weather conditions that consisted of consistent Seattle-like rain, sheer winds of over 40 MPH (to the point I'd have to draft off of semi-trucks), and 30-degrees-below-average temperatures of 55 degrees.  I wasn't drinking, until god decided to be a total dick and screw me over on my ride to the Bakken.  Thankfully the Devil made Jim Beam and my nerves were calmed upon reaching my hotel.

2.  Speaking of weather, did I mention it rained like Seattle?  Not hard, not soft, but a constant piss of rain that made you think god had drank gallons of water, put a sprinkler spout on his unit and said, "Hey!   Let me piss consistently all over I-94 in North Dakota for 6 hours straight!"  So consistent was the rain that it soaked through my jacket, the liner, and the pocket that my 9MM got wet.  So I had to clean it.  Which leads us to...

3.  "Remington's Cleaner."  That yellow and green can?  Yep, that's gun cleaner freshly bought from the Dickinson Wal-Mart.  And let me tell you what a fine and upstanding clientele that Dickinson Wal-Mart has.

If you ever think it's just minorities outbreeding their capacity to pay for said parasites children, in addition to Casper Wyoming's two Wal-Marts, now add Dickinson for pure, 100%, USDA Grade A white trash sucking off the government dime.  Idiocracy was not a work of fiction, it was a documentary about Dickinson's Wal-Mart.

Anyway, I had to get gun cleaner to clean my gun.  Disassembled it, sprayed it, cleaned it, scrubbed it, and reassembled it to its current state in that picture.

4.  The gloves?  Those are just drying there on the table.  Behind the scene my clothes were all scattered about to maximize the surface exposure to air so they'd dry and I'd have dry undies the next day.  Truthfully the gloves are the first to dry because they're immediately exposed to windsheer while driving.  But still, the larger point is all of my clothes were soaked.  I was standing in nothing but a towel when taking the picture.

The moral of this post is that you should take the time to look at your surroundings while you're on an adventure as it will tell a more telling story than perhaps the adventure itself.  I have my pictures from Grand Junction somewhere, but until that time, I suggest the next time you're out traveling,

stop
take the time to pull out the camera

and take a picture of what is sitting on your hotel desk.

It may prove a better story than the trip itself.
Posted by Captain Capitalism at 11:40 PM

Aside from Idiocracy, let me suggest Dumbth. Yes, it was written by a lefty guy who was too smart to see basic truths sometimes, but man, what a breakdown of the mental breakdown of America.

Surely you have two pistols, one for use while you are cleaning the other?

I'm not surprised in the least of Wal Mart's clientele. It is always the same, no matter where you go.

In fact, one of their higher-ups admitted that most of their business comes from the welfare/ebt/"monthly tugboat" crew...

Couple pointers Cap.
For travel in inclement weather by motorcycle I recommend a bigger bottle of booze - and smaller bottles of solvent and gun oil. Takes up less space in the luggage.
Ride safe and take more pics.

After seeing your photo I'm curious. Is a specific permit required to carry a pistol across a state line?

Great post Aaron. Best Western is a nice splurge for a budget traveler. The BW in Tusayan AZ (Grand Canyon) is actually quite luxurious. Almost.

"If you ever think it's just minorities outbreeding their capacity to pay for said parasites children, in addition to Casper Wyoming's two Wal-Marts, now add Dickinson for pure, 100%, USDA Grade A white trash sucking off the government dime"


You haven't travelled extensively enuf through the West, esp the p.n.w.


I will match you trashed mountain properties and a dozen stripped-out backyard wrecks, for ANY American ghetto.

They all have seventy or eighty relatives living nearby. Dunno why....

ps how about a good camp-stove instead of artificial food? grab the ingredients on the way thru town.

At first, I thought the spray can was for jock itch, which if true, would told a very different story.

You really need some good rain gear. An Aerostich suit should be on your future acquisition list.

I have ridden days in the rain without a drop getting by.

I'm waiting for the "Hotel Carpark Picture", in which we see your bike's improvised engine heater plugged into the hotel's outdoor mains electric sockets.

This, of course, is a feature provided by the hotel in regions Due North where Nanook himself does not frequently travel by bike past early September without proper snow traction gear.

I was using some chick's make-up table for my writing desk at the last place. This did not merit souvenir photos.

You, Dear Gentleman, are living posh. :-)

Also, your captcha is cursing at me in Welsh, and I kindly ask for such madness to stop.

I counter-suggest a small flotilla of alcoholic "miniatures" -- you never know when you'll need to use them as chess pieces Graham Greene-style.

You can also use them as barter with the "welfare/ebt/'monthly tugboat' crew" as UCSPanther has called them ... :-)

AW HELL YEAH NOW I CAN GET JUST A LITTLE DRUNK

So I haven't been able to visit Canada or drive to Alaska because of the stupid gun laws. Any suggestions? Bury them at the border? I'd like to carry a handgun in Alaska as well...