It’s Not that Complicated People

If you put weight on the end of a see-saw, the other end will go up.

If you let go of a rock atop a cliff, it will fall.

And if you light a match and put it to gasoline, it will ignite.

These common sense things are common sense because they are dictated by physics. Laws that we and everything in the universe must abide by.

And while the study of economics can claim no such simplicity, every once in a while a theory is so proven and so commonsensical that it is for all practical purposes a law and can be treated as such.

What is funny though, is how humans, particularly those of lefter leaning ideologies, refuse to believe these laws and try to some how circumvent them. As if through creative fiscal policy and government programs they can create the scenario of having their economic cake and eating it too. It is quite literally no different than jumping off a cliff and thinking gravity will not apply to you.

But the particular law of economics I have in mind today is one my father would say;

Or in other words;

“If people don’t work, then there is no production and therefore no wealth.”

You’d think we’d have learned this very important lesson by watching the Soviet Union, Chairman Mao and varied other sorts of communists kill 100 million people and impoverish a billion more. But, ahhh, you so underestimate the ignorance and outright stupidity of the left. For one just has to look at the backlash Gerhard Schroeder suffered from his Hartx IV reforms and to a larger extent the slothful work ethic of Europe in general.

Recently unemployment in Germany reached a post WWII high at 12.6%. Certainly the worst of the European Brady Bunch, but not by much. France and Italy among others are pushing for double digit unemployment as well. 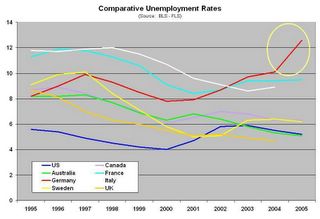 And while the above chart, with its many lines, may be a bit confusing, perhaps this chart from The Economist will make my point a bit clearer.

Again, remember folks, according to the left, our economy was “the worst economy in 50 years” when unemployment was at 6.3%. Yet at the same time they so desperately wish to emulate our European counterparts. Hypocrisy abound.

But what of the second part of the law; there is no wealth. Certainly unemployment itself is bad, but the European model cushions such unemployment and maintains similar standards of living, do they not? Well that could be said for the 16 million Swedes and Norwegians, as for the remaining 500 million Europeans, sadly this is not true. On the average, Europeans have suffered lower standards of living than Americans ever since GDP per capita has been recorded for all said countries. Furthermore, despite having access to the same technology and the $350 billion (translate that into roughly $2 trillion in today’s money) from the Marshall Plan, Europeans, unlike their Japanese counterparts, have failed to catch up. Worse still is the fact that while standards of living have improved, the gap between America and Europe has widened from roughly $5,000 to $8,000. 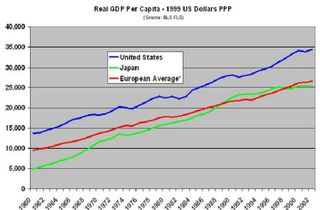 But then again, don’t listen to me. I’m just some dumb economist who when he’s not staving off the romantic advances of scores of women, he’s just jumping out of trees, running into the bushes and climbing rocks. But you’re going to have a hard time to convince me otherwise that if you pay people not to work (GASP!)

THEY WON’T!
Posted by Captain Capitalism at 9:05 AM No comments: 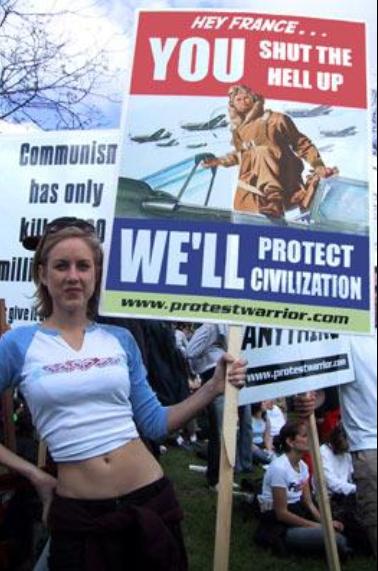 Posted by Captain Capitalism at 9:42 AM 2 comments:

Advice to Rush and Others from the Rookie Radio Show Host

Yesterday I was a guest host on a local radio talk show. In preparation for my two hours of fame I had spent the better part of the week preparing topics, questions and what I was going to say about them. However, unlike my veteran talk radio counterparts, I absolutely refused to talk about Terrie Shiavo.

And I still refuse to talk about her.

However, the same cannot be said for the entire talk radio industry, for today I had to endure from 9AM to 6PM non-stop, incessant jabbering about Terrie Shiavo.

Was she being fed?

Was she still alive?

What did the husband do?

Did it go to the courts?

Did it go to congress?

Is she really a vegetable?

Here's the only question I have;

My God, man! Get the hell off the case already!

An entire day of stay-at-home religious right female maniacs who only derive value for their pathetic lives by engaging in these stupid crusades calling into talk radio! Minute by minute updates on whether she was drooling or not. And pointless, mind-numbing speculation about the motives and incentives of all the people involved. It's so bad I've started listening to Air America just because they're covering something different!

The sad thing is that I fundamentally acknowledge this is an important issue to resolve, but the overkill coverage of it has been so drowning that I'm so put off by it that I'm actually cheering for her to have a quick death, regardless of what moral ramifications that has for me, just so we can get back to having decent talk radio!

Perhaps it is on an economic perspective that it doesn't make sense. The amount of time, energy, effort, money, resources, media coverage, protests, etc., etc., that has been expended on this one person is more than what most people will accomplish in their lifetimes. In otherwords if you were to add up all the time people are spending on this, it amounts to the equivalent of a lifetime. If you were to add up all the money and resources spent on this one person, it adds up to more GDP and income that one person could every make. And if you add up all the resources spent on this, it would add up to more resources than she'd ever consume.

So my advice to all the talk show hosts out there,

GET THE HELL OFF THIS DUMBASS TOPIC AND MOVE ON TO BETTER THINGS!

Your entire listening audience consists of people other than those who read the Enquirer and watch day time soap operas.
Posted by Captain Capitalism at 3:32 PM 3 comments:

But is She a Capitalist?

She certainly is a babe...although a little fatter and fuzzier than I like them, but is she a capitalist? 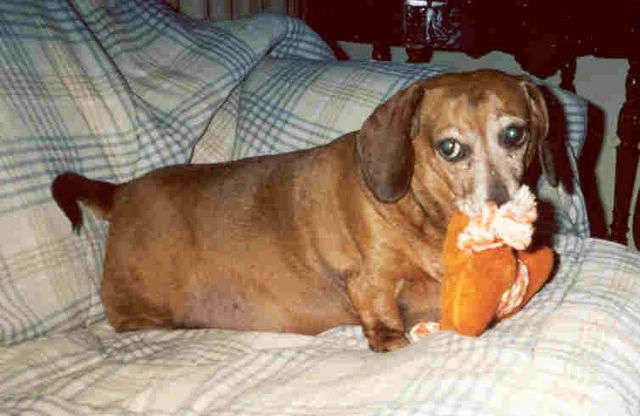 Well I am reliably informed by her owners that "Louise" the fat dachshund from Wisconsin is indeed a capitalist canine...which makes her smarter than most human democrats.

Though not human, I will make this exception and allow Louise the Fat Dachshund from Wisconsin to enter the 2005 Babes of Capitalism Calendar Competition.
Posted by Captain Capitalism at 12:03 PM 1 comment:

Reminisce back to your middle school days and if you were paying attention in Civics or Government you would have remembered the cool term "Gerrymandering." And because it was such an odd term you probably exactly remember its definition, so I shall spare you an explanation. I knew stuff like gerrymandering happened, but in a recent article in The Economist, I happened upon this chart. And like many charts from The Economist, I just had to share it with you all. 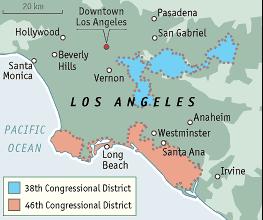 Posted by Captain Capitalism at 8:25 AM No comments:

Of Black Helicopters and Big Oil

Whilst teaching economics at the local community college where they accepted nothing but the best the public schools had to offer, prices for a gallon of gas were persistently over $2 a gallon.

My students, the savvy geopoliticians they were, were all lit up about the high gas prices and were even more ecstatic about a boycott that was coming up that was "going to stick it to big oil."

"Huh," I said to myself, "that's interesting. I'd like to see how they boycott oil."

Upon further investigation I heard that there was this movement all across America for everybody to boycott oil on the same day and that would show those corporate executives at Exxon Mobil!

If you cannot see the weakness and stupidity in this boycott, you are at a loss, for I am too busy to berate you right now.

Anyway, I said, "Well, there are several reasons for the high prices of oil, but big oil is not one of them." I then went on to discuss how what was considered "big oil" were really more transporters and refiners and had to buy the crude oil on the market from primarily OPEC, and that they really didn't control the price of oil as much as forces of supply and demand.

Of course, this is not as romantic or exciting as being oppressed by big oil, so they did what any brainwashed students would do and believe what they wanted.

So, it was a pleasure when I saw the following chart. 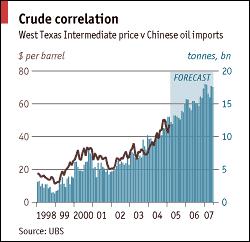 In addition to OPEC tinkering with supply, on the other side of the equation is China's voracious demand for oil. I knew this, in combination with other things, was one of the contributing reasons for the increasing price of oil, but I didn't know just how much.

Unfortunately, if forecasts of Chinese economic growth prove correct, and the correlation holds, they aren't just joking or trying to make headlines with the $70 barrel of oil. 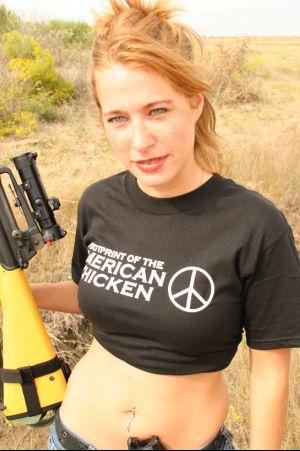 A girl with a rifle and if I'm not mistaken a pistol tucked into her pants. Something tells me she isn't a counselor at a public school.
Posted by Captain Capitalism at 10:32 AM 3 comments: