There are many "deal breakers" for the Captain when it comes to dating.

Like being married and not telling me. That's kind of a deal breaker.

Or playing all those "Middle School Girl Reindeer Games." That's kind of a deal breaker.

Or having children and then expecting me to bring up some other guy's kid or kids. That's definitely a deal breaker.

But probably the quickest way to get dumped by the Captain is to utter the words "big oil" and in the context that you somehow think they are to blame for high oil prices.

Thus why I like the charts below. For while oil has gone up in price, other commodities have gone up MORE in price. If one is to be intellectually honest and they hate "big oil" then they too must hate "big tungsten" or "big timber" or "big aluminum." Of course, they don't hate those commodities because those commodities are presumably "good" commodities whereas oil is obviously an "evil" commodity.

Well look out oil. There's a new BAD commodity on the block; 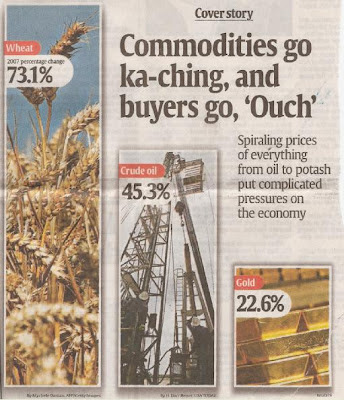 (Well, I'm sure there's a few farmers out there that aren't hillbillies. Only a few...)

Wow. The government should immediately put billions of tax money into research for finding a substitute to wheat!

I tend to agree with the ladies on this one (and not just to get them in sack).

The markup on oil and raw gold is not significant, so a change in bulk market prices greatly influences retail prices. On the other hand, no one notices small increases in beef and cereal prices. These are small because so much of the cost comes from publicity, processing, inventory, distribution and (especially) retail sales cost. Thus the importance of wheat production, as a percentage of GDP, is much lower than oil in America.

That said, I am also very much turned off by unjustified criticism of capitalism at work, might it be in the wheat or oil market. When such a comment is made, I ask my lady why she is not writing to her MP (the equivalent of a representative in Canada) against "big water"; how can Coca-Cola charge 2$ for a bottle of tap water?

Big Wheat is a good thing. Markets come and go and that is the fun in it all! Capitalism is Freedom. We have just finished how many years of "the sky is falling" media and DNC political campaign trying to defeat us from within. We are bound to have some bumps and bruising. I for one, love taking advantage of the sloth that listens to the rhetoric and sells at a reduced price. That is good business and opportunity knocking.

I like your blog. A friend suggested you. Check us out at the Grizzly Groundswell dot com. You may find you found a movement you can invest yourself and blog into!

Yes, of course, that is the logical conclusion ;)

You're asking for punishment

You're a racist no matter what. You live in a successful former British colony and are white. Ergo you must be racist ;)

Has anyone noticed the rates for evil water lately? Up 100% from last year here.

The lefties are way ahead of all of you on the evilness of "big water". Earlier this year, signs started appearing around my university's campus warning of the evils of "killer coke" and how "dasani is da phony!".

See here if you want more details (and are capable of reading soviet-socialist-esque propaganda without vomiting).

People are more upset by gas price changes simply because they are more aware of them. If there were billboards updated daily with the price of milk on them everywhere you went you'd have the same reaction.