Canada About to Become More Capitalist Than the United States

I have had the honor of being invited to blog on Small Dead Animals, the premier Canadian web site for independent thought, conservative, free-market thinking, liberty and other sins. Thusly, since it is a Canadian web site, I decided I should make a post about Canada and thought as a kind of token "economics lesson of the day" I would describe the concept of "government spending as a percent of GDP."

The reason I like this measure is that it is "the" measure to gauge how "capitalistic" or "communistic" your economy is. If you take the government budget and divided it by GDP this shows you, more or less, what percent of the economy the government is taking. Now, a lot of people will point out that it should be government revenues, not expenditures that should be divided by GDP to see how much a country is "taxed." The problem is ultimately, whether it is debt spending today or actually taxes collected, taxes is what will inevitably pay for that spending. Thus I prefer to measure what the government spends, not what it takes in.

But imagine my surprise when I, Captain Capitalism, presumed knower-of-all-things-economic, pulled the figures for Canada and realized Canadians have the same tax level as the US. 37%. 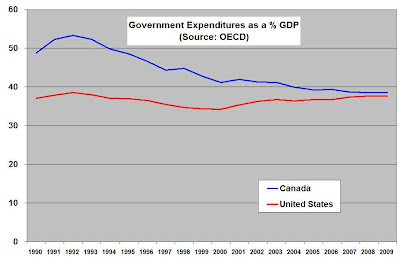 Canadian have always paid at least 20% more for everything than US citizens pays. We have often had a much lower dollar to add to the misery.

Now that our currency is pretty much par, we are still paying about 20% more for everything. Then add the layers of consumption taxes on top and you have a 20% lower standard of living in Canada.

We are far from being more Capitalistic than our neighbors. If it wasn't for you being right there, may have dispensed with the Capitalist system a long time ago.

But this does not include revenue. That's my point. This is expenditures and if I read the OECD sub notes, it includes all public forms of spending, estimates of course, but it is the most preceise measure. Canada is about to become more capitalist.

Well if its true Captain, Hurrah!! America has been a good influence on us! I'm like John, though, I'm a little skeptical. Does this include all levels of government taxation? Federal, Provincial and Municipal? If its really true that America is about to be taxed more than Canada (and I think if Obama is elected its safe to assume American income taxes will rise), than both our countries are really going to have to depend on Walmart and other large American retailers to keep prices down, inflation low (or at least lower) to keep our standards of living stable!!

Are these figures from the OECD? Most statistics that I have seen in the last couple years showed the US at about 32%, not 38%.

That would give the US some more time before the Canucks overtake them, though it wouldn't change the trend. Just think of the Social Security predictions that you posted here some weeks ago.

There's some tough time ahead for all capitalism-loving guys and gals in the US, especially if the Bush tax cuts are not continued after 2010.

I'd say they're getting more bang for their comparable buck. Spending less on military and more on preventative universal health care seems more responsible to me.

PFFFFFT. Don't worry the mantle of socialism/communism lives strong and free in the Great White North. We have been taken over by the left for many years now and it has destroyed a once great country. The population is made up of corwardly, petulant, pious, whinning, selfish, teenagers of all ages.
37% is only the tip of the iceberg. Everything here is 25% or more in price despite dollar parity plus all of the hidden taxes and PST/GST which ranges from 7-20% on all goods and services. That's all good s and services!!!!
On top of that we have taken Chairman Mao, as our first round draft choice for next year so I am sure we wll be right back on top soon.
The lefties are in full revolt here and are up in arms convincing the sheeple that taxes are too low and we need more government interfernce and spending in the frozen cradle to grave.
Raise the Standard and give full throat to the Candian left battle cry "Why in a country as rich as ours can we allow(insert pet project) to go unfunded? Think of the children. We don't want to end up like the evil Americans were you loose your house if you get sick. TAAAAAXXXXX"
Oh how I miss my North Carolina adopted home.

I think the basic point here is that Canada is not currently running a deficit.

Also, is this Federal spending only? It would be interesting to see how the differences in state and provincial spending stack up.

I have to be skeptical about Candian capitalism when they have the Canadian Human Rights Commission, the Orwellian-named organization whose purpose is to run roughshod over human rights.

Maybe I'm being ignorant but are we sure that graph isn't reflecting a lower percentage of expenditures to GDP simply because their GDP is going down while spending is static?

Funny how both countries expenditures fell right after the end of the Cold War.

Defence spending takes up a much smaller share of GDP in Canada than in the States: we Canadians have for many years left it to you to protect us. Believe it or not, we also spend less on health care than you do -- not just overall, as is well known, but even just taking the public component. That's right: capitalist, 42-million-uninsured America spends a larger proportion of its GDP on public health care than socialist, universal-health-care Canada.

Does it have any figures for domestic vs. military spending or foreign aid? My guess is that domestic spending is more of the measurement to look at rather than total spending.

When we are more capitalist, Alaska will join us. Then, we will drill, baby, drill!!

As Mr. West's comment shows, all the backslapping and self-congratulation that we Canadians like to heap on ourselves for achieving better scores on standardized tests for arithmetic and reading than our US friends is, at best, undeserved. Literacy and numeracy skills are sadly lacking, even amongst those who visit Small Dead Animals.

The biggest advantages Canada has right now are 1) we have a budget surplus and are actually paying down federal debt, so our interest burden isn't climbing day by day, and 2) our current tax structure does take into some account medical and pension spending, so we don't have the huge unfunded liabilities the US has for Medicare, Social Security, etc.

And, of course, like every other free-loading nation in the "civilized" West, we ride on American coat-tails on defence. Although like many, I wish 41 had finished the job in 91 instead of making us wait a decade, I still cringe at the thought that America shoulders so much of the financial burden of trying to establish the basic human rights that all the liberals in Canada and Europe whine are so important, but then shy away from when it comes to actually doing something about it.

Take the foreign expenditures on war out of US government spending (not domestic defence spending; just the cost of keeping GIs in Iraq and Afghanistan), and your graph would favour America again.

Captain:
Does your graph show federal spending or spending at all levels of government? In the early 90's Canada underwent a a big shift in spending from the feds to the provinces.

It includes both Federal and provincial. The US tax rate (federal only) is only 21% so I know it includes the states.

Whether it includes smallish, municipal taxes is another thing, but this includes the feds and the provinces.

For all you doubting Canadians out there, the analysis is correct. It helps that Canada is running a budget surplus. I'm not sure why, in a political sense, it can do so, while the US, apparently, cannot. Maybe a minority Conservative government actually does something useful for a country, as opposed to a corrupt Congress.

To anyone thinking Canada's healthcare system is cheaper, or "preventive", look up the Fraser Institute's study on wait times.

The reason our healthcare system spends less is that it rations services like mad. Need an MRI for a bad knee or a herniated disc? Expect about a six month wait to see an orthopedic surgeon, followed by at least a year for the MRI, and then wait again for a follow-up with the surgeon again.

Rudy Guliani was spot on when he suggested that nationalizing healthcare in the US would be bad because "...where would Canadians go fro healthcare?" I personally know and have referred people across the border for services that they would be unable to access in a timely fashion here.

and its a pretty fair bet we will since part of our expenditure is actually going to pay down the debt.

Just sit back and realize that Prime Minister Harper has a economics degree and believes the ideal maximum size of government is much smaller than what we've got.

And while we've inked a free trade agreement with Columbia, the American congress is standing back.

And that Alberta actually cut spending at one point and the opposition parties chide the government for not saving up enough for future downturns.

Aside from the communion rite of Public Health Care, Canada is probably among the most economically sensible countries in the world.