McCain vs. Obama at Hot or Not

So what started as an innocent venture of curiosity ended up becoming a bit more involved than I thought it would.

Very simply, all I wanted to do was to see who was hotter during his prime;

I deemed this somewhat newsworthy as pretty much every Jeff Foxworthy fan is salivating over Sarah Palin and every perpetually-single New York 30 something female is doing the same over Obama. And while looks are complete irrelevant in a presidential race (or at least should be), I recall seeing some pictures of John McCain in his youth and he was nothing short of Cary-Grantish level handsome.

To prove who was the better looking I took two pictures; one of John McCain in his prime and one of Barack Obama in his prime. I faced the problem that if the pictures were too easily identifiable then the screeners at Hot or Not would reject them. Fortunately both made it through and here are the results; 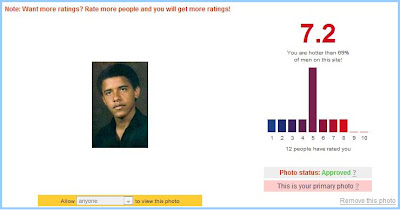 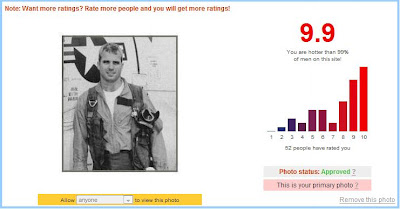 Now one would leave it as such and say, "OK, cute story, John McCain is way hotter than Barack Obama, adjusting for prime."

But what happened thereafter was interesting, if not hilarious (and sure to be a boost to the aspiring presidential candidate).

One, John McCain was "invited" (I guess is the term) to become the "Hot or Not Person of the Week." Obama had no such invite.

Two, several girls (all of the age of 20 something) expressed an interest in meeting the young John McCain, though Cindy McCain might have something to say about that. Barack Obama had no such interest (though I will readily admit the girls listed could just be a marketing ploy of the web site, still, none showed up on the Obama site). Regardless, sadly, I hate to break it to those McCain hearthrobs on Hot or Not, but John McCain is married and he is (I think) 72 years old.

Of course, looks are irrelevant when it comes to selecting the president of the United States and this was done largely out of humor and jest. However, while you may not be able to date John McCain, you can vote for him. For while he may beat Barack 9.9 to 7.2 in looks (adjusting for prime), I would surmise he equally, if not, more than trounces him in experience.
Posted by Captain Capitalism at 10:44 PM

Captain! You should be ashamed of yourself!

You post a picture of John McCain in his flight suit, and Barack Obama in his high school/college yearbook. You should have put up a picture of Barack in his uniform to make it fair.

Looks are irrelevent? Tell that to Nixon. Looks have been relevent since the advent of TV.

The graph for Obama looks a lot like a middle finger salute. Is this contrived?

Fair and balanced as usual.

How old were each of them in the photos you posted? Did you find pictures of them at same age, or just try to find the best picture of each?

I agree, the uniform makes it not a fair contest.

I can't help it John McCain was a pilot and did something with his life in his youth aside from write books about himself and become a lawyer.

Both pictures were image search results of "Young Obama" and "Young McCain."

The comparison is absolute 100% fair.

Sorry, I accidentally deleted a post a commenter made so I will try to recreate it best I can;

"You have hit on something about the McCain Obama debate I want to highlight.

Leftists find it unfair if you compare Obama vs. McCain in anything. Career, looks, etc.

Just like when you work harder than the average person and therefore make more money, it must be "unfair."

My apologies to Doug for accidentally deleting the message.

The right was always better looking than the left, as further proven in this superbly hilarious picture.

The thing is, it is a biological necessity for the left to be ugly. That, in fact, is why they are the left.

Yeah, that McCain was prime hot stuff in his younger and wilder days. I've seen this pix before, btw. I read a story about how he danced on a table with Biden's wife Jill while they were in Greece or Turkey or some next country.

The word on McCain: great sense of humor, life of the party, fun to be around, good conversation.

The word on Obama: dullsville. Ask his ex-roomie Siddiq.

Man, McCain looked like he coulda rocked and rolled with the best o' them!

Abraham Lincoln .. hot or not?

I went to Hot or Not.

For anyone to get anything under a 9 seems very, very rare.

What's up with that?

Gee... I'd have thought that the uniform would be a minus for all the left-wing women, so wouldn't the effect cancel out?

Why does Obama always look like he chewed on a stink bug?

John McCain's not hot now but I would've dated him back in the day.

Obackarama is ... always has been, always will be ... disgusting. No one who endorses the wholesale slaughter of unborn children could be anything else ... in any photo, any light, any place, any time, any century, any country.

And the camera doesn't lie.