US Federal Budget Deficit as a Percent of GDP

Well, it looks like the federal deficit has hit an all time high, as well as an all time NON-WAR high in the history of the US. Not even during the Great Depression did we spend this much more than we had coming in. 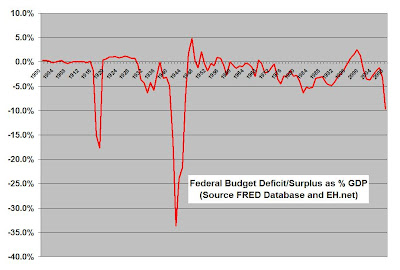 However, I have actually had conversations with several liberals who blame Bush for this recession AND in the same breath said he did the wrong thing racking up those huge deficits. Of course when I point out that Obama is doing EXACTLY what Bush did with bailouts and deficit spending, ONLY 2-4 TIMES MORE, they oddly enough don't have a response.

You see, it's all very complex, and you idiots who weren't community organizers don't understand you can't hold Obama up to Bush's standards, let alone any standards, because you'd be a racist then. So, to recap the leftist position on US fiscal policy, I've improved the chart so you'd all understand. 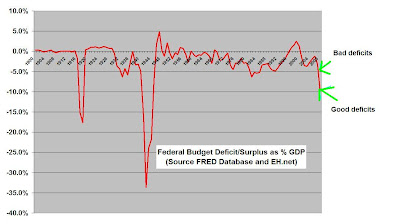 I'm glad we cleared that up. And if any of you disagree with it, you're a bunch of nazi's.
Posted by Captain Capitalism at 4:08 PM

OK, your last graph is the most significant.

Here's how it works:
Bush started the economy failing. It gained more and more momentum.

Now, that Obama has taken office, he is stuck trying to slow down the pace of the deficit Bush put in place. Much like pushing an old wreck down a hill.

See how it is still Bush's fault?

He started the wreck rolling down the hill, and then jumped out. Obama recognizing the impending disaster, jumped into the driver seat, and it trying to take control of the situation. But, the clunker is moving too fast for any immediate results.

Despite Obama's best efforts, the downward momentum that he inherited from Bush is still in effect.

That is if the economy actually had any inertia.

Too bad for the socialists, money does not work the same way as physical objects. And, any new deficit spending is 100% the fault of the current administration.

Bush didn't "create" a deficit - he inherited one.

First, despite claiming that the "era of big government was over", the ONLY departments Clinton ever cut were the Department of Defense and the Intelligence community - something he did every year he was in office.

Second, much of his spending was BACKLOADED to the end of his second term. That means he ate a tasty meal and the guy who followed him got the check.

George W. Bush had to:

1. Rebuild the military which Clinton decimated every year for eight consecutive years.

2. Pay for the recovery from 9/11 and the subsequent ramp-up of security and intelligence which Clinton had gutted.

3. Cut taxes to bring us out of recession.

5. Pay for Katrina relief and reconstruction.

The only large spending programs which truly belonged to Bush which were not forced upon him were:

2. Rehabilitation and reorganization of VA Hospitals.

Prescription drug benefits could possibly have reduced expenditures by replacing more costly surgery, but I doubt it actually did this. Of course Bush was pandering to the Old-as-dirt lobby. The Demon Rats can hardly blame him for this - they supported this measure heartily.

Bush was left cleaning up the MESS Clinton made in world affairs and ignoring terrorism for eight years. The next Republican president will have to clean up after Obama.

To be fair, there was never as much outcry as there should have been about deficit spending under Reagan and Bush. Too many on the so-called right grit their teeth and bared it, promising themselves it could be sorted out later. And now when Obama does it we can't really say "see I told you so" because there weren't enough of us complaining about deficit spending and those that were weren't loud enough.

If and when a libertarianesque President gets in, we need to hold them to the same standards.

You hit several nails on the head with that rant. I can't improve on it.

There wasn't much complaining from the Right during Reagan or Bush because both were building up a military, apublic good, which had been destroyed or ignored by their predecessors. Government SHOULD be providing public goods which are consumed equally by all. Democrats spend their most of their deficits on PRIVATE goods.

But, for the record, many conservatives DID complain about Reagan and Bush deficits. People were screaming bloddy murder about deficits 4% of GDP. Ah, the good old days!