When I make charts it's usually when I have a theory and I wish to prove it right or wrong. Most of the time, my theory is proven right. And I'm not talking like a batting average of say Christine Romer or a Paul Krugman, I'm usually right about 90%+ of the time. But this time my theory was wrong.

My theory was that because of a general decline in long term average economic growth rates as evidenced here; 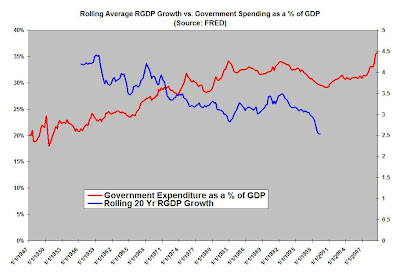 Corporate profits would also be in long term decline. I also contested the general work ethic in the US economy has declined over time at all levels of management as well as innovation and creation and this would also translate into deteriorating corporate profit growth. So I did the exact same thing below as I did above. I took REAL non-financial corporate profits over time and averaged their growth rates on a "generational" basis (20 year span).

Of course I was completely wrong. Corporate profit growth had never been higher than in the past 20 years. 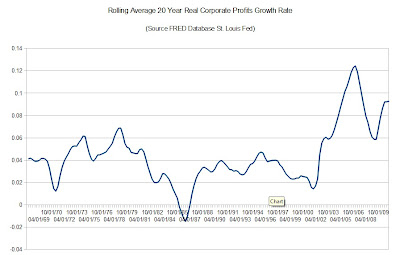 Now, many things can explain this. Two bubbles (housing and Dotcom) overstated corporate profit growth in the past 20 years and thus (barring another bubble) corporate profit growth would return to normal. Also, globalization where domestic companies have milked as much profit as they can from the domestic economy and now go overseas for growth in developing nations. But I truthfully don't know the answer.

The only real reason I posted this up here is because I put so much time into it, I was saying to myself, "the heck if I'm not posting this chart!"
Posted by Captain Capitalism at 8:27 AM

I would imagine that the flat US average hourly earnings over the past 30 years, combined with a larger reliance on non-US labor sources have something to do with it.

there are plenty of corporations willing to suckle at the government teat, and for good reason: it's very profitable.

I have to throw another wrench into the gearbox of thoughts here, although I think the first four posters have good points.

It's the maturing of "financial engineering" (a.k.a. cheating) techniques which make profits appear to be larger than they really are. In short, you tweak your financial accounting practices to push the limits of GAAP and FASB rules under the guise of it's ok as long as you don't get caught.

I know a major multinational corp which counted gains on it's pension funds as ordinary income. The same corporation loaded up some multimillion dollar equipment on semi-trailers, had the semis leave the manufacturing site on the last day of the year and circle right back in and unload so the company could book them as revenue, even though not a dime changed hands.

I'm sure a good many F500 companies play these games.

So when you're buying stocks, consider the quality of earnings and how much the corporation could be cheating and misleading the investor.

Do you have a link or maybe a chart you can post to back this up?