Banned Statistics on Education - Part I

No doubt once the NEA gets word of this they'll send their tippy top super secret elite assassination ninjas after me to shut me up. But, I'm not too worried because I figure those ninjas got their training in the public schools, and thus their assassination skills were honed under the tutelage of an outcome based programs. That is of course unless they value their assassination ninjas like they do their children, and do what all members of the NEA and public-school-stalwart democrats do with their children; send them to the private schools. Then I'm in trouble.

So here's the deal (and I'll make this short and sweet for all the busy important people, AHEM, TERRY, FOZ, MIKE, KRATOWSKI);

Since the left is ALWAYS asking for more money for education (despite record levels being spent already) I wanted to find out once and for all whether spending more money on education resulted in better educated students. So I set out to correlate spending per pupil against standardized test scores such as the SAT or the NAEP tests by state.

The results were interesting and complicated, so I decided to do three segments so as not to overhwhelm you with charts (besides I'm waiting on some data from other sources).

First comparison I did was SAT scores against spending per pupil by state. I used two measures of spending per pupil. One from the National Center for Education Statistics (NCES) and the other (as to quelch bias or criticism that the NCES is a tool of the Bush administration) the communists' favorite, the National Education Association (NEA). (I also did them in two seperate years 2001 and 2003 so as to match the exact year with the data. In other words, shut up, there's nothing wrong with the figures so just eat it and weep.) 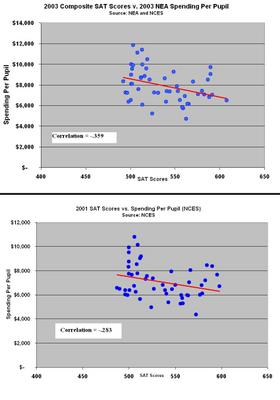 The result is what conservatives, libertarians, capitalists and free-marketers have suspected all along, and the primary reason the NEA will dispatch their tippy top super secret elite (privately school trained, however) assassination ninjas to kill me; more money does not equal better education. Matter of fact it is worse. The correlation coefficient between the two is actually negative (-.3, -.4 if you do not take out the District of Columbia which was an outlier), showing that the more money spent on the public schools THE WORSE THEIR STUDENTS ACTUALLY DID, suggesting that there is not only incompetence in the public schools, but borderline corruption.

Now here's the problem though. Not all students take the SAT, only college-bound. The above correlations say nothing of the education the non-college bound received. Thus I wanted to see if there was a standardized test out there that all students were required to take. And here's where we run into some problems.

Frankly, there aren't any standardized tests that fully capture the total education a student receives by state. Welcome to the world of substitution data.

The closest thing I could find was the National Assessment of Educational Progress' (NAEP) tests which are issued at the 4th, 8th and 12th grades. Optimally I would have liked to use the 12th grade data as this would inlclude the entire educational career of the student, however there is no 12th grade data by state. You have to go to the 8th grade data for that. And even the 8th grade data is not complete. Some years are missing, some subjects (math, science, etc.) are missing in different years. Still, wanting to be statistically correct and just to satiate curiosity, I ran the figures with the 8th grade mathematics scores by state against per pupil spending.

The ninjas may hold off.

For oddly, while more money results in lower SAT scores, more money does help 8th grade math scores anyway. The correlation is actually a strong positive one, coming in around a +.3 (note if you include the outlier District of Columbia, the correlation drops to 0, message to DC public schools; your teachers, your parents, your students and all your schools REALLY suck) 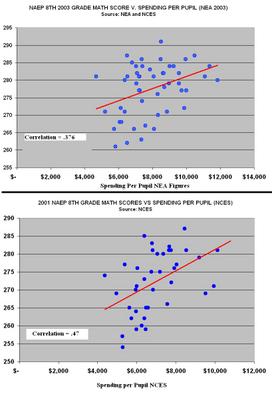 Now, obvious gaps in this measure exist. It completely ignores high school. It doesn't account for other topics like science, grammar etc., (although the NAEP has figures for these, just not in 2003 or in their entirety). But still it begs the question, why seemingly does more money benefit the average student and seemingly hurt the college-bound.

I have a theory; that the majority of money is being spent on crap programs for crap students. Programs that do not foster or promote success and achievement, but in an affirmative-action sort of way, programs that prop up the losers and celebrate mediocrity (if ever achieved). It reminds me of the Simpson's episode where Homer gets a job at Globex under Hank Scorpio. Bart is sent to a remedial 4th grade where among retarded students they play musical chairs where there are more chairs than students. The music ends, all the kids find a seat and the teacher yells out "yea!!! You're all winners!"

I'm so happy that it seems when the public schools are asking me for more money, that in reality they're asking me to pay for kids to feel good about themselves or become average. Not to help bring about the next Bill Gates or Einstein who will make greater contributions to society (and increase my chances of seeing some of my social security).

But like I said, there are some kinks to be worked out in the data and I wouldn't be too quick to draw conclusions from it. According to the NAEP data for 12th graders will be coming in the future, alas it seems we will just have to sit and wait. But the data thus far does seem to point to more public school money = poorer college bound students. No wonder home schooling is so popular.

Next issue I address some more statistical concerns and I look at a specific state where (of course) the democrats are asking for yet MORE money for education.

To tide you over until that time, here's an interesting chart I concocted that I realized is relatively pointless, but would still be interesting;

Posted by Captain Capitalism at 1:00 PM

But wait captain! You haven't controlled for socio-economic status! Poor people don't do as well, right? Some states are more poor than others, right?