If the Shoe Were on the Other Foot...

I remember this girl called "Michelle" whose last name escapes me now.

Life-long academian, will never amount to anything, will never contribute one penny to GDP. Will just bitch and whine about everything while she pursues her anthropology degree at San Diego State.

She happened to be Asian.

And on a political discussion board she made (and vehemently defended) that only white people can be racist.

Now normally thinking people...heck, just plain THINKING people will realize this is not only utterly stupid, but truly racist. Because of your skin color only whites can be racist?

I can see it now;

"Me? Oh, I'm not white, so I can spit in your face, burn effigies of white people (or any other people as well I suppose) and should I ever become an HR director discriminate and only hire Asians because I'm not white and thus, it's genetically impossible for me to discriminate."

Now, I'd like to chalk that up to just one enormously stupid and bigotted person. To think that because they're not white, they are incapable of discrimination and prejudice.

I guess I was wrong.

For you see Swanblog went and found something interesting.

His post is a bit lengthy, but the jist of it is there was a coalition of minority lawyer groups in the Twin Cities that wanted to throw a Shrimp Boil. Which is all fine and good. Until you go to the invite which I've posted below incase they take it down. 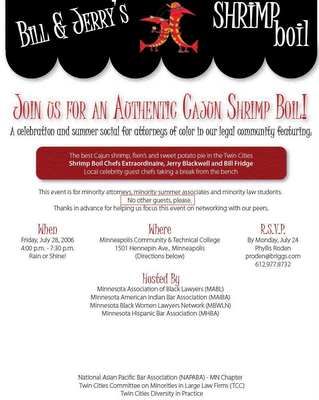 Now truth be known, I'm all for their right to choose to discriminate on who they let into their little party. If all participating members and groups decided not to let whites in, fine, it's their party, not as diverse as it could be, racist by definition if you're using race as a qualifier to attend the party, but hey, it's not my gig.

But could you imagine what would happen if the reverse was done? That instead of the Asian, Hispanic, Black, etc. lawyers guild exlcuding non-minorities the "Norwegian, British, Irish French" lawyers guild excluded minorities??? You'd have an endless assault of law suits and more media coverage than 9-11.

I guess it truly is only whites that can be racist.
Posted by Captain Capitalism at 7:51 PM

Sadly too many minorities are brought up with that exact mindset. It truly is the day where the only thing it is bad too be is a white male. The only thing acceptable to exclude is the same.

Everyone is racist, and any 'i love people of color' liberal thinking they are being the progressive one should go walk around an all black neighborhood at night and see how accepted they are.

There are indeed many people on the far left who try to define racism in a way such that, for all practical purposes, it can only be applied to white people. See the comments on this post for details.

a cajun shrimp boil that won't permit the vast majority of cajuns to attend ...

Yep, sad. Then again, what can I do about it?