Household Debt as a Percent of GDP

I compiled this chart about 2-3 years ago and thought it worth of an update. Household debt includes not just credit cards, but mortgages as well. 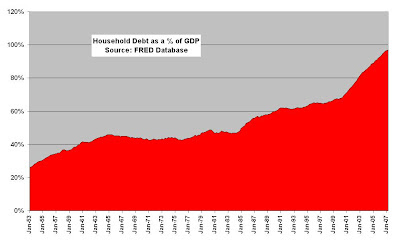 Of the many things that will bring down this country, Americans' desire to spend more than they make will be one of the key ones. Household debt is now at 97% GDP. We could all work one year and (assuming the government doesn't tax us, nor that we'd eat or spend any of our money on anything) then we could pay back our debts.

What's sad however is that this is even worse THAN THE GOVERNMENT! Federal debt as a percent of GDP last I checked was at about 48%. The government is a less voracious spender of money than the American public! American consumers and households are on par with the Italian government and it's knack for deficit spending and racking up debts.

Not to mention, as I've mentioned before, with all the Baby Boomers retiring shouldn't this figure be declining? You know, that as you approach retirement you'd pay off all your debts so you don't saddle future generations with yours? Though I don't doubt for a second it is my generation that is the primary culprit in skyrocketing this figure up since 2001.

And people ask me why the dollar is dropping.

You wrote: What's sad however is that this is even worse THAN THE GOVERNMENT! Federal debt as a percent of GDP last I checked was at about 48%. The government is a less voracious spender of money than the American public!

That is exactly the wrong way to look at it, my friend, since GDP does not belong to the government and is not created by government.

While everyone in America would take a full year to pay off their debts based on their current income, it would take the government three times that based on its current income. Of course, you can increase that to 15x if you include the current value of future promises.

Uncle Sam is in far worse shape debt-wise than the average American with one notable exception: he can simply take or print what he needs to pay his bills, while we have to work.

Another great chart, Captain. It'd be even better if you showed what percentage of the debt is mortgages, credit cards, etc. That way we'd have a nice visual cue of what is causing increases in the total amount of debt. For instance, you could see that the housing bubble starts kicking Americans in the ass beginning around 2001 or so.

Not to burst your bubble, but I'd argue that the ratio is due to the skyrocketing real estate and education prices the past 10 years - and is thus our generation buying homes and education. I know I'm only a lowly data point, but my modest school loans and very manageable mortgage still put me at about 300% debt to income ratio.

Alright, alright, if you want to get technical. Yes, you have a point, that being said it's pretty bad when the average American has more debt realtive to the economy than the government.

Let us test you economic skills. You can do that, actually, to the precise percentage point. The data is located at www.stlouisfed.org. Under the FRED database, see if you can calculate that information.

While I could pull up mortgages as a percentage of household debt for any given year, I haven't got a clue how you make your charts in the first place or even what program you use. Economics is my hobby, not my job. :(

Are you not a junior deputy aspiring economist?

Then see if you can find consumer debt versus household debt.

Use Excel, however you see fit and you should be able to make the same charts I do.

You have the power of the force, you just don't realize it yet.

I do tech support for a living. I have three years of college under my belt (Economics, of course), but I'm not a Jedi Economist by any stretch. It's more of a hobby for me, which is why I rely on the charts of others rather than making my own.

Now you know my secret shame... I don't make my own charts.

"You act as if you have a choice my fine young friend. Know that they won't leave you alone. You have already killed one of the 8 devils of Kimone."

Besides, if you're going to get into economics, they're going to require you to calculate the difference between household and consumer debt AND expect you to at least be able to use Excel.

Baby Boomers may be retiring, but even those who were debt-free earlier may now be incurring debt to fund their childrens' college or post-grad educations, or to pay medical bills for their own (or even their parents') deteriorating health (if these big-ticket items are defined as "household debt").

Your chart, or another version of it was discussed on NPR's morning edition this morning. The speaker, who I do not remember, exteded your chart back to the 1920's and showed that consumer debt as a percentage of GNP was only as high as it is now back in 1929. Both now and in 1929 debt equaled GNP while the average is 50%. The question now is how long will it take the consumer to pay off their debt to historical levels

Not all students are going crazy with debt though. At least in my area more and more students are going to community colleges first and not racking up as much debt for thier education. I see this whole crises more as a cleansing in that we need to all check our own spending. People are more thrift now or are getting that way, not a bad thing.

Forwarded this blog from a friend at the office and it raised a question in my mind... How is mortgage debt (or any categorized debt) accounted for in your graph? To me mortgage, education and auto debt are amortized debts with a finite term, unlike credit card debt which I would classify as short term debt and worth of full accounting in a single year's time frame. However if you are lumping in the total value of a mortgage, education and car into a single year than your graph doesn't really resonate with me. This point wasn't clear.