Many years ago, when the Captain was but a wee private, he put himself through college working at the campus police department doing campus security. It paid $6.90 and after three years and several promotions he was making $9.10 per hour.
I worked full time while going to school full time, but not once did I ever make more than $20,000 in any given year. However, I didn't need to, because by the end of my college days I had a surplus of $6,000 (which I bought a converitble with to celebrate finishing college). And while there has no doubt been inflation over the past 15 years, this spartan existence behooves the question;
"What is the absolute minimal amount a single person can live on today?"
I ask the question because whereas 15 years ago your young and naive Captain had dreams of working hard and establishing a long and successful career, observations of mortality and a limited life starts to make one think how does one spend their finite time on this planet. You throw in a recession, a-soon-to-be overall tax rate of 40%, the increasing likelihood Roth/401k's/IRA's will be rescinded and nationalized, and a general deteriorating future for the country it's like being the navigator on the Titanic. Inevitably you should give up trying to convince the captain to change course and just pony up to the bar and get the finest bottle of scotch.
Thus some back-of-napkin calculations to find out what, if necessary, is the absolute minimal a single person can live off of and pursue a life of leisure fully intending to maximize their free time on this planet and not to build up an estate or empire. 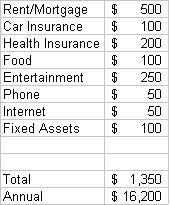 My estimate is in today's dollars $16,200 in annual income should cover every bachelor's basic desires and needs. This of course assumes several things;
1. Never a new car, always used.
2. Liability insurance only
3. No children
4. Catastrophic insurance only
5. No traditional "$25,000" wedding should he/she get married.
6. Living in an area that is NOT New York or San Francisco or some other expensive area to live
7. Roomate or a cheap one bedroom apartment
Now I am being serious here because I want to make sure I've caught everything. Do any of the Cappy Cap readers see something in my budget that is missing? The reason for my adamancy is because if we can calculate a precise number, then it will allow people to look at their personal finances, see if they can live on that amount, and if so, then weigh whether a life of slaving away for $60,000, $35,000 net, not to mention the standard corporate political BS that comes with it and complimentary high blood pressure and 2 hour commute, is a better existence than working some night time security job for $18,000 a year and fishing and reading books.
Posted by Captain Capitalism at 7:51 AM

I think your food budget is too low. $100, even for a single person, is not much for a month's worth of food.

Very few people are able to understand what you are discussing.
A good example is a new mother returning to work. The parents hire a nanny, or day care, to care for the newborn. The cost is paid out in after tax dollars. In many cases there is no net gain (or very little) in after tax dollars, for the working mother.
Now try to explain that one, to some new parents.
You can also throw in the welfare question. Why bother with the low paying job, when the government will send out a monthly check.

You can trim down your costs by using skype instead of a landline. So for $60/year you can get a phone number attached to your skype account.

So unless you call oversees a lot, our total monthly cost is now $12/month. Thats an extra $450 in your pocket annually. Not a bad chunk of change.

If enough of your friends are going to use Skype anyways (and why not, its free) you may even get away with pay as you go for the calls to/from landlines.

While I recognize that this is a back of the napkin estimate, I do not like the process. Seems a lot of the numbers are, for lack of a better term, pulled out of your...errr... let's say the air instead.

There are WAY too many questions that need to be asked before you can come up with a number like that.
Location, lifestyle, tolerance for discomfort/other humans, etc...

For example, there are plenty of places where you can get a place to live for less then $500 a month. Notice I did not say a nice place to live, just a place. What is your tolerance for rifraff?

Auto insurance, same thing. A lot of that cost is not your driving ability, but the statistical probability of accidents from the general area. Sure safe driver discounts, etc... still, move from MN to Memphis and watch what happens to your liability insurance rates.

What I would do, before I decided to sketch out any "back of the napkin" numbers is keep track of where my money goes for several months. Three to five at a minimum. Categorize the spending into those categories. Find out what it really cost per month for you to remain in the lifestyle you currently live.

Then, decide what you can cut back, and how realistic those cuts are. If you currently spend $200 on food, odds are you will not be able to cut that back to $100, look elsewhere for cuts.

There are plenty of places in the US where you could live reasonably well for a net of $16,200 a year, but you would be giving up a lot. And one of the things you would most likely be giving up is the ability to save a portion of your take home pay. Sure limiting your insurance to strict liability/catastrophic insurance is a great way to save money, but it does you no good if you do not have sufficient savings to cover the deductible.

I strive to keep spending below $25k.

This includes a $1,000 mortgage and a few hobbies.

Are you not discouraging people from taking risks?

Or is this pent up anger?

Unless you are eating pasta every day, that food budget is way too low. It should be at least $150-200.

I lived off of $100 a month for food 4-5 years ago. You eat a lot of generic brand cornflakes (they were a dollar a box at Wal-Mart then) and frozen vegetables. Dunno if I could do it with inflation since then. I'd put it at $150 to be on the safe side and ensure good nutrition.

I currently live in a place for $500 a month, but it has two bedrooms and I split it with a room-mate. It's all a matter of where you live; I could find a cheaper place if I wanted to. You can knock half off of that.

It's also possible to live without a car, but you basically have to plan your life around it. Write off $50 a month for occasional bus fare or gas-money bribes if you actually do need a ride someplace.

Then there's $250 a month for entertainment. I don't spend anywhere near that much.

Found someone who lived in NY for 30 days and spent less than 30 dollars on food.

And according to Forbes Magazine, the Twin Cities are already a cheap place to live.

Ok, I shouldn't mention this, but why not try to live as cheaply as possible, and then share your experiences and tips for things to do and things not to do to make it work. Perhaps do a blog on it or maybe write a "Field Manual for Economic Dropouts" or "Total Economic Freedom".

One of the things I see about that lifestyle is that you have freedom and time to do what you want to do and by minimizing what you own, you also minimize all the things that own and entangle you.

I think you are generously overestimating most of these. Even in the San Fran area you can rent a small room for $300.

Internet and phone costs can be at least $10 cheaper, each. You have to add gasoline and utilities unless that's included in entertainment. Taxes?

Overall, I think the final total is about right. I once lived on a food stamp budget for a month to prove to a liberal that it could be done, easily and with proper nutrition.

What about health care costs? When we take control of our health care decisions, we can help control costs. Check out Whatstherealcost.org for ideas.

Well I live on the food budget of $100.00 usually uptp 150.00 for sale items and I stored over a years worth of food on that budget. I make most of my food from scratch.
I also coupon and buy mostly Loss-leaders and sales.
I use Magicjack for 20.00 per year.
I live on just under $1300.00 per month. It's doable but does take a little work and you do have to give up on wants not needs.

I like all these ideas and would/could do the same, except I would first have to divorce this mean old man I'm married to 'cause he hates beans and loves beef.