Proof Cain is the Best Candidate

The reason Cain is getting assailed and assaulted is because he IS the best candidate out there and would surely trounce Obama. Do you remember "Operation Chaos?" Rush's effort to get Hillary nominated because she would do worse than Obama against McCain? This is the same thing.

The fact the MSM doesn't even list Cain below (but Jon Huntsman???) shows you they KNOW he is the front runner and the most viable candidate. They have to convince you otherwise.

I just don't know how much clearer I can make it. 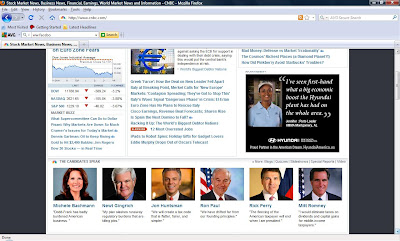 You can contact CNBC and ask them the question I did:

"Why, if Cain is nothing but headlines news when it comes to sexual harassment and affairs, is he not even noteworthy when it comes to his candidacy."
Posted by Captain Capitalism at 2:10 PM

With a complaint media, Obama waltzed into a position he was, and still is supremely unqualified for. His message is the one they portray. If Cain drops out, the next candidate to disappear from the news will most likely be Perry. Oh, he will still be in the race, just be zero coverage.

I don't really watch the situation in the US that closely, but I'd say a few fake harassment accusations are nothing against completely ignoring a candidate's existence.

I have to agree with Sonny. CNBC's exemption of Cain in that image is certainly questionable. But if media ignorance was any indication of front-running, Ron Paul has him beat by a long shot. Not only have most of his straw-poll victories been ignored by the media (contrast with Cain's Florida win that earned him quite a bit of coverage), he is usually left out or laughed about when media figures discuss the candidates' viewpoints.

Or how about Gary Johnson, who's been left out of all but two debates. Who decides this crap anyway?

What else can these liberals do about Cain? Their standard tactic is to insinuate racism, but that clearly can't work here.

I think Ron Paul is ignored by the liberal media not because he threatens to beat Obama by becoming the Republican nominee, but because he draws his supporters from the same youthful, idealistic base that Democrats typically count on. When it comes time to vote for president, a lot of them will realize that Obama-brand New Deal socialism is more dissonant with their views than is Romney-brand conservatism.