"Why Is Everything So Expensive for Millennials?"

"The perfect example of this is President Obama and it’s an important economic lesson for all of us to understand.

If there was a rockstar politician that the Millennial generation squealed like teenage girls at an Elvis concert over, it was Barack Obama.  He was everything they were programmed to want.  A polished, intelligent, socialist-light, black gentleman, who was going to cut through the politics of Washington and *finally* bring some sort of justice and fairness to the people.

Facing the financial crisis of 2009 he increased government spending more than any peace-time president before him in real terms.  He ran deficits well over a trillion dollars for the first half of his presidency and paid for it by printing money.  That money went to a potpourri of social and socialist programs, but as it pertained to Millennials specifically, Obama started lending money directly to students under the federal government so those students would not have to deal with any of those icky, mean, evil private lenders.

To the untrained, ignorant, and young Millennial eye, this seemed great.  It seemed as if President Obama was going to help them.  He was finally doing something to help lower tuition unlike all politicians in the past.  But as it is with every deal with the devil, when you don’t adhere to reality, there is a price to pay.  Because in flooding the college market with $100 billion a year in extra student loans, all he really did was jack up the price of tuition.  In other words, he achieved the opposite of what he intended to do.

If you really wanted to lower tuition you would DEPRIVE colleges of money, NOT FLOOD THEM WITH HUNDREDS OF BILLIONS MORE.  You’d cut all government loans and lending to students.  You would also, ironically eliminate all scholarships and parental money from flooding the college market as well.  And if you really wanted to lower tuition, a year of high school seniors should have boycotted college for just one semester, starving all colleges of tuition money, forcing them to drastically cut prices.

But the honest truth is President Obama, though well-intended, was woefully ignorant and uneducated about economics, just like the Millennials he was trying to help. And in voting for him, all Millennials managed to do was jack up their own tuition and their own student loan balances, of which they would pay unnecessary interest on for at least a decade to come.  The Millennials simply shot themselves in the foot.

The deal with the devil gets worse.

Because money doesn’t just stay in one place once it’s printed.  It circulates.  So once those trillions of dollars came hot off the presses they went into the hands of contractors, welfare recipients, college students, and the millions of other people who got some of that newly minted money.  But no matter who got it or how many people did, that money inevitably and invariably ended up at the same place – the bank.  And banks make money by lending it out.

If you think about it, banks only lend money for large purchases people normally can’t pay cash for.  Thus relegating most loans to four key areas:

And though according to the Consumer Price Index there is no inflation, if you look at what the proceeds of those bank loans went to purchase, you’ll find there is indeed a ton of inflation in the market when it comes to:

In other words, in printing off all of that money, Obama (and Bush Jr and more recently Donald Trump) merely flooded these respective markets with money, driving up their prices.  So all the Millennials really managed to do in voting for Obama and all that *free* money he was going to give them, was

The Millennials made their deal with the devil.  Now they’re paying for it in spades.  Even if the “devil” was a very nice, well-intending, politically correct, socialist-light, affirmative action president." 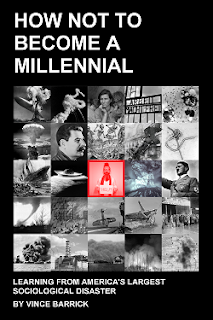 Posted by Captain Capitalism at 8:30 AM

So I come to the library to specifically buy this book through the Amazon Affliate program, and what do ya know? There's an excerpt from the book up to read!

Reading this just brought back bad feelings of what I was living through back then as a millennial who was hungry and wanted to be successful in life, but there just wasn't enough room to grow. "Mr. Brightside," by the Killers started playing in my head...Which is A song about a man who's chasing his dream, and is imagining his girlfriend cheating on him, but he has to block it out and keep going with a happy face on like nothing is bothering him.

Got to agree with anonymous. Don't know what Vince's costs look like, but will probably sell more copies.. And make more money, at a more reasonable price point.

But then, I'm not an economist, so what do I know?

Dude first you sell the book to another guy....then he decides to sell it for 30 bucks?

Are you trying not to sell books or what? Seriously.

As they say, the lesson has been delivered.

I really hate to make a correction, so I will call it an update:

"In other words, he achieved the opposite of what he **alleged** to do."

Wait, so giving up the avocado toast and Starbucks won't be enough?

If you are a millennial, this book will really set your mind straight to the reality of the world and cut through the BS and lies fed to us from the past 50 years of social programming which has failed the millennial generation. If you have a chance to get the book, it will change your life.

Hi everyone, I saw comments from people who had already got their loan from
Anderson Loan Finance. Honestly I thought it was a scam, and then I decided
to make a request based on their recommendations. A few days ago, I
confirmed in my personal bank account amounting to 12,000 $ , which I
requested for business. This is really good news and I am so happy that I
advise all those who need a real loan and who are sure to reimburse to
apply through their email (text or call) +1 315-329-6320 There are sincere
loan lenders!