OK, one more time for the cheap seats;
THE INSURANCE INDUSTRY IS NOT THE PROBLEM. THEY DO NOT HAVE HUNDREDS OF BILLIONS IN PROFITS. THEY ARE NOT THE CAUSE OF YOUR HEALTH INSURANCE GOING UP.
This isn't an opinion. This isn't a suggestion. It's just an "inconvenient truth" (that actually happens to be true) that leftists just plain refuse to verify or confirm.
Here is United Healthcare's income statement from their latest annual report. 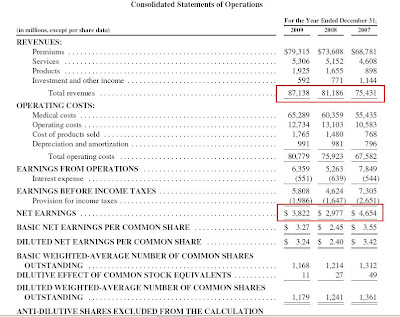 If you compare the revenues to profits, you'll see they have roughly a 4% profit margin. A COUPLE billion in profits. Not the hundreds of billions Obama says they have, let alone the trillions he plans on spending.
"Yeah, well those greedy insurance executives are hoarding all the money paying it out to themselves!!! That's why their profits are so low!"
Really??
REALLY???
Because, frankly, I've yet to meet a liberal, the president included, that has had the intellectual honesty to look it up first. 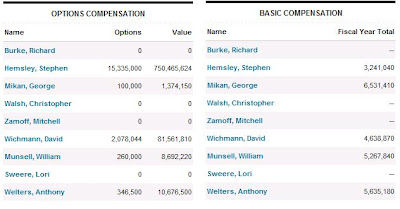 Look, at that. Under $1 billion in executive compensation AND THAT'S ASSUMING HEMSLEY CASHING IN ALL OF HIS OPTIONS RIGHT NOW.
If you don't believe me, just look it up here.
The ignorance of the average American is disgusting and I will be happy to watch all the idiots that were taken in by this group of charlatans ask 20 years from now why GDP per capita is down to $20,000 in the US.
Posted by Captain Capitalism at 3:56 PM

You're right about the insurance companies.

But the Obama Administration and the Democrats have more or less coddled the pharmaceutical sector - in exchange for their support and even advertising of behalf of the Obamacare debacle, and the American Medical Association came out in favor having also received a back-room deal/promise.

I guess under the Rules for Radicals, you have to have someone/thing to falsely villify.

Apparently, the health insurance industry didn't buy off Obama and the Democrats like big Pharma and the AMA did.

And don't get me started about how AARP has betrayed and bamboozled most of its membership.

For the record, I have no idea what time period Hemsley gathered his stock options, but I think he's overpaid.

"The ignorance of the average American is disgusting and I will be happy to watch all the idiots that were taken in by this group of charlatans ask 20 years from now why GDP per capita is down to $20,000 in the US."

Knock yourself out. If the economy ever tanks like that, I intend to market my skills out to other nations that will allow me to make money.

H.L. Mencken said (frequently) that nobody ever lost a nickel by underestimating the intelligence of the American people.

Political and economic events of the last few years have proven him right.

I have yet to hear how this bill is going to be paid for.

Lotsa smart-aleck comments, not so much clear thinking.

I forgive women and children for being liberals. But men need to be men. Not pussies.

You know who you are jason, you little girl.

The only company I can think of off the bat, whose profit margin I would consider obscene, is Apple. (23%, or something like that)

Of course they have a right to charge that much for their computers, but it's clear that 90% of computer purchasers are smart enough to understand that they can get the same amount of power in a comparable Windows system for half, or at most two thirds, the price.

A 10% profit margin shouldn't be seen as outside the norm, so the health insurance companies are clearly operating on these margins deliberately, for which they deserve credit that the idiots will never give them.

Well, I suppose that might change now that our 'leaders' in Congress and Zero, My Hero are going to ensure they get around 32M more customers, and will subsidize it for anyone who can't afford it (in theory). At least, that's my understanding of it. I'm always interested in more information and projections, if anyone has them.

According to the market-research group Datamonitor, medical inflation is the reason for yearly increases of 8% in health insurance premiums. The steady progress in the development of new drugs, therapies and equipment used to diagnose medical conditions and the resulting costs are an obvious reason for this. This is understandable and everyone wants the latest in diagnostics and treatments. Equipment becomes obsolete with time and invariably the very words newer and improved mean a rise in cost.

You should also consider the fact that options provided to employees are classified as expenses and can hence be deducted from earnings to arrive at the net profit figure. So...potentially, earnings could be 1 billion higher than stated if EXCESSIVE compensation for high level executives were reduced.