Jobs losses "under Bush" vs. "under Obama." 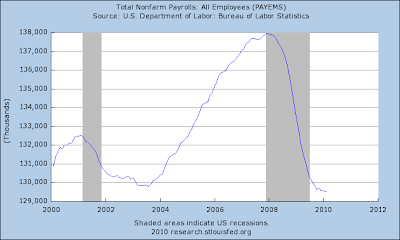 What I love is that both presidents inherited recessions, but guess who the media loves to blame for both, even though it was neither of their faults.
Also, on a side note, anybody else sick of 20 somethings, let alone older adults blaming the economy on Bush who in the same breath then complain about how they had to go into foreclosure on their home because they borrowed too much money?
Posted by Captain Capitalism at 10:40 AM

These government numbers are a fudged up joke. The CPI numbers are the worst. Every price setting piece of data has an "adjustment".
I love the spin they threw out today regarding winter weather, and employment numbers. George Orwell`s 1984, is hitting a little too close to home.

My pet peeve was the constant harping, during the Bush II years, that the economy was horrible. I don't perceive the same level of shrillness.

An analysis of Lexus Nexus on this matter would be interesting.

1. The economy was horrible under Bush because the news media told us to see it that way.
2. Just today, there was an article about how Obama is encouraged because the unemployment figures have "stabilized".

The economy was not all that spectacular under the Bush admin, but it was worlds better then this.

And, I too am annoyed about how these jackholes who bought too much house requiring two+ salaries are mad because they cannot afford them. And, somehow, I have to bail them out because we bought a house we could afford on only one salary.

The FRED system is very cool but take a look at this:

You can configure your own charts and link or even embed them (images or dynamic chart player) anywhere.

I have said it before, and I will say it again; history will be kinder to George Bush than the american media ever was.