In full intellectually honest disclosure I must admit that the day after the election I intended to drive around and visit all the coffee houses in the Uptown area of Minneapolis.  This is where all the hipsters who live off of their parents or taxpayers' monies hang out to convince one another that they are all smart, independent minded, and special while epitomizing the word "conformity."  I wanted to see them in their misery.  These are the same leftist sheep who voted to destroy this nation, who constantly remind me that I'm evil because of my skin color and plumbing, and at such a young age have the arrogance to think they're smarter than people who have been on this planet twice, even thrice as long as they have.  I also knew they were worthless people, having no real value to them except their religion of politics and political crusades.  So with this defeat their entire life-meaning and purpose would be called into question in their minds and I wanted to witness this show as I rightly deserved to enjoy their grief.  But before I could even get to Uptown I started noticing on the interstate...

Normally at that  time of day the roads would be "slow and go."  I would get mightily frustrated and it was the largest factor weighing on my mind against going to Uptown.  But then a thought occurred to me.

Quickly I grabbed my cell phone and called my girlfriend.

I said, "Girlfriend, was traffic bad this morning?"

She said, "No, it's almost like it was a government holiday.  Why?"

I called a buddy of mine and said, "Buddy of Mine, how was traffic this morning."

He said, "Traffic?  What traffic?  It was like a weekend!"

It then dawned on me that Donald Trump had triggered so many people in the Twin Cities that enough of them called into work sick that there was no morning rush hour.

I tried to do some actual journalism by calling different Twin Cities employers to see if a higher than normal number of people called in sick.  None of them could disclose that information because of company policy  But the more ancillary and indirect evidence I saw, the more I realized it HAD TO BE weak-minded leftists calling into work because they needed a "mental health day."

There were the numerous reports of colleges accommodating students who were traumatized by a Trump win democracy.  The baristas I talked to said business was slow.  And Uptown was a ghost town.  I had not seen it so desolate ever. 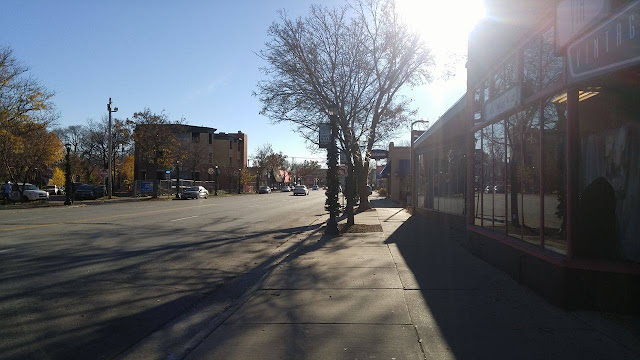 This then made me realize it wasn't just your average college kid who was this weak, but damn well near 20% of the adult Twin Cities population.  There are so many weak, emotionally fragile people that a democratic election triggered them to the point they had to call in sick for a day.  Of course, the real reason for this odd phenomenon was not that these petulant little children with pubic hair couldn't handle a Trump victory.  It's that society has brainwashed them, conditioned them, and spoiled them to the point that at the age of 30, 40, even 50 they actually think in their feeble minds they're entitled and need to take a day off because things didn't go their way.  The constant Minnesotan-socialism-pampering they're received these past 3 decades both in terms of government checks and pretty lies they were told about themselves and society, has resulted in a major metro area populated by pussies who simply cannot handle real life.

It is here I will say it again, as I've said it before,

DO NOT MOVE, INVEST, LIVE, OR GO TO SCHOOL IN MINNESOTA!

It is a socialist hell hole with the contiguous US' coldest temperatures, which is only outdone by the world's coldest people.  They are arrogant, snooty, dumb, clueless, and smugger than the smuggest of faux intellectuals.  Out of the entire country there are THOUSANDS of infinitely better places to start a business, find a spouse, raise a family, attend school, retire, or just plain enjoy life. Because if you have to wait for a republican presidential victory to make it so traffic is tolerable you are dealing with a highly pampered and spoiled society.  One that is very unlikely to offer anything of value to genuinely productive and intelligent people.
________________________________
Visit Aaron's other sites so he never has to work in banking ever again!
Podcast/
Asshole Consulting
YouTube
Twitter
Books
Amazon Affiliate
Posted by Captain Capitalism at 9:01 AM

Fair enough, i dont think minnesota has been red since the 50s. Trump damn near won the state tho, in what would have been the craziest flip ever

Given that most of those fucktards do nothing productive anyway (can a Hitlary supporter even be capable of being a useful contributor to the market economy?), the "sick out" probably had almost NO impact on the local PRODUCTIVE, PRIVATE-SECTOR economy.

Food for thought: Those businesses who had people "sick out" on them should just fire them. "If you don't think that you're essential to the operation of our business, why should we think so? What added value do you provide and what are you doing here in the first place?"

Here is my theory about Minnesota that might explain it's character:

If you visit the Nordic countries: Sweden / Norway / Denmark Iceland (Finland not so much), you will see weak and feminized men who are effectively neutered by feminists. Because masculinity is seen as too violent and not cooperative and caring enough. It is very sad and pathetic at the same time considering they were Viking warriors once.

I've been enjoying the suffering of these libtard faggots. It's been fun on Fecesbook trolling the women who post at the Huffington waste. I told leftist friends that if I could celebrate properly I would buy a box of the biggest and fattest cigars I could find and stuff up their a__ses.

They are all too self centered to realize this about how most of us felt when Obummer was elected. And I've asked if any would like to apologize on the ugly cunt's behalf about those deplorable and irredeemable comments; no takers so far.

Also amusing to notice that most of the femcunts who voted Hildebeast are usually a government parasite of some sort especially with a worthless education degree.

The solution to "blue flu" is simply not to hire "blue fools" in the first place.

The problem with implementing this policy is that "blue fools" are easily exploited for economic gain, and so there is profit to be had before tending to the core of the business simply by doing that.

The people being exploited for economic gain think it's part of the nature of the system.

They're wrong -- they're just that fucking stupid, and they will never understand this and many other things.

Why give these people premium pay when they'll gladly work for common coin and then scheme to take more of your money through "value transferrence"?

Sounds to me like MSP needs The Wall, and that "blue fools" need to pay for it. :-)

Mary Tyler Moore, you're not gonna make it after all!

Glad that I didn't accept a job at my former employer's headquarters in Minneapolis. It turned out to be more of a liberal hellhole than where I live now..................

Really? L.A. has been a traffic nightmare since Tuesday morning. We were hoping people would call it a day (or week, even better) but nope.

What are you doing in Minnesota ? How about moving to Texas, Arizona, Alabama ?

What are you doing there despite the cold, tax burden and politics ?

I would be curious to know. Cheap house prices ?

Also the fact that they had staid up all night waiting for the results. "I'm tired, sad - better call in sick today". Like a bunch of overgrown children.

All the red Minnesotans should hope over to Hudson Wi and live there. More and more jobs and better and better government. :)

This emotional/psychological 'sensitivity' (to such a simple thing as an election defeat) that these Leftist weaklings are exhibiting is especially illustrative of just how they have been pampered and protected from 'getting their feelings hurt' all of their lives. You don't build strength of character by only giving trophies and awards for participation (so that anyone 'doesn't get their feeling hurt') and making everybody feel "equal".
One wonders (I do, especially as a veteran and an historian) just how these types would react to a 'Pearl Harbor attack' or a '9-11 terror attack' without going into panic seizures. People like these would stand NO chance at all (on their own, anyway) against the Muslims if they go on terror and rape sprees here like they have done in France and Germany.

I wonder how many just couldn't face the well-deserved mockery they knew would be their lot.

Not just MN, DC was 1/2 empty too. It would still look busy to the untrained eye, but it was noticeably less crowded.

The Trump Stumped DC. By simply winning, he may have begun to #DrainTheSwamp.

Hey, Steve @5:43pm, stop promoting those assholes move to Hudson. We don't need or want them over here!!!

HEY CAPPY FANS, HELP CAPPY PAY OFF HIS FUCKIN' MORTGAGE SO HE CAN SELL AND LEAVE MINNESOTA!

I think Texas would be to your liking, especially the Hill Country away from Austin.

Everything's not just bigger in Texas, it's also LARGER! :-)

Once you get used to fucking with people in a good-natured way, you'll fit in with Texans ... or Floridians, for that matter. :-)