Hadn't heard that term in a while...that was until I was the unfortunate bystander to a "dude-bro-douche wedding" as I sat in my hotel lobby availing myself of the free internet.

Upon hearing that, sure enough, I looked up from my laptop, and there was your stereotypical frat boy about to take the first step towards getting divorced get married, drunkenly slurring to the security guard about how much he made and she didn't (there will be a VERY interesting story about this in my upcoming podcast).

So the ole Captain decided to do a little research on the FRED database at the federal reserve to see just how much "Six Figures" was nowadays in terms of "Cappy Dollars."

This presented some minor, but technical problems as there is not universal year in which "six figures" actually meant something.  But since your ole Captain knew that was a lot of money when he graduated from college (in 1997) he decided to arbitrarily use that year as a base and make some calculations and observations from there.

First, "six figures" which was no doubt a princely sum back in 1997, is worth no more than $67,700 today.  Certainly a decent wage for a late 20's/early 30's douche, but not what it meant back in 1997, and certainly nothing to be bragging about to a security guard protecting your drunk frat boy ass at his own wedding. 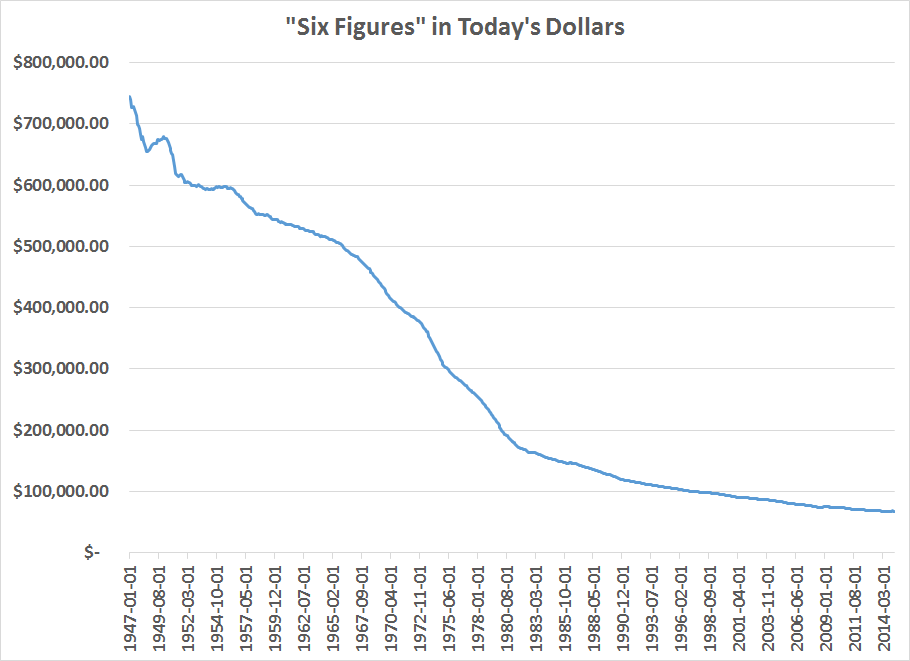 Second, if you felt compelled to actually make what the equivalent purchasing power of six figures meant back when it meant something, you would have to make $147,500 today to earn those bragging rights. 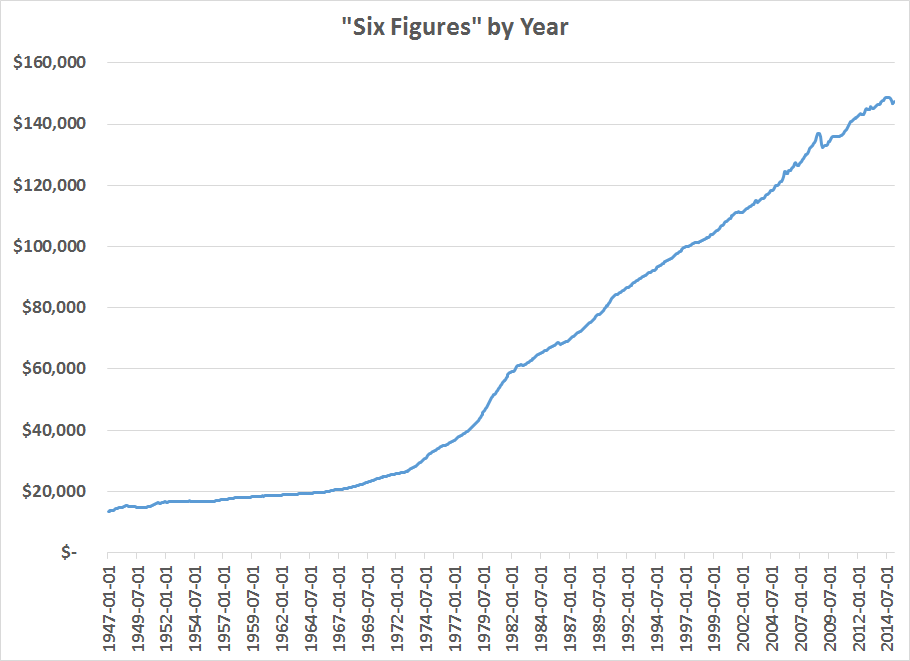 But the two charts above also point out some interesting observations and the effects of inflation.

If you were a baby boomer, making "six figures" during Ford's administration, you were pulling down the equivalent of $300,000 today.

But sadly, with the effects of inflation, compound/exponential math, today's young "go getters" and "business leaders," "six figures" really doesn't mean anything anymore as it is now an obsolete metric of success, wealth, and income.  You only make $67,700.

So today, if you're going to brag to people about how you make "six figures."  Realize that's like saying to all generations and people before you,

You aren't rich.
You aren't special.
And you certainly don't have the right to be degrading people who make less than you.
Posted by Captain Capitalism at 7:28 PM

6 figures isnt much at all.

Remember the government steals most of it. This is socialism.

It hardly pays to work at all--everyone else benefits.

YOu don't even get respect for it--just harassment.

$100,000 still means something because its around the 80th percentile (http://www.whatsmypercent.com/). This follows the Pareto principle and the 80/20 rule. Where 80% of females go after the top 20% of males. Of course income varies by age, but if you make 100,000 your guaranteed to be in the top 20% of a local subset. At least in the income bracket.

Thank you so much Aaron for making this post.

Honestly, I am fed up, literally fed up of always having to hear Americans scream from the top of their voice that they make six figures.

"I make six figures, I make six figures." I hear this all the time on so many radio shows, that it makes me wonder if America really had a recession, because judging by all these narcissistic douchebags that love to show off, it seems America is fine.

Six figures may not be what it used to be, but it's still not THAT easy to make even after all the inflation so far.

The other day I punched in my first starting salary in 1999 which was $41k.

Using the West egg online calculator which provide the lied about inflation rate at that, that 41k is now 57.5k. I was certainly not making that at my last job after several years.

Salaries and wages are pathetic for everyone whether blue collar or white collar.

We have an erroneous view of low income workers. We speak derisively of burger flippers and security guards and waitresses...but at least they're WORKING, and not languishing on welfare like most of the turd brained scum on the dole. We need to respect that.

For me six figures is enough. Where I live - sure - you could make more but you have to work for it. More stress, more hours, less time with the family...and as Cecil notes the guys that benefit the most from your sweat are those that shouldn't.

I am not rich but I'm free - and I intend to stay that way.

Wow, what a douchenozzle. Big effin deal that you make 6 figures. If you know how much fiat money you "make" or "have", you really don't have to much fiat. Luckily, the security guard showed some professionalism to this douche.

Haha, when I did my taxes a few months ago I found out (after investment gains, bonus, and other income) that I finally crossed that 6 figure line. And it definitely feels like I make about 65k, which is the number, back in high school, that I though would have me set for life. I'm better now than ever, but it's just not as comfy as I had hoped.

Hey Aaron, I've been loving your videos, can you please do one on paying off student loans fast? Thank you

The term "six figures" was intentionally created to be vague so that high earners could communicate their sallaries without being crude (using real numbers). Now douchenozzles use it to be crude and the humble people use real numbers (rounded).

There is a whole lot of space between 6 figures and 7. but most people who say they get 6 figures are at the bottom of that.

6 figures isnt much at all.

Remember the government steals most of it. This is socialism.

Yep. Through direction taxation and slow, long-term INFLATION, which is really just another form of taxation.

While a single man could live VERY comfortably on even a low "6-figure" income, this drunken chump who is about to get hitched is going to very quickly find out that his new ball-and-chain is going to be an insatiable, avaricious materialist who will NEVER be satisified with what he brings home. From now on, it will be moar, Moar, MOAR.

Guys 75 years ago no doubt bragged about bringing home "five-figure" incomes thinking it would always mean something. At least those were the days when confiscatory taxation and inflation didn't go hand in hand, so the illusion lasted for at least a little bit longer.

As the saying goes "It is not what you make, it is what you spend"

In the book The Millionaire Next Door I believe the research states the average millionaire (net worth) makes approximately $75,000 annually throughout their working life.

The fact of the matter is pretty much anybody at any salary level can become wealthy if they put their mind to it. I highly doubt douch-frat boy will ever be in the wealthy category. He might have nice stuff and a wife with silicon tits but he will have more sleepless nights than that female security guard.

six figures isn't what it used to be.

And yes, inflation is the destroyer of worlds.

Notice that taxes are never indexed to inflation? My "six figures" barely geta me into the middle class here in the northeast.

But I'm taxed on that income like I'm old-time robber baron. When the boss announces bonuses, I divide that number by 2 - and I'm usually pretty close to the actual check amount once I'm done paying my fair share.