The Case to Bring Back Dowries 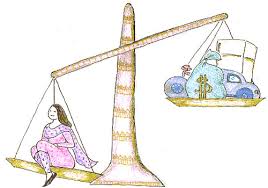 Focus, if you will, solely on the financial and economic.

And what you will realize is that nearly every man today has a right to demand a dowry.

If you don't know (or never knew) what a dowry was, it was a payment the father usually made to his would-be son in law to take his daughter off his hands and care for her into the future.  This was based on the premise that women did not work, would likely bear children, would stay home to rear said children, and would in a purely accounting sense be a financial liability to the family, earning no income.  And so, the would-be husband would be entitled, if not required, to some kind of financial recompense to take the financial liability of a woman off the hands of her father.

How is it any different today?

If there was a time young women were not a financial liability, but an asset, it was the boomers and Gen X'ers.  These women were workers, they were employed, and they did take care of themselves.  But today's generation of young women (who are also at the age of marriage) do not present young male suitors a similar financial proposition or condition.  Matter of fact, most young women today are horrifically bad financial liabilities, and any young man who commits to them risks tanking his own finances.

This isn't primarily due to young women not working.  They most certainly do, and at labor force participation rates higher than any generation of women past.  But the financial liability nature of most young women today is due to student loans and the education scam that destroys their finances.  Young women, too cowardly to commit to a real degree like STEM, are lured too easily to go $120,000 in debt for worthless liberal arts degrees that offer them no employability.  Worse, the indoctrination they receive in college weaponizes them against men, instead of making them partners and lovers in life to help one another.  And with the repeated indoctrination that women should NEVER rely on a man, the end result is not only often a girl who is a financial risk, but is a girl no man wants.  Endebted, talentless, unemployable, and ideologically programmed to be against men, marriage, family, and love. Even women trained in STEM, who are imminently employable, are often times indoctrinated to be antagonistic towards men, increasing the risk of divorce, adding a huge legal risk to a financial one as well.

Traditionally, logically, and "accountingly," such a proposition would require some kind of financial compensation for the legal and financial risks of committing to a modern day western woman.  And today, young men (or any man) is well within his rights to demand such a modern-day dowry.  But since most boomer and Gen X fathers have no money (and are likely financially compromised through matrimony as well), demanding a dowry today is moot.  No father today is going to pay a "dowry."  Besides, you're asking to marry his "pwesschiouss wittle pwinccessss" and "nothings too good for daddy's little princess."  Thus demanding such a dowry is going to be a non-starter.

This leaves us at an impasse.

Most men simply cannot afford to take on that risk, and even with a dowry the non-financial risks are just as costly and daunting as the financial ones.  Yes at the same time, men are biologically programmed, nay, compelled to want to get married and have kids. And so what is likely going to happen is what's been happening for quite some time now - men are balking.  They're going to punt.

The increase in cohabitation and the abandonment of marriage is a sign of men waking up and eschewing the legal and financial risks marriage presents to them.  Simply punting on marriage and family formation, postponing them until men have their personal finances together is another consequence of this.  Men abandoning it altogether and women opting to start their own family through IVF is a third.  And such marriage-avoidant behavior will continue as the internet educates men about the unacceptable legal and financial risks marriage presents to them (or, frankly, they just saw their dad get butchered in divorce court).

And so what we've seen this past 20 years, certainly the past 10 will continue.  With no "theoretical dowries" and marriage being such a bad deal, more and more men will simply leave the marriage market because they can't afford it.  What relationships show promise will end up in co-habitation, but nothing as traditional as "till death do us part" - most again ending after a few years.  Young men, who typically have precarious finances themselves, will choose Maslow's hierarchy of needs of food, clothing, and shelter to survive, rather than risk their ability to feed themselves on a family that has a 50% chance of ending in divorce.  And there is seemingly no signs of the training women receive to not need a man abating.  Women have, are currently, and will be further programmed to "never rely on a man," viewing them once again as adversaries, making them less feminine overall and therefore less desirable to men.

What I don't think most people realize about marriage, particularly women, is that the price of  marriage has been so skewed, so inflated these past couple generations, it's more costly than men's biological-hardwiring is strong.  And whereas you may think you have a monopoly on this product of marriage/family/love, the empirical data is showing men are punting.  Porn, NEET-dom, lack of exercise, video games, the decrease in marriage, or just confirmed bachelors, men are indeed leaving the traditional marriage market.  It's not what they want to do, but what they're forced to do.  Unfortunately, for any trade to happen in economics, both parties need to be better off after the transaction.  You need to consider whether the price you're demanding can be willingly afforded (or afforded at all) by the counterparty.  And given all the risks associated with marriage, as well as the financial, psychological, emotional, even political risks women are bringing to the table these days, it's doubtful even dowries will convince men to return to the bargaining table.
_______________________


Sponsored by
THE PENCE PRINCIPLE

Check out Aaron's other cool stuff!!!

Quite interesting. Makes quite a bit of sense.

Dowries. A nice concept. Can you imagine the discussion with the future FIL?

"Sir, your daughter is $120k in student debt according to her D&B. How do you intend to pay that off?"
[blank stare.]
"I am also requesting a million dollar divorce indemnity policy in my name."
[more blank stare.]
"A 1000 shares of Weight Loss in case she gets fat."
[more blank stare.]
"$20k for the professional when she refuses frisky business."
[FIL rises, reaches in closet, walks up stairs....]
Pop, Pop, Pop!
[FIL returns, sits down, reaches for his beer...]
"Guess you will have to keep looking son, mine I put down for stupidity."

I chat with a couple of women from foreign countries. There are no feminist movements going on there and they are tough as nails and fiercely independent.

One rumble I've heard is that kids who are attending school from home are exposing parents to the bullshit propaganda that teachers are trying to indoctrinate the young with. If even 10% of families break away from the Wilsonian/Prussian indoctrination complex, that should dramatically increase the number of women prepared to be good partners in the corporate structure of a household.

That said, as far as I can tell the 'quiverful' fundy types are doing their best to embrace the legalistic / Old Testament style of religion and upbringing, rather than anything having to do with the whole 'wise as serpents' thing that Jesus commanded.

Co-habitation is not an option is some jurisdictions.
Even just dating while living in separate places is not safe.


In British Columbia... Some things the court has said are marriage-like include being intimate together, celebrating holidays together including exchanging gifts, vacationing together, having pets or children together, and sharing household and family duties.

The Family Law Act in BC applies to everyone who is considered a spouse ... Spouse is defined in that act as a person who is married to another person OR has lived with another person in a marriage-like relationship for a period of 2 years.


So you don't even have to live together to be dragged to family court.

True. Dowry could be a new house that father of the bride builds for the couple and I know of one such example. But rare are the fathers who have the money for that.
The trend is going to continue and to end it, we need to have not one pussy pandemics, but 3 strong ones + 1 world war.

I'll admit, a dowery would take a load off my mind, as long as wifey-poo doesn't demand that I share it afterwards.

Sadly the only thing that will make marriage a thing happen again is societal collapse and the government checks no longer forthcoming.

I think the dowry that the bride's father pays is in some Asian cultures because in the Muslim religion the woman WINS the dowry, it is proof that the groom issues that he can support the bride and provide for a family. And Muslims are more than a billion.
The woman wears white because it matches the kitchen.

The tribe has no use for dowry, and as a result it sure ain't gonna happen any time soon!

They yearn for the "good old days" of their Messiahs - Lenin and Stalin. And now with the Kung Flu, they have added Mousey Tongue to make it a troika. Or their very own Holy Trinity!!!

What about the bride price or bridesweath?

If women dont make the cut personalitywise then they get left on the shelf. Certainly that will increase vetting.

Women being driven to suicide and murder:
https://en.m.wikipedia.org/wiki/Dowry_death

And female babies being killed. Leading to a sausagefest.

What woman or women hurt so much to make you hate them so much?

Its absolutely a bad Idea if the dy

Its an absolute disaster if the dysfunction of the dowry system in India is any indication. Dowry are why sausagefests existed in Ancient Greece and Rome due to daughters being liabilities.

And even in Medieval Europe its a financial disaster especially for poor fathers. Not least the wealthier fathers.

Nobody hates rattlesnakes. That doesn’t mean one shouldn’t stay away from them.

This was early 90s (yes, we are still married and happily)
My spouse felt he was getting a good deal (I must assume)
What he could not do is demand the world create the conditions to give him a good deal in the marketplace.
He chose the good deal.
-Liz out

Just to add, I was still in school when we married...didn't quite have the degree yet (I did in the next year and a half).
Point stands.
The market speaks.

So Cappy, why do you continue to troll your readers by letting the one-note troll Jennifer continue to post her usual piece of bullshit?

Jennifer asked the exact same question as last time. Aaron didn't answer before (since she was clearly trolling), what makes her think he's going to address her this time? Someone's starved for attention.

Or maybe she knows he won't reply, so she feels safe dropping her bombs and leaving.