Back of Napkin Economics

I posted this exactly a year ago on February 28th, 2007. Thought it timely given all the recession talk and bad news coming from Wall Street. It reminds me of Sinfest where the author of the comic keeps waiting for one of the larger media firms to pick him up when he's supremely talented. Anytime you nearly bankrupt banks admit you need help, I just want to let you know I'm here for you...for a fee...and my dog, you have to let me bring my dog to work...and my cheerleaders too, they have to be part of the deal. I need them for moral support when I'm working. "Go Captain Go! Predict the economy! Model those interest rates! Make middle aged real estate developers cry! Go Captain Go!" Oh, and the office of your president that made you lose millions, I'll want that too. Matter of fact, while we're at it I could really use a bank paid squire with a trumpet to announce my coming. There will no longer be power point presentations. He'll read from scrolls and announce my findings at meetings. Any way, here's the original post, A YEAR AGO MIND YOU NOW!

I always fathomed in the back of my mind kind of a "Museum of Economics" where various artifacts of different economic lore would be stored.
In particular the napkin that Arthur Laffer used to draw his "Laffer Curve" on (although he does not recall writing it on a napkin).
But why does Arthur get all the attention for his napkin? What if I came up with some economic genius of my own and just wrote it on a napkin? Would my napkin then be included in this Museum of Economics? Probably not, but what they heck, we'll give it a shot anyway.
So I happened upon an interesting statistic in The Economist that said for every $100 drop in one's home value, there would be a $3-5 drop in consumer spending. And based on previous research I pulled together, housing looks like it would have to drop by about 33% in order to bring price to rents an price to incomes back in line with historical values; 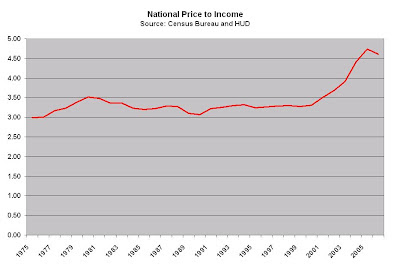 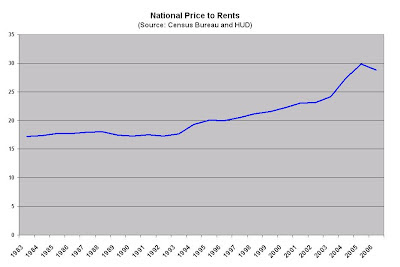 Now the median home is roughly $240,000 if I recall my stats correctly, implying a $79,000 drop in price in order to correct. This translates into 790 $100 increments which (assuming $4 decrease in spending per $100 drop in house price) results in a $3,160 decrease in consumer spending per house.
According to the Census Bureau there are 126 million housing units which results in a decrease of $400 billion.
$400 billion out of a $13 trillion economy suggests a contraction of 3% which would be enough to send us into a recession.
Now to emulate Arthur Laffer and increase my chances of having a piece of my economic work put into the future Museum of Economics (as well as my chances with the laaaydaaays), I put these quick calculations down on a napkin (actually it toilet paper because I couldn't find any napkins in the office). It's only a matter of time that urban legends spread about me and my napkin writing prowess! 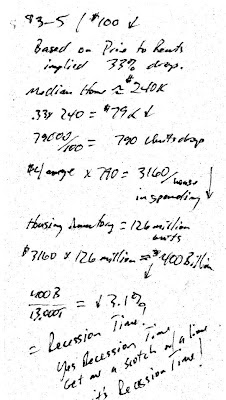 Posted by Captain Capitalism at 10:32 AM

You only summed up the facts, which is not comparable to formulating a new theory like Laffer did ;-)

If you could show that there is a permanent, not transitory, rise in prices, so that we don't have to worry about a looming recession anymore, that would make you famous!

Furthermore, one can already see that the contraction expands over several quarters, or even years, therefore making the contraction somewhat smoother. I think that's what they call "a soft landing".

tell the masses what they want to hear.

What, you think I'm a politician?

Actually
here in México we have an Economics Museum. Its called MIDE or Museo Interactivo de Economía

You're kidding! That's AWESOME! What city is it in? That alone would be worth taking a trip. That, along with my mission to visit every Federal REserve would certainly impress the ladies.

its on Mexico City
A few blocks away from the city square, the catedral and el Palacio Presidencial. It is very cool, but very basic, ideal for first year economics students. You should visit!!

I'm somewhat reluctant to visit Mexico with the crime and so forth that's been plaguing the northern provinces. That being said, Mexico City is more to the south, and I always wanted to smoke a good cigar while watching a bullfight. I might just have to visit. I will not deny that the main attraction would be the economics museum, though. Some how I just don't get that many dates with the girls. Don't know why.