Every Woman Who Ever Voted Democrat Ever 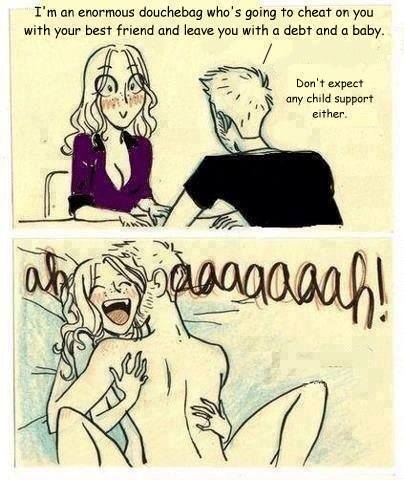 Posted by Captain Capitalism at 7:38 PM

I would posit that they are also every Rove Republican "woman" as well.

Very true! Reminds me of and excellent little book for men titled 'The Predatory Female' (Hard to find now and very expensive online. Many excepts available on the web however.)

And all of us Red Pill men know what happens when the women like the one portrayed here reach thirty, get thrown off the Carousel, and slam face-first into The Wall...don't we?

Who exactly is the government going to cheat on her with?

From the point of view of a woman who used to believe in liberalism (and also pacifism, inclusion, tolerance, and all the second chances in the world), that's pretty much spot-on.

They basically told you they were going to fuck you over (if not in quite such explicit language). Then they fuck you over. And then, you're so fucking stupid that you sit there, feeling stupid and angry (not that you have any right to be angry, because all they did was what they told you they would), wondering if you ought to go out and shoot yourself for ever having been that completely stupid.

Cartoon is very typical. DNA study in Britain indication 20% to 30% of children not related to the 'identified father'. Near zero woman will admit to more than 3 lifetime boyfriends. Even women in their forties who can suck a tennis ball through a garden hose claim 3. Point is, deception is the name of their game. No guilt at all. It's in their DNA.

MC said...
"...wondering if you ought to go out and shoot yourself for ever having been that completely stupid."

I've observed that comparatively few women have the honesty and deep introspection to do that. The foolish majority usually refuse to take any responsibility while denying all culpability for their actions, declare themselves "Victims", and will instead blame ALL men (particularly the 'Good Men' whom they usually refuse to interact with, anyway).

sometimes the men go in with perfect intentions but women divorce just because uncle badtouch has got their back. college tuition, rent, child care, disability, you name it, she's got it..... so why bother with a husband that has even the most marginal and minor of expectations. uncle badtouch forks over money, forces dad to fork over money, and has absolutely zero expectations or demands. this is a real flesh and blood person i know.

Thanks for the link, Anon!

Then guess who they look for to support the offspring? That's right, the guy without kids!

The Carousel does indeed spin round and round, but at some point her declining beauty will restrict her as The Carousel does have an age limit- for the prime and the ripe. Like Take The Red Pill Said...once they hit thirty they get off the ride in hopes of hitching their cart to a "real horse". Most never make it to pasture. Yet, some try to get back onto The Carousel. To feel young again; to have that comfort in knowing they have access to the plethora of willing horses eager to service her for as long as she wants, for The Carousel is always there...spinning for the endless cycle of young new riders waiting their turn.