What Would Happen to the Federal Deficit If Interest Rates Increased?

So the ole Captain went online because he couldn't sleep and dusted off his ole Excel skills Downloaded some data series and went to work.  And it's basically what you'd expect.

I ran two different scenarios.  One where the average interest rate on federal debt was 4%.  I chose this because that's what it's been historically and would provide us a good "control" variable.  I also chose 8% because if I was a lender that is the MINIMUM I would demand for a bankrupt, insolvent POS like the US federal government.  And here are the results. 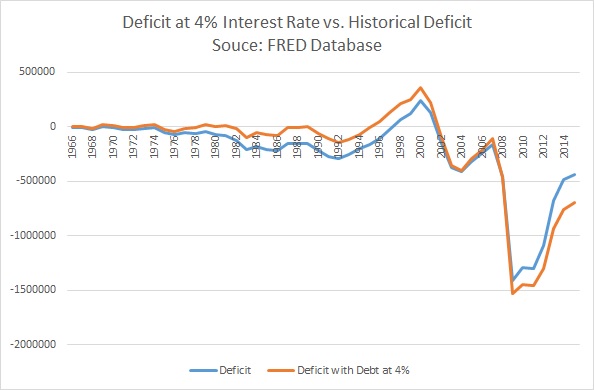 As you would expect artificially low rates that the federal reserve charges the federal government has understated what would have normally been our national deficit.  During the crisis and the "recovery" we could have expected to shell out an additional $200 billion a year on average during Obama's entire presidency.  This would have naturally added to the debt, further increasing deficits, but I was too lazy to calculate that.

Of course, this isn't the New York Times, this is Captain Capitalism.  An actual reputable source for journalism.  So like all good journalists we know that we should convert this to deficits as a % of GDP. 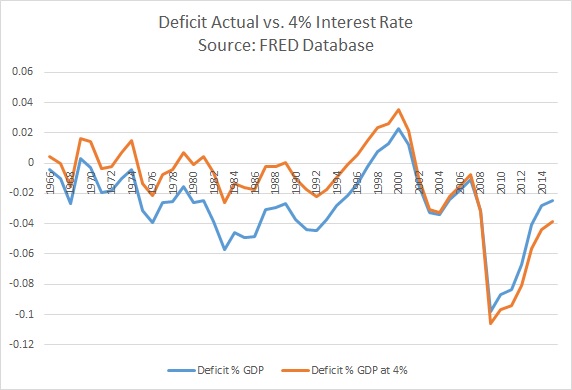 This gives us a bit better perspective showing we'd still be running deficits around 4% GDP had the creditors of the US federal government had the slightest bit of self-respect and demanded more than .000035% interest on their bonds.  Let us be clear.  It is only the shenanigans of the central bank and the fact that foreigners are even "more sucky" than the US that the federal government can get away with paying such a paltry level of interest.

Finally, what if the federal government was in the real world and did not hold the world's reserve currency?  Well, I would at minimum charge an interest rate of 8%.  Truth is, I would never lend to an entity in as bad of financial shape as the US government.  But let's just humor ourselves and assume 8%.  Well, shucks howdy! 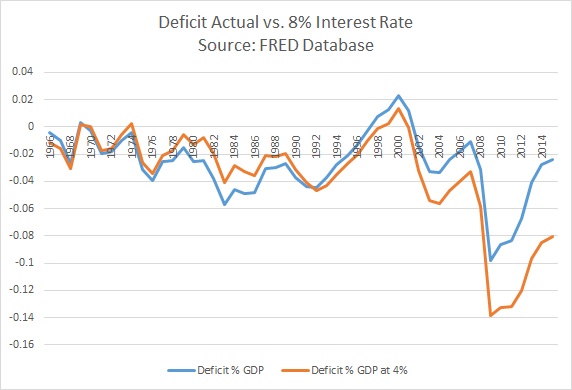 What I like about this chart is it really shows you how the interest rate wouldn't have mattered until 2000, especially, since the financial crisis.  If there was any sanity in the bond market, the federal government would be running deficits of nearly $2 trillion each year since 2009.  That would be an absolutely unsupportable 11% GDP deficit for 7 years running.  Obviously, this added debt would be added to the total debt and creditors would have stop lending to us long ago.  But let this be a lesson to the LUCK, not SKILL that has spared the US a fate like Greece, Spain, or Japan.  It is ONLY because we have the world's reserve currency that we avoided this mess and it has nothing to do with Obama, the federal reserve, Paul Krugman or any other idiot claiming responsibility for this "recovery."
Posted by Captain Capitalism at 6:00 AM

Oh, charts. How I've missed you.

The us is not avoiding it's fate.
More and more people fall into poverty. The world economy is not producing enough wealth to make up for the quantitative easings of the USA and of other countries in the world.

The entire world is slowly sinking into a Zimbabwean scenario.

Finally, Stein's law tells us that this situation will not last forever. It is only a question before it all comes crasing down.

You can't keep printing money while not producing real wealth and hope to get away with it forever.

Sooner or later, revolts and wars will bring the whole thing down.

Ron Paul and Peter Schiff were the prophets of the last chance and history tells us that nobody ever listens to prophets.

We are not avoiding our fate. It is just happening on such a large scale that it appears to be in slow motion.

Zimbabwe was a firecracker so it happened fast.

The US debt is a supervolcano disaster so it is happening very slowly on a large scale.

The FED is a financial Yellowstone caldeira in the making. So is the Eurozone.