The Crowding Out Effect

So I decided for my own curiosity to test whether or not there is a crowding out effect. And take note young aspiring male economists, it's stuff like this that makes picking up chicks easy. So when you go to the clubs or the bars or dance halls and you approach a girl and she says,

You can say with confidence and a smug smile,

"Well, baby, I tested whether or not there is indeed a crowding out effect."

Anyway, for those of you who are not familiar with the crowding out effect it is the theory that when the government borrows all this money to finance federal deficits (like the ones we have now) that means it takes away these loanable dollars from private citizens and business and thereby increases the interest rate.

To test this I compared the government budget balance (as a percent of GDP) against the real interest rate of 10 year constantly maturing US Treasuries (ie- took out inflation). 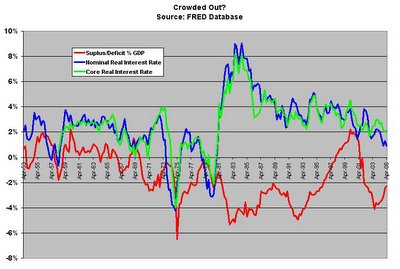 And these correlations/trendlines (10 year interest adjusted for core and nominal inflation); 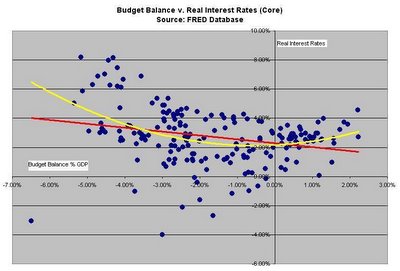 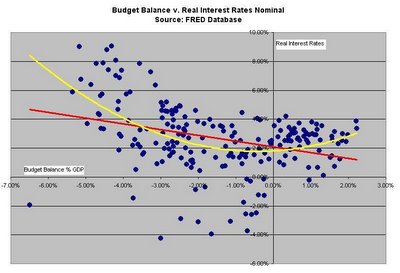 Notice with the polynomal trendline there is an uptick in the correlation with budget surpluses and interest rates. It suggests to me that the economy in those periods was growing so fast the natural private sector demand increased interest rates, while at the same time a booming economy resulted in an enlarged tax base increase budget balances into the black.
Posted by Captain Capitalism at 3:12 PM

You know aaron I just discovered your blog recently from one of the old Orlando Ochoada C.R.'s and I must say I'm both very impressed and ultimately ashamed. Ashamed I say because I've always derived my political motivations from the social side of conservatism. On defending the economic aspects I've since found I'm woefully lacking in ammunition. Other than yelling "yea well...Check dis' wealth of Nations cuz' Adam smith is for rizzo beyatch" I really lack good factual support for my blind but fervent faith in captalism, and I wish I'd taken the time to learn economics. So in response to my limited reading of your blog, let me simply say"...er...HUH?!???"

And that's the weakness of most Republicans and Libertarians. Intuitively we know there is no free lunch, but we rarely take the time to prove it.

I've often had great angst with the religious right in that their arguments when trying to pursuade the left is "well GOD meant it this way."

Well, cripes, that ain't going to convince nobody.

The good news is you don't need moral arguments to prove capitalism is the best system. You got history and limitless data to prove it. It's just an empirical fact.

It is largely why I have never lost an argument about politics and economics, because I never argue anyting that I don't know for a fact to be true.

good post capt. Captain and Mayor, just want to let you know that more tidbits of data about economics resides in my latest article (which I like to Captain and Doink) at www.fromthepen.com. Check it out. Capt, your famous now.

Yeah I tried to get to your web site but I had to log on or something?

When we discovered USA Today's photo manipulation of Condi Rice's photo, some of the big web sites picked up on it and sent 30,000 visitors to our site in one day, causing our site to crash. It took a week for it to get back up.