I remember these charts were quite at the cutting edge of economics and finance about a decade ago. Now it seems the rest of the population is FINALLY getting around to paying some attention to the merits of adjusting everything as a percent of GDP. Regardless, looks like debt as a percent of GDP is going down. Of course this is household debt and this is primarily due to people filing for bankruptcy and more than this decrease in debt has been offset by the federal government's increase in debt, but hey, at least it's going down. When it reaches it's 1950's average of 25%, let me know. Then I'll start reinvesting in dollar denominated assets. 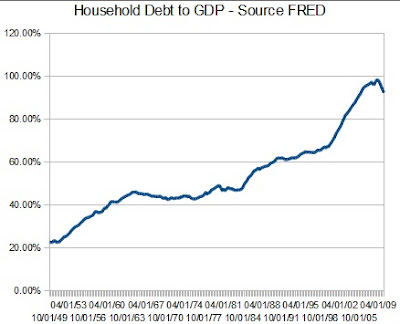 Posted by Captain Capitalism at 4:40 PM

Calculated Risk discussed this subject not too long ago. Charge offs, bankruptcies, and foreclosures are definitely bringing household debt down, but they don't explain all of the decline. People are indeed reducing their debt.

Lets see the same chart with a few additions. First official federal debt portion per household, then throw in all the government unfunded liability debts. Next add in State debt per household. Lets not forget municipal debt. Student debt, well lets leave that one alone.
The level of debt from all the different sources in the USA, is simply staggering.
Then to top it off, Washington is trying to solve a social debt problem, by borrowing even more money.
It seems everyone in the USA is addicted to debt. And yes, at some point in the future, breaking the debt addiction habit is going to be painful.

That should be scary enough.

Makes you happy and powerful feeling at first, is hugely addictive, and has huge health risks and costs to society.

Channeled as a strictly controlled item, like pain killer , it's a good thing.

Hello Captain, I came across your blog while doing research at FRED. I use it too. Great resource. You have a great blog. Great job!