A God given right to all people is the freedom to drink. But how much the government infringes on this precious and life-enhancing right varies depending on the BAC limit enforced. The theory governing this index is that the more people are allowed to drink, the happier and thus more productive they are.


While not exactly scientific the BAC Freedom Index is an astonishingly accurate predictor of economic growth. Countries such as Japan (where more for biological reasons) and Sweden (more for Scandinavian reasons) have the BAC limit set so low that you literally cannot legally drive after one drink. This, along with very high and disproportionate taxes on alcohol in most Scandinavian countries, forces people to stay at home and drink, rather than spend their money going out, meeting members of the opposite sex, thereby keeping their economies from growing.
Whereas in countries such as the United States and Ireland, one can very well drink themselves silly, flirt with untold numbers of the opposite sex, and still be allowed to drive home. This has not only resulted in some of the best drunk drivers in the world, but some of the highest GDP growth rates in the developed world. 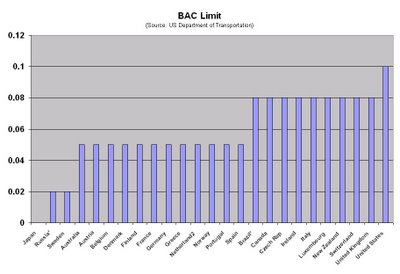 This is confirmed when we correlate GDP growth rates against BAC limits. Countries with more liberal limits tend to have higher economic growth. Those restricting their population to the point they cannot "go out and have a drink" because it’s effectively illegal, have smaller (and in the case of Russia) shrinking growth rates, all of which results in a remarkably strong correlation coefficient of .43 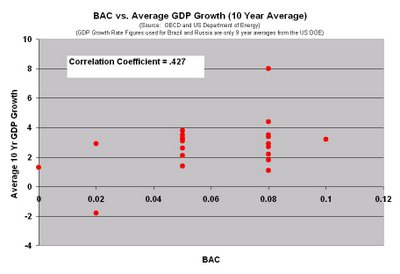 Thus we have no choice but to conclude that drinking is vital and necessary to economic growth and government policies should endorse it and it is your patriotic and American duty to drink.
Posted by Captain Capitalism at 6:30 PM

GDP growth correlates with transparency (the TI index), the TI index correlated strongly with the political freedom index (Heritage) and I suppose that the Heritage index will correlate with the BAC. So you could control for any of the above. Otehr than that, we're on to the real plan of the illuminati!

Otherwise, too bad we don't have enough lags available for a Granger-causality hypothesis.

another find argument that drugs do indeed make the world go round and that the war on such is lost.

People of north tend to be heavy drinkers. Northern Euorpeans, Northern Chinese, ect tend to be hard liqor drinkers and allow them drunk like mud.

Can you please post (or link to) a larger version of these charts? (They are not very legible at this small size.)

I always have a few when I write and usually, barring running or working or driving, there is a steady supply at my bar.

Was one of the bill of rights "freedom to drinking privileges".The truth is this country was practically based on it which apparently shows on the chart.lol, Yeah long live American freedom I guess.

P.S. If you didn't get my last comment under "the Isreali approach" I love this blogg. lol.

Yeah, the blog does rock, I have to admit. Glad you're aboard. And yeah, the rum trade in itself is a fascinating economic story in colonial American history.

I do get everybody's posts, I just don't have time to respond to all of them.

This is the funniest blog i have ever read. How sad that it is not just a prank. Because it sure looks like it.
I don't doubt for a minute you make good charts. But knowing your way around Excel is apparently all you can.
The BAC correlating with economic growth? Now that is funny. I could find figures on sexually transmitted diseases correlating better with actual figures than this. Or rainfall in the Midlands. Or crime at gun point. Or an inverted Phillips curve.
And another thing, having read your post where you discredited Norwegian "socialism" by pointing at oil. Do you know why the Norwegian Oil Fund is so large? Because they save everything ans spend only 4% percent a year. And they have Europes highest entrepreneurship-ratio with 100 000 new businesses in 2006, of a population of 4,5 mill. You do the maths. And by the way, the BAC in Norway is 0,02.
So you know.

It is a prank, that's why everybody else found it funny.

There are two and only two things of value in this world. There is productive accomplishment and there is having a good time. In other words, there is work and there is play. The problem I have with social conservatives is that they are deluded enough to believe that there is some other value in addition to these two. This is the reason why social conservative irritate me even more than liberal-left, whom I despise.

Cap I was recently informed by a man who helps determine alcohol legislation in NSw (Australian state) that in about 5 to 10 years the BAC will be 0.

So here is a chance for us to test your theory. If you hypothesis is true then NSW's GDP should start to slow after this law is introduced and maybe even decline.