Not Another Baby Boomer Drama

Despite the star power and all the hype, I predicted that Lions for Lambs would fail. And the reasons are many, but primarily two;

1. It's just isn't that great of an idea for a movie. People don't want to watch another movie thinly disguised as political commentary on the war. They get that everyday in the media.

2. I don't think the baby boomers that are now currently heading up the movie divisions in Hollywood, as well as Robert Redford, realize that their time has come and is starting to enter the "gone" stage.

Other generations, whose purchasing power has been increasing as we've entered the labor force really don't know or give a damn who Merrill Streep is. While she may have gained some notoriety in some 1970's movies, she, like Robert Redford are has beens. Not that they're not great actors, but over half the population associates closer to Tom Cruise than Merrill Streep. And seriously, the last movie I liked that had Robert Redford in it was Butch Cassidy and the Sundance Kid (which I think is the last NON-political movie he made).

Thus you have a lame premise, actors that are not timeless like Cary Grant or Harrison Ford, heading up what is essentially a political commentary.

Oh goodie! Let me get in line with all the other AARP members to shell out $9 to be bored off my ass. 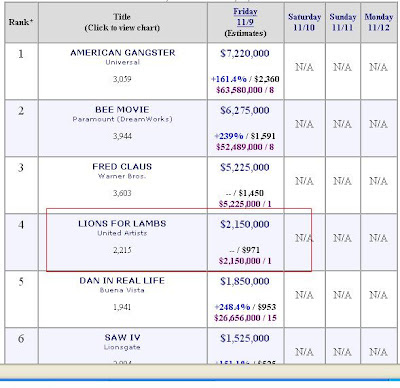 the whole point is that the general American population, boomers, x'ers, y'ers or the Greatest, don't want to pay to be lectured to about politics, especially from the likes of Redford and the only people that are going to go see it are people who already agree with the film's political premise. And that if the big time Hollywood power brokers that be want to make big time bucks, they better realize that The Rolling Stones at the Super Bowl, Rambo XXIII, and Lions for Lambs no longer appeal to the masses for (I know this will hurt some of you)...

they're no longer cool.
Posted by Captain Capitalism at 3:27 PM

"Three days of the condor" is a secret pleasure of both Jason Lewis, and myself. Probably the only thing we both agree on.

"The verdict" is his best movie.