The Real Reason Al-Qaeda Thinks They Can Win 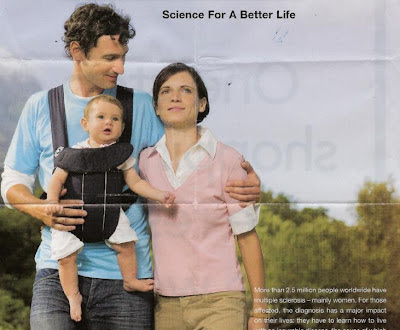 Will somebody please tell me what the heck this is???? And what man succumbs to this torture and humiliation? Seriously, I had a dog, very proud dog, named Pretzel. Small wiener dog, but still thought he could take on the world. And if you dared to put on a coat or shirt of some kind to protect him from the Minnesota winters, he would droop down in shame, grumble in a half growl/whimper as if you had put pink bunny ears on him, utterly ashamed of himself. Respecting my dog's wish to be manly, I never put that shirt on him again. And while he was shaking and shivering in the cold, at least he had his dignity and manliness.

Seriously, think about it. Al Qaeda would have thought twice about attacking us if Patton or John Wayne was in charge. And John Wayne and Patton would never be caught dead in one of these contraptions. But oh, no. Now me and the men in my generation have to be sensitive. We have to wear these reverse, pregnancy male backpack thingies. I'm sure it's a great deterrent to America's enemies. Maybe we can get themselves to laugh at us to death.

Ug, OK so I got a couple posts on this about "how dare you insult somebody with MS"

People, it's and ADVERTISEMENT FOR FOR ROCHE DRUGS. The woman is a model, so is the guy. They aren't actually married. I don't know these people. It is a SCANNED IMAGE from a magazine. The post is not about MS.
Posted by Captain Capitalism at 11:02 AM

Are you sure the designer didn’t borrow the design from Al Qaeda’s “How to use babies as a human shield” book?.

I kinda feel sympathy for the man who is empathetic to his wife who has MS. If you eve tried to shop with a baby that refuses to sit still on a shopping cart, you will know how convenient it is to have two free hands (no to mention safety of the child). (Uh-Oh , I feel the cynic in me kicking, so I will just stop)

But I do agree with your assessment on the “reverse, pregnancy male backpack thingies”

The woman in the picture is supposed to have Multiple Sclerosis. When you take that into account it looks like the man is try to support his family despite hardship.

Hey, Cappie, I think you've got it a bit backward. The image I use is the guy in the women's clothing store who's embarrassed to be seen with his wife's handbag. Me? I'm proud to be seen there. It means I have a wife - that I'm manly. The guy in the picture is more man (and more right-wing) because he loves (and lives with, and supports) his family. It's this part the islamic fascists and their running dog lefties don't get. Most lefties won't fit this picture because they don't even HAVE marriages or kids. Most islamic fascists won't fit this picture because the wives are at home cooking, wearing burkas to hide the bruises, while the men are out shooting each other. I agree completely with your point about manliness, but I think in this picture John Wayne would carry the kid, too. OK, if it was John Wayne he'd be running, and they'd be under fire, but he'd still carry the kid instead of using him as a human shield (probably carry the woman at the same time, too). I think this picture is more manly, not less.

I figured it was a call to cure MS so your man won't have to humiliate himself by wearing a freaking baby-pouch.

I agree that there is no reason for a guy to wear one of those things normally, but in the first sentence of the scan it says MS and suggests that she has it in the second. I can only go by what you posted.

I didn't mean to sound like I was biting your head off. The impression the scan left me with was how much I respect a man that looks out for his family through hardship. That's how we will win.

Come on, Cap. Look where they're at--they're in some kind of a park. Probably walking in the grass, making a stroller impractical. Carrying a baby as old as that one wears out your arms pretty quick, but your shoulders should be able to handle it for hours. I know I was very grateful for a setup like that when I went rock climbing with my baby girl (Independence Rock in Wyoming, not something you need rigging for, but it's an adventure with a baby strapped to your chest).

My primary complaint about it, is that this contraption seems to be designed to make a guy look and feel pregnant.

If it were a backpack, then I'd be all for it. But the fact it's in the front just screams at me that we are to now start looking pregnant.