Your Economic Chart of the Day

I had a theory that for lack of a better term I called "Mold Theory" where money is akin to bread. And if you have a social ailment be it crime, poor education, etc., if you throw money at it, it's like throwing bread on mold. All you're going to get is more mold. And I highlighted this by comparing government spending on social programs versus the most basic form of social ailment, crime; But another interesting example of "Mold Theory" was found here.

Apparently the more aid that is sent into Palestine, then the more homicides there are. 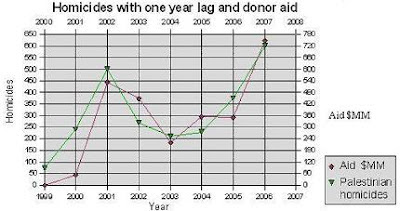 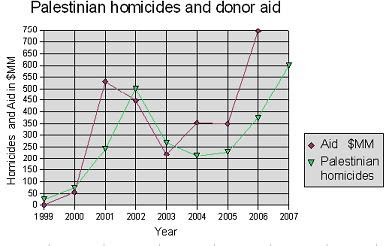 I'm trying to think of a third variable that would cause aid to go up and then a year later cause homicides to go up, because I'm 50/50 on the aid causing the murders, but it wouldn't surprise me.
Posted by Captain Capitalism at 10:30 AM

wow... this is devastating. There might be a third variable causing both, as you say--- but even so I doubt that is the whole story. I wonder what the various connecting variables are between aid and homicides.

A defender of social spending would argue that spending doesn't improve conditions immediately, but only after some months, or even years. If you take a second look at the chart, you will see that crime rises after a period of time when social spending has been cut.

This might be unrelated, but I figure you would want to know about this.